This is a guide to Dark Gaming’s PvP, things unchanged from Vanilla PvP will not be listed

Weapon and armor changes, bans and others can be seen in the PvP manager website

Learning the meta may be difficult for some people since it is very different from a normal meta, this guide was made to teach people the meta that Dark Gaming has.

Wings, Hero Shield and Celestial Stone/Shell should always be equipped.

You should use your accessories with the Menacing prefix.

The following Armor Sets are good for any kit.

You can combine different armor pieces and accessories to maximize certain stats.

These weapons have decent damage, can be used in enough situations, are fast enough, and are good in general as weapons.

These weapons are not recommended as they cannot be used in enough situations, are slow, or are overshadowed by other weapons

Can’t decide on what weapons or equipment use? Look at some of these examples

Load them with /loadout load

Want more examples for armor? Refer to the armor comparison spreadsheet which has more armor pieces, their stats, and viable armor combination examples

You should add spaces between spoilers because some spoilers mix, and it’s a bit harder to read. 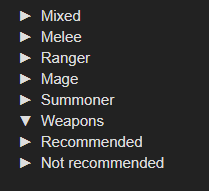 I also think you should use Headings so you can get that Table of Contents.

Editing the poop out of this.

Tbh, much more can be written about:

This is a guide to Dark Gaming’s PvP, things unchanged from normal PvP will not be listed

I know this was written, but there is a lot more to PvP besides Armor Sets, Weapons, and Ammo.
(The only things changed by PvPManager.)

It’s just that writing anymore is going to be Painful considering that it should be formatted to look nice.

For some reason, the images’ alts are “meter-pattern”

Also, these are recursive

In order to append images to tables, they must have meter-pattern\.

I’m not that good, but am I allowed to add Rapid as a modifier for Stellar Tune for the speed factor?

considering that all it does is make the notes move faster, i would say demonic is better

all it does is make the notes move faster

Is it? I noticed the 13% increased casting speed in practice from Rapid vs. Demonic, which checks out because that’s how much the speed increases by with in - game rounding taken into account.

Our forum uses tables to describe the function of digital synthesizer modules. In the first column, we use a picture. Because Discourse inserts a | between the file name and resolution, it breaks the link to the picture when using it in a column. ...

I don’t think it requires “meter-pattern” specifically. All you need is to escape the pipe(|) by adding a forwards slash(\) before it

You can’t use all pieces of the shroomite armor, nor the vortex, meaning no invisibility set bonus. Also, Blanc told me that its not ideal to use Psycho Knife and that he is gonna remove it.

aww, i use psycho knife to not get killed while im chatting

not that it’s hugely useful, with solar armor

You can’t use all pieces of the shroomite armor, nor the vortex, meaning no invisibility set bonus.

In regards to this, I was just thinking about throwing out suggestions earlier.

There was a time where it was banned from use after that statement (I recall being frozen by it), but then it was enabled again. Though, either the stealth from Psycho Knife only works clientside or the player “Undercover” is cheating as they found me 3 separate times fairly recently when I was hiding in stealth with it trying to type without being bothered, and there weren’t any indications of me being around at all.

Bitwin also somehow homed into me every single time I tried to hide from him with it, but other people have gone right past me so I think it isn’t clientside, or maybe I’m just incredibly lucky.

Edit: nvm, it shows your healthbar

Why does it say “Outdated, use the chests at spawn”?

Also I think the Red Riding set was unbanned and buffed/nerfed.

The Red Riding Dress has been unbanned.

Also, which chests are you referring to?

Since PvP is in a new world, loadout chests work now, however I think Blanc did only one loadout chest which is the ranger class.