Enemy Gamer’s PvP Handbook: How to make a good loadout

Swapping, the act of switching between weapons based on your current situation, is one of the most integral skills to learn in order to become a better PvPer, not just in Dark Gaming.

Swapping is also a tough skill to learn. I’d say it has a higher skill floor than aim and movement, mostly because you have to manage at least 8 different weapons in order to maximize efficiency.

The reason I’ve been holding off on a guide like this is because explaining the ins and outs of swapping is difficult, and also I’m not a master at swapping myself, I’ll try to explain swapping as well as I can.

I’ve explained in a previous guide that you should have a weapon for most scenarios, so I’ll briefly summarize what you need here.

At the minimum, you need a weapon for close range, mid range, long range, an area coverage weapon, an anti-rush weapon and a wallpierce weapon.

Knowing when to swap between these weapons and swapping accordingly and quick enough is why swapping is a difficult skill to learn. It’s all based on recognizing scenarios.

You shouldn’t worry about swapping as quickly as possible if you’re just starting to learn, you should focus on swapping to the right thing at the right time, and once you get good at doing that, you can focus on doing it faster. Basically, once you’ve passed the learning process, you can tackle the execution process.

The execution process simply requires practice. Establish muscle memory, and make sure to remember what you learned in the learning process.

If you struggle to recognize scenarios, I’ve provided a few video examples of some common scenarios below. 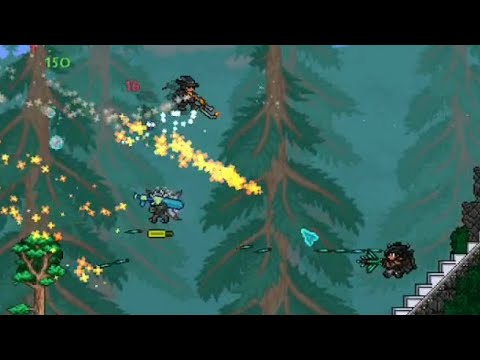 In this clip, my opponents are still at the left side of the arena. I do a bit of scouting with the sniper scope, before switching to Bat Scepter, which is a slow projectile area coverage tool, and then to Sniper once i spot my opponents

I like to use Bat Scepter to cover an area while my opponent is off screen. Most people use it as a wall of projectiles, but the range I’m using it at is when my opponents are off-screen.

Once I see my opponents, I swap to the Sniper and start peppering them with shots. It’s obvious Sniper is a long-range weapon, so it’s obvious for me to bring it out here. 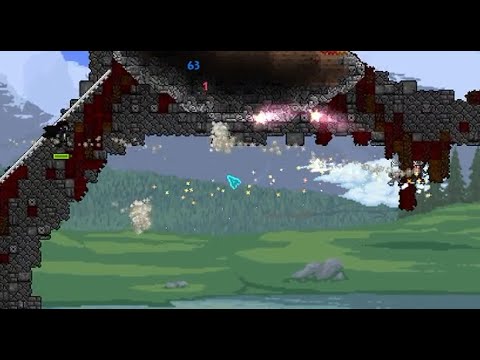 This is another simple scenario. I chase my opponent into the corner, and as soon as i do so, i start using Aqua Scepter (ignore when i swapped to Heat Ray halfway through that interaction).

Aqua Scepter (before 1.4.4’s range buff) is built to be Mage’s equivalent of the Paladin’s Hammer. It’s my best option at close range, and considering how long I was close to my opponent, I used it for quite a while.

(This clip is relatively quick, i only focus on the bubble gun hit into betsy wrath hit)

This clip is a double example of good usage of Anti-Rush and Area Coverage weapons. I predict that my opponent is going to use the slime mount while directly above me and fall below me, so i bring out the Bubble Gun to catch him on the way down, before swapping to Betsy’s Wrath when he’s off screen below me.

I shouldn’t have to explain why I used Bubble Gun here, it’s quite easy to understand why.

Betsy’s Wrath is a weapon with high gravity, it’s most often used to catch people who are below you, which is exactly what I used it for.

You may be wondering why I used scroll wheel to swap between weapons in the scenarios above. My reasoning is that those clips are old and I don’t use scroll wheel anymore, I use keybinds.

99% of pvpers utilize keybinds in order to swap between all weapons on their hotbar. Keybinds are a vital part in swapping well.

The most important keybinds you’ll need are keybinds for hotbar slots 5 through 0. Those are the farthest away from where your left hand typically is (near WASD) so using the default keybinds is not a good idea.

Fortunately, the entire bottom left of your keyboard (Z, X, C, V) is unused, so you can use those. Q and F are also unused as well.

Here are a few more tips for keybinds:

My most important advice for swapping is to have your most commonly used weapons have the easiest to reach keybind. 1-3 and Q are really easy to reach, so you can put vital weapons like Paladin’s Hammer or Heat Ray in those slots.

Learning how to swap consistently has been one of the biggest roadblocks for a lot of PvPers, myself included. With time and practice, swapping well shouldn’t take much brain power, so you can focus it on other things like the people you’re fighting.

I must reiterate that I’m not a master of swapping, but again, I’ve hopefully explained all there is to know when it comes to swapping. If anyone has any additional advice, I highly recommend putting it in the comments.

yall need different weapons for those?

i can just spam dark harvest

you’re going to get shot by a sniper

you’re going to get shot by a snipe

i do get shot by a sniper*

forgive the quote, but this is actually a strategy I’ve never heard of before… I may or may not try it out when i manage to get back to terraria

Thank you for your guide, as soon as I get to my PC next week I am going to try to get someone to train with me pvp (if my social capabilities suffice and depending who is on), if i don’t can train directly with a user I will just pvp after rereading this + movement (which is ok at me) + aim (to train…, i will use HR first then I add more similar things), documenting that on YT, unlisted with a link in discord channel and forum (previous video links will be posted in forum and I will continue).

For other keyboards (most common languages of most common scripts) users:

am i the only person who has Space as jump key…?

i mean here, not in general