I really only made this tier list because I was bored.

Dark Gaming’s armor meta is rather static compared to the weapon meta. Only half of the armor sets in the game are usable in DG PvP, and that’s because if they were all viable, the only differences between them would be extremely subtle stat differences.

However, some armor sets and pieces do provide unique bonuses, which means there is enough variety for a tier list like this to not be boring.

I’ll explain my reasoning for the placements of the armor sets in each section of this guide. 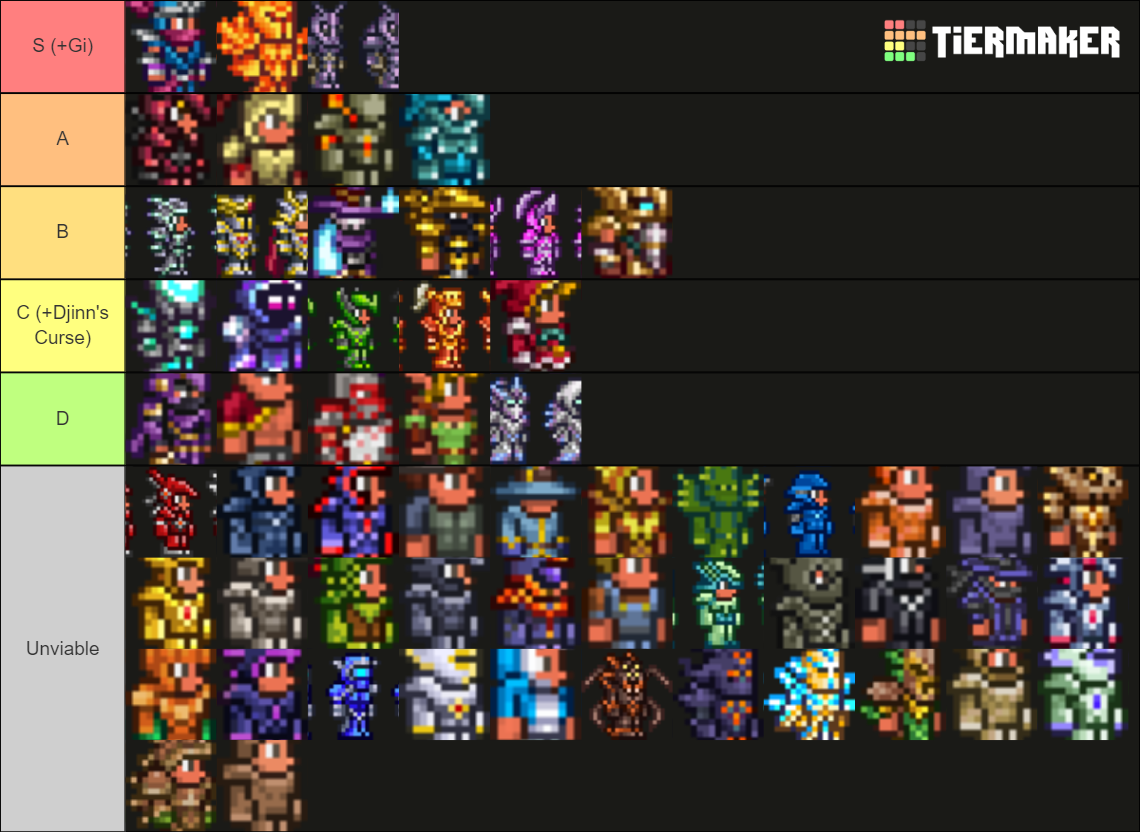 It’s important to note that each armor set’s placement is based on the viability of all its pieces, including helmet variations. as well as if the set bonus provides any useful bonuses.

However, if an armor set has a bad helmet variation or a bad piece, the placement won’t be lowered.

Don’t use these. All of these either have stats that are outclassed by better sets or no stats whatsoever. The only notable sets in this tier are the Adamantite and Stardust. Adamantite just barely doesn’t provide good enough stats, while Stardust provides insane summon damage (22% per piece), but the problem is that summoner sucks and also this set gives little defense.

Armor sets in this tier usually have one pretty useful piece but the rest of the set is trash, or they have good enough stats to not be completely useless but still trash.

Shinobi Infiltrator has decent stats on each of the pieces, but those stats aren’t enough. Spectre has the same problem.

Squire’s is only used for the helmet, which provides regen. Even then, it barely gives any defense, so it’s usually used out of combat.

Monk’s and Huntress’ have one good piece. Huntress’s Jerkin provides insane ranged damage and Monk’s Shirt provides insane melee damage, 20% for both. However, they don’t provide much defense overall, so they’re really only used in glass cannon sets.

Armor sets in this tier have some things going for them, but they are still rather niche.

The Red Riding Set is like the Huntress set but with actual defense. The Dress is one of the most common chest pieces in ranger sets.

Djinn’s Curse wasn’t in the tier list I used, so if you want to know where I’d put it, I’d put it between the Red Riding set and Palladium Armor. Djinn’s Curse is fine, it provides okay stats, but the featherfall it provides isn’t necessary, because you can just drink a potion. It’s a convenience. However, it’s important to mention that the most common piece that provides melee speed are leggings, and Djinn’s Curse provides none.

Palladium Armor is really interesting. The helmets provide mediocre stats, but what makes this set unique is the rest of the set. The breastplate and leggings provide ample magic damage plus a bit of extra damage in all other types. This set probably has the most unique stats out of any set. Also, the regen buff provided from the set bonus exists, and it’s decent.

Chlorophyte Armor has 2 things going for it. The helmets all provide a really good amount of damage of each type, with Chlorophyte Mask especially being rather strong, providing 16% Melee Damage and 28 defense. The Plate Mail provides the most defense out of any armor piece in DG PvP, and it has a bit of extra damage in all types. The reason this set is C Tier is because despite the strong stats, it doesn’t see much use in mixed sets.

Nebula and Vortex armor have similar uses: Each of their pieces provide decent stats for the type of damage they boost, but neither of them are used as full sets. Vortex can’t have a full set because the Helmet is banned, and the set bonus of Nebula doesn’t work, plus you can get better stats from other mage armor pieces.

Now we get into the good armor sets. Full sets of these are actually used, as well as individual pieces.

Valhalla Knight Armor would’ve been C tier if it wasn’t for the fact that the damn chestplate being so good. The stats on it are trash, but the decent defense and the regen especially make up for it. If you like running like a bitch, this is the armor piece for you.

Orichalcum Armor is most often used as a full set, but the individual pieces are good. The set bonus is interesting, providing a chance to double hit someone. The petal hit can be dodged, but it’s never a guaranteed dodge. If you aren’t on the move, sniper shots can deal double damage.

Forbidden Armor provides insane magic damage on its pieces, and for some reason the Robes give 30 defense, which is insane considering it also gives 15% magic damage.

Hallowed Armor is most commonly used for the plate mail, which provides a whopping 33 defense and 8% of all damage. The full set is a gimmick, but it still provides good stats, and not just because of the high defense the plate mail gives.

Titanium Armor is the go-to for individual pieces and their stat bonuses. Each helmet is used commonly for loadouts focused on their damage type, while the leggings provide a large amount of defense and decent damage, perfect for anyone who isn’t going to use a melee-speed boosting legging.

These sets are really strong, not only for what they provide for each class, but how strong they are in mixed sets.

Frost Armor provides good damage for the Melee-Ranger hybrids, which is still a gimmick, but it’s outright better than Dark Artist because each piece provides really high defense, especially the breastplate.

Molten Armor is a Melee-Mage hybrid set, but unlike Ranger-Mage, Melee-Mage is a lot more viable because of the more consistent weapons from each class. The leggings are also used commonly in mixed sets for the melee speed it provides.

Gladiator Armor doesn’t provide any melee speed on any of the pieces, but it’s still commonly used in mixed sets because of the relatively high defense and decent damage across the board. The full set bonus allows you to replace the Hero Shield, but this isn’t seen too often because replacing the Hero Shield gets rid of 10 defense, which is quite a lot.

Crimson Armor was made to be a glass cannon mixed set, with its 12% of all damage and lacking defense. It’s pretty strong, with the regeneration from the set bonus making up for the lack of defense. However, the Helmet and Scalemail are often used in mixed sets, especially the helmet, since you can easily make up for the lack of defense with another high defense armor piece, so you get the benefits of the high damage the Crimson pieces provide without having to sacrifice much defense.

These armor sets are the cream of the crop, the most commonly used and best sets in DG PvP. The best mixed armor pieces/sets belong here.

Beetle Armor is an interesting case. It has a surprising amount of things going for it, despite it not being very good on paper. The Scale Mail is like Forbidden Armor for Melee, plus it provides some melee speed, and the leggings are great for mixed sets. Plus, the full beetle shell set is great for playing defensively. Beetle Armor is in this tier because it provides bonuses for different types of players.

Again, there’s no Gi on the tier list I used, but it belongs between Beetle Armor and Solar Flare Armor. Gi is like if Crimson Breastplate had 10% melee speed. It probably has the best stats out of any armor piece, it’s just lacking defense, which can be made up with other pieces.

Solar Flare Armor is not very good stat-wise. While the helmet and leggings provide decent stats, they only provide so individually, with the helmet providing good melee damage but no melee speed and vice versa on the leggings. Also, the breastplate provides only 13 defense. The reason this set is S Tier is because of, you guessed it, the regen. The regen is so good that even with its mediocre stats, this set is a meta pick.

Crystal Assassin Armor is the ideal mixed armor set. Not only does it provide great stats along the board, including melee speed on the leggings, making the leggings alone a meta pick. What makes this set the best in the game is that it allows you to replace your Tabi, either with another damage accessory, or even Berserker Glove, allowing you to make up for this set’s mediocre defense while providing melee speed at the same time, allowing you to run two emblems (I highly recommend doing so).

No, I’m not going to make an accessories tier list, that would be boring, because there isn’t a lot of variety with accessories.

Also i should mention, even though it’s obvious, this tier list is my opinion.

Also Also, this is the tier list i used: https://tiermaker.com/create/terraria-armor-set-tier-list-14-715821

I should really stop stalling on the swapping guide…

The reason this set is S Tier is because of, you guessed it, the regen. The regen is so good that even with its mediocre stats, this set is a meta pick.

I guess I’ll also bring up the DR, if anything else? The passive 12% damage reduction that the full set has helps it survive a lot, working in tandem with the extra health regeneration.

i forgot about the DR

but the problem is that summoner sucks

i will find you

Hello again I’m no longer ded I’ve just been busy with life recently but I’m happy to be sorta back :3

noice, more productive than what I’ve been doing lmao