Terraria PvP can be very chaotic. When the server’s crowded, you can be easily overwhelmed by the sheer amount of projectiles flying around the screen and the near-deafening audio that can be louder than fighting the Pumpkin Moon with 10x enemy spawns.

Dark Gaming PvP can be even more chaotic when there’s a bunch of competent players on. You can die extremely fast, there’s way too many people to target, everyone is moving extremely fast, it’s like trying to kill a swarm of flies with a pair of tweezers.

More often than not, when you’re in FFA with a lot of skilled players, you’re going to become overwhelmed by the sheer amount of players trying to kill each other with a plethora of weapons.

There is no single answer to dealing with being overwhelmed, so I can only provide tips that should be useful.

Instead of trying to approach the overwhelmedness directly, circumvent it. The best way to do this is to not focus as hard. You can and should put as much focus as possible in a 1v1 scenario, as you only have one target. In FFA, you have several, and trying to focus on all of them at once takes too much brain power, which can cause overwhelmedness.

What you should focus on is whoever is focusing on you. If you’re getting assaulted by a hammer, you shouldn’t worry about having an honorable sniper duel with some other guy off screen. The person(s) who are the most immediate threats to your life should be your focus.

A lot can happen in FFA. There are a lot of players shooting all sorts of projectiles at whoever is trying to kill them. Not getting caught in crossfire is incredibly difficult. Dodge what you can, but you can’t dodge everything.

This is why you shouldn’t worry about dying. You can’t prevent it (unless you really like running, aka you don’t want to play the game). Instead, try making the most out of your life. Go for the most kills, or the most damage. You can still focus on improving aspects of your skillset like swapping and aim, the only thing you can’t focus on getting better at is survivability.

Tunnel Vision is focusing so hard on something that you ignore your surroundings. As you can imagine, in an FFA scenario, this can easily result in your death.

Don’t Be Ashamed To Run

Running away is much more effective in an FFA scenario than in a 1v1. In a 1v1, if you run away, you’re just going to be chased until you die or stop running. It’s pointless. In FFA, no one cares if you run away, because they can still fight whoever they want.

This doesn’t mean you will get away with running 100% of the time, though. Someone still might chase you, although it’s very unlikely. Usually they’ll only chase you if they have a lust for blood, want to revenge kill you, or they have a personal vendetta.

Running can also allow you to have some breathing room. It can give time for your brain to relax. There’s also the immediate advantage of giving you time to regenerate health, allowing you to re-enter the fight without dying, if you really care that much about your precious killstreak.

If you find yourself overwhelmed by FFA even after following these tips, there is one last tip i have for you:

Throw everything at the wall.

Turn off your brain and just spam everything you have. The point of doing so is to conserve brain power.

Also, if you struggle to get kills in FFA in general, turning off your brain will make you do unexpected things, which could lead to sneaky kills.

Randoms are an interesting specimen. If you’ve ever played PvP for more than 5 minutes, you should have a general idea of how they behave. But if you somehow don’t, this short video should give you a general idea: 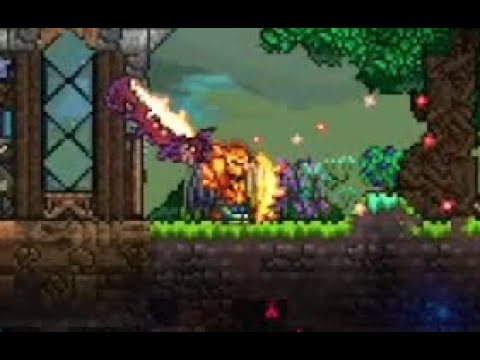 The reason randoms have surprisingly bad movement and gamesense is likely because they are kids under the age of 13 playing Terraria on their mom’s Samsung.

However, there is a rare case where a random can be legitimately threatening. This happens most often when they have a glass cannon loadout, or they genuinely have a well-rounded kit.

In my opinion, the most threatening randoms are ones with a glass cannon ranger setup and/or Soaring Insignia with a Vortex Booster. These randoms will pester you from afar and hover away if you try to brute force them.

Brute force can work more often than not against a random, since you’ll likely out-damage them and can facetank most of their attacks without losing too much health, but threatening randoms can be legitimately irritating.

I’ll be providing some tips to deal with bad and good randoms, as well as providing a tier list for certain weapons’ effectiveness against randoms.

Dealing with bad randoms is very easy. You can approach killing them however you want.

If you want to kill them as fast as possible, be hyper-aggressive with your highest base damage weapon. You should only really do this if their damage output is pitiful and their movement is terrible, which is the case more often than you think.

If you want to minimize the amount of damage you take, pester them from afar with your sniper or mid-range weapon. Heat Ray is especially effective if they don’t have knockback immunity, meaning you can essentially stunlock them from afar. A lot of other weapons are just as good at stunlocking, Heat Ray is just one example.

Most bad randoms will also have very lacking defense, so if you happen to have a weapon in your kit with no maximum damage cap, you can use it to shred randoms before they can react.

Despite the fact that good randoms can be legitimately threatening, they are still randoms, meaning they most likely lack the knowledge of some of the basics of PvP, like gamesense, proper loadouts, or effective movement. These weaknesses are easily exploitable.

You can still pester randoms from afar, just stay out of their range of sight if possible. If you can easily outmaneuver them, staying safe from their wrath is easy.

If they manage to have actually good damage output, they likely sacrificed defense, meaning you can still out damage them with a high dps weapon like Starlight or a Broadsword, but it’s still risky, and you can still take a lot of damage.

If you find yourself getting annoyed by them, do not worry about them, focus on something else. If you let your mental state deteriorate, your skill can be temporarily reduced, making you less effective at not only killing the random pestering you, but everyone else you fight, including good players. 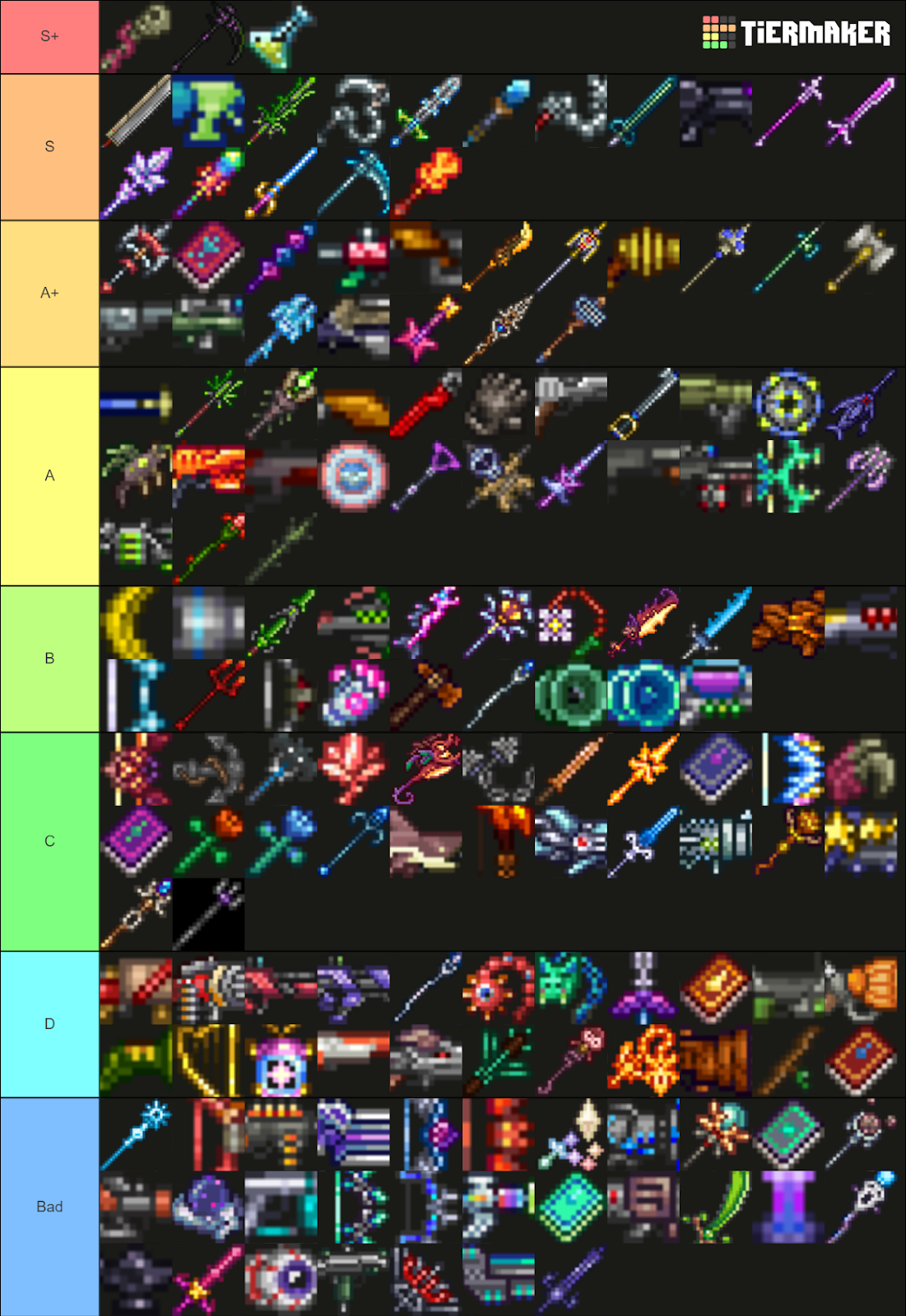 This tier list is a list of weapons I think are most effective against randoms. Unlike a legitimate tier list, the top tiers are mostly determined by raw damage output. Weapons like Death Sickle and Toxic Flask are great for this, Toxic Flask especially since it can stunlock people without knockback immunity.

Low Damage weapons like Heat Ray are still effective because of their ability to stunlock. This is partially why Life Drain is at the top of the list. The other reason is because of the lack of a maximum damage cap.

Like I mentioned, a lot of randoms lack defense entirely, meaning weapons with no damage cap can excel.

Basically, the takeaway from this tier list is that there are 3 factors to a weapon that’s good against randoms: damage, high fire rate, and lack of a damage cap.

If there’s any one tip that you should consider when dealing with FFA, it’s to not focus that hard. FFA is, well, chaotic, so you shouldn’t worry about performing the best you can. You can try to improve aspects of your gameplay, it’s not impossible to do so, it’s just a lot harder because of how overwhelming FFA can be.

The reason randoms have surprisingly bad movement and gamesense is likely because they are kids under the age of 13 playing Terraria on their mom’s Samsung.

What if some of the randoms are mage hover-wing flask spammers and betsy’s wrath?

To deal with FFA Chaos, is to not go to PvP.

“But Shill, that isn’t dealing with the FFA Chaos, that’s avoiding it you clown”

Well, as much as possible, it’s better to avoid the problem you aren’t (yet) involved in than deal with it and have your day ruined.