Before I begin, it’s important to mention that because this is a tier list, there are some subjective opinions, meaning there may be some disagreements. This is my opinion, and I’ll explain the reasoning behind some of my choices.

For this guide, I will post the tier list and then explain each of the tiers and why I put certain weapons in them, from the lowest tier to the highest. 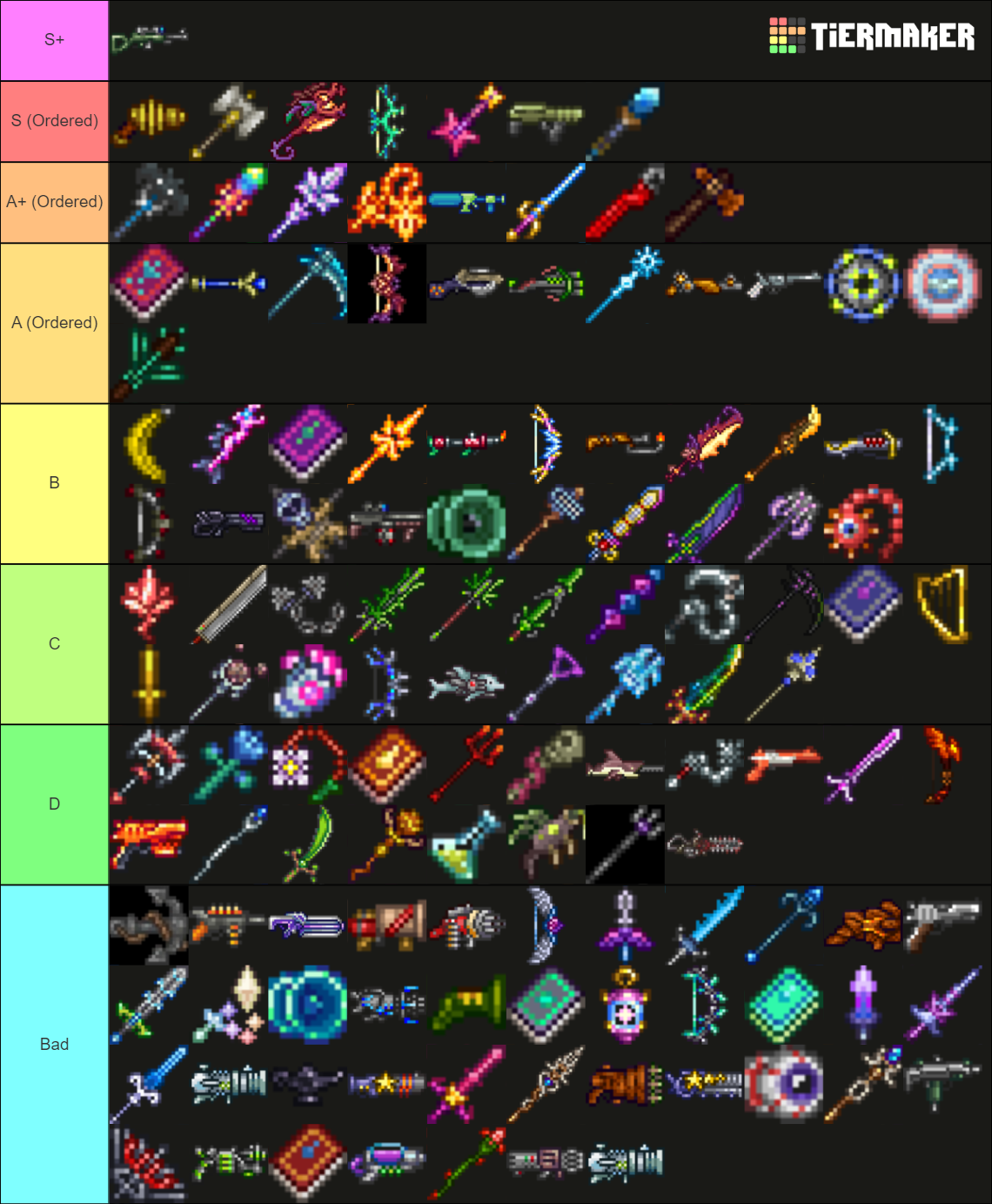 It’s important to note that only the tiers above A are ordered, the lower tiers are grouped rather than ranked.

This tier is pretty self-explanatory. It contains weapons that are either too niche, heavily outclassed by a better option, are too gimmicky, or have bad stats.

Magnet Sphere, Razorblade Typhoon and Nightglow are a few weapons that are too niche, Influx Waver, the Yo-Yo’s, and Kaleidoscope are weapons that are heavily outclasses, Phantasm, Flying Knife and Shadowflame Knife are too gimmicky, and Rocket Launcher, Vampire Knives, Celebration Mk. 2 and Leaf Blower simply have bad stats. Bad stats does include projectile speed, which is why the slow, single-hit projectile weapons are here.

This tier includes weapons that are still bad, but still have some sort of use. Outclassed weapons that can still stand on their own belong in this tier. Not many gimmicky weapons are in here, except for Toxikarp, Life Drain and Seedler.

Toxic Flask, Orichalcum Sword, Butcher’s Chainsaw and Flower Pow are all weapons that are extremely hard to hit opponents with, but they aren’t bad enough for the Bad tier because they made up for it with insane damage.

C Tier is where we go from “bad but usable weapons” to “viable sidegrades”. Most weapons here are not outclassed outright, and some of them can be mainstays in loadouts.

Some of the best weapons in this tier in my opinion are Nebula Blaze, Pulse Bow, Death Sickle, Mushroom Spear and Staff Of The Frost Hydra. These weapons can be used to fill roles that other weapons can’t, but they aren’t the most reliable.

As for the rest of the C Tiers, they fit under the category of “unique but somewhat unreliable.” Especially so for Blood Thorn, all three Chlorophyte weapons, Crystal Vile Shard and Meteor Staff. Again, these weapons can be used effectively in certain scenarios, but they aren’t the most reliable.

B Tier can also be considered the Sidegrade Tier. A lot of these weapons have unique properties, just like the C Tier, but they are more reliable and perform better overall.

The best weapons in this tier are True Night’s Edge, Venom Staff, Eventide, Hallowed Repeater, and Tactical Shotgun. No weapon here is the best of their archetype, that’s what the A+ and S tiers are for, but all of these weapons have merit, and a good amount of it.

You could very well get away with spamming any of these weapons (Except maybe Flying Dragon) and you could perform decently well.

This is the first tier in which I started ordering weapons. In this tier, they started getting good enough to warrant being ordered.

None of these weapons are outclassed, all of these weapons have good stats, and most importantly, they’re all starting to become more reliable, which is the defining aspect of a top tier weapon.

Razorpine sits at the bottom of this tier only because of its somewhat lackluster damage.

Revolver and S.U.S. Shield are in a similar boat, in that they don’t have as much range as their top tier counterparts, but they make up for it with the Revolver’s faster firing speed and the S.U.S. Shield’s higher velocity.

Clockwork Assault Rifle and Stake Launcher are the two best ranger mid-range weapons, so their high placement is deserved, but they still lose out to the better mid-ranges ever so slightly.

A+ Tier is where we start getting into the realm of privileged weapons, weapons that can do what no other can. Some of the best weapons of their archetype are here, and yes, half of the tier is all magic weapons.

Possessed Hatchet is probably the biggest exception to what i mentioned, as it’s just super reliable for what it does.

If Possessed Hatchet is the least privileged weapon in this tier, then Starlight is the most privileged. It’s easily the best point-blank weapon, it’s stupidly spammable and hard to contest DPS-wise.

Combat Wrench is the best melee poke, not just because it’s fast, high damage and high range, but because it can be swapped to and from really fast compared to other pokes and it can save your skin with its somewhat slow, lingering returning projectile.

Bubble Gun has ridiculous damage. Imagine Toxic Flask, but the clouds can linger in the air. Toxic Flask does have slightly more damage, but not too much more compared to the best anti-rush.

Bat Scepter being at the top of A+ is probably the hottest take of this list. The reason I think it’s so good is because of the insane area coverage. I love using this thing as a countermeasure to Tsunami when it’s used from full screen. The damage is respectable, too.

Basically, what i said about what type of weapons are in A+ Tier, but cranked up to ten. Some of the most privileged, reliable and outright best weapons in the game belong here.

Magic Missile is a borderline wall piercing Paladin’s Hammer. The reason it’s better than Rainbow Rod is because of its spammability.

Laser Rifle is an incredibly consistent mid-range, again, comparable to Paladin’s Hammer. It is the go-to midrange if you don’t like aiming hard with Heat Ray.

Tsunami works its way into the S tier through sheer brute force. It has absurd stats. High velocity, High damage, High firing speed, and decent area coverage is all it needed to be a meta-defining staple.

Betsy’s Wrath is a decent, A+ area coverage weapon on paper. What makes it an S tier is the fact that it double hits a lot, giving it crazy good damage.

There’s a reason I compared two S tier weapons to the Paladin’s Hammer. It has been and still is a meta-defining staple. It doesn’t have absurd stats like Tsunami or insane privilege like Stellar Tune, it’s just insanely reliable, the most reliable close-range weapon in the game. It should be the go-to whenever you’re near your opponent. This weapon is so meta-defining that it warrants wearing a melee-stat boosting glove and having at least one armor piece that gives melee speed.

If there were a theoretical 20XX for DG PvP, it would entirely center around Heat Ray. It’s a fast firing hitscan weapon with decent DPS, which is a privilege that no other weapon has. The reason this is an S tier while guns like S.D.M.G. and Megashark are stuck in the lower tiers is because of player iframes. S.D.M.G fires fast, but some of its bullets get eaten up by iframes. Heat Ray fires just fast enough to hit just as iframes end, meaning every shot hits.

If you somehow haven’t noticed, I put Sniper Rifle in its own tier. This isn’t because of its stats, though. With its stats alone, it’s mid-S-Tier at most. It has hitscan, and good damage, but that’s not enough to deserve its own tier. The reason the Sniper gets its own tier is because of the scope. The scope not only boosts the range of the weapon, making it an even better poke and easily the best poke, but it provides an incredibly vital boost in the range of your view. There is no reason you shouldn’t be using this weapon, as not utilizing the increased vision range will put you at an active disadvantage.

Scope accessories are the only other thing that provides increased vision range, but that takes up a valuable accessory slot, besides, scopes are only necessary on poke weapons. The fact that a weapon can do what an accessory can kind of makes the accessory somewhat redundant.

I said in my How to make a good loadout guide that you should “make your loadout with weapons that fill every archetype.” I’m retroactively rewriting that to include “and Sniper Rifle” in it. It’s that good. I wasn’t making any bold exaggerations when I put Sniper Rifle in its own tier. It deserves its own tier because of its valuable, vital utility.

Again, this tier list has subjective opinions. If I trashed on your favorite weapon, feel free to explain why I’m wrong (in a respectful, civil manner please). I did try to explain the reasoning behind why I think certain weapons fall under a certain tier the best I could.

If you want to make your own DG PvP Weapon tier list, here is a link:
https://tiermaker.com/create/darkgaming-pvp-weapons-1143136

And feel free to post your own tier lists in the comments.

Mobile users with controllers cannot use the extended view of the sniper rifle and instead have to touch the screen or use binoculars to be able to look which can get finicky at times.

i found out that bananas are the best low damage weapon ever (45 on average, but high ut)

bananarangs are actually godly in pvp despite the low damage stats because the speed is so good that its both a defensive tool and goes near poke range at the same time. further more, the usetime is insanely high for a weapon

Where is the keybrand? Seriously it’s like a really good weapon.

its beaten by the breaker blade and chloro sword

Breaker blade I understand, but how does clorophite sword surpass it?

(than the breaker blade spoon)

Honestly enemy I could not agree more with this tier list. In my (and most ppls opinion) this is a very honest decision. Also sniper s+++

keybrand has less range than breaker blade and claymore too

Oh hell nah. chloro does outclass the keybrand via its projectile, which can be shot through walls. Not everyone uses melees for rushes.

Claymore’s projectile doesn’t go through walls, that’s Chlorophyte Saber
Even then Saber is better
although it has less base damage, the projectile has 110% base damage (80 → 88 base damage)

Honesy can’t improve this at all, spot on.