Welcome to the Zombies Ability Tier List thread. In this thread, you’re encouraged to share your thoughts and opinions on the various abilities of DG’s Zombies game mode and what tier they should fall under. 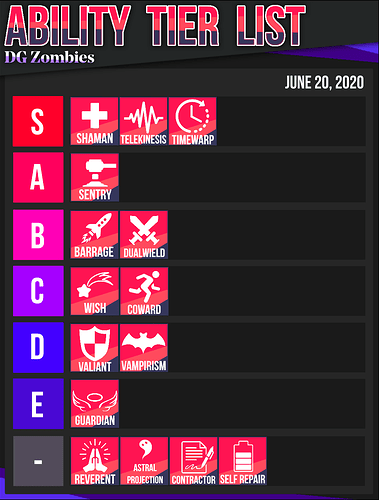 Shaman- Even after the nerfs, Shaman is still an amazing support ability. Being able to regenerate and increase the maximum HP of players makes progression a lot smoother. It is also good at all stages of the game, especially late game.

Post-nerf, Shaman users are more vulnerable to death since they don’t get healed by other Shaman users.

Telekinesis- This ability scales very well late game. It allows you to move mobs away or towards you which is very useful. The mobility it grants is amazing in open and vertical maps.

Timewarp- This ability can be used to heal back damage or lure zombies in a specific location at a very low cooldown. You can also stop time and buy time for yourself and allies to relocate. The overall utility of this ability is amazing.

Sentry- While it can fall off late game, Sentry is still a great ability that can provide offense, defense, or utility.

I am not including Double Banking in this evaluation as it is an exploit.

Barrage- Starts off weak, but as the game progresses it gets powerful enough to clear waves of mobs with ease. However, using it can also lose you some farm so it’s not recommended to depend on it too much.

Wish- While this ability is random, the wish favors your current situation, which can be quite useful. However, some negative outcomes just outweigh the good outcomes which can be annoying sometimes.

Coward- This ability helps you get out at dangerous situations, and clears nearby mobs at spawn. However, this ability scales terribly as the cooldown also increases every time it is upgraded.

Valiant- This ability requires you to be close to mobs and be facing them to get various buffs. However, getting hit by mobs will give you debuffs. Some of these are debuffs that may potentially ruin your game.

Vampirism- This ability is very DPS reliant, and each level up adds a life-draining debuff. A challenging ability to use which can only work in certain maps.

Guardian- This ability can only be activated starting from round 4, which increases item prices early on for no reason at all. Scales terribly late game as Guardians dies way too quickly.

Feel free to suggest any changes to the tier list. As long as you expand on your opinion as to why ‘ability X should be in this tier’, I will take your suggestion into account.