As part of the next trading system update, the trash slot is being removed (suggestion) and instead each item will have a new delete option: And you even get an extra confirmation: 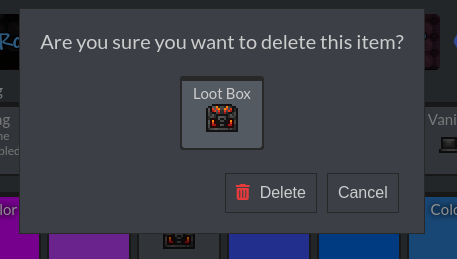 I expect the Sell option will be more interesting than just deleting an item. There will be two ways to sell I expect:

I’ve replaced XP Efficiency with XP Boost and DP Boost. Instead of refilling an efficiency bar, you can buy an xp/dp boost from the shop (or from other players) that will temporarily boost your XP/DP gain to a set amount for a limited time.

When you have 0% boost, the bar will not show.

Items the shop sells will be changed to a specific set of items usually not obtainable from loot boxes. 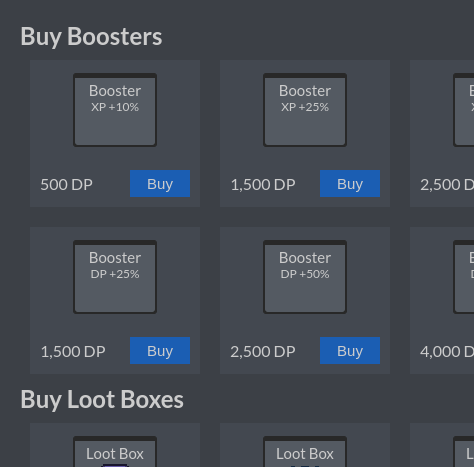 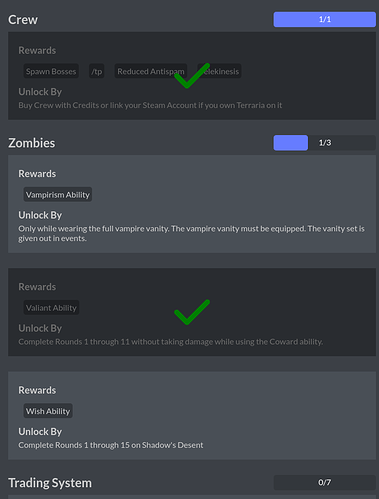 If anyone has thoughts on anything already shown or anything new, now is still a good time to put forward your thoughts or ideas before some features get finalised.

Item durability will be DP driven only. From what I remember nothing will consume items anymore.

A few items are marked as untradable and unsellable, so deleting them is the only way to get rid of them (mostly reserved for items intended for a specific user only), others (like the Loot Box in the image) will be unsellable to the system, but you can sell them on the market, so it’s a matter of waiting for a trade/sale to go through or deleting it to make space.

At some point, when there is a semblance of a system, some people can join me in a closed test. Based on the current trajectory it is possible that we will be looking at incompatibility with the current live system, depending on testing and likely a poll, I will either cut some features from the new system (some of which I have shown) and thus keep it close to the functionality of the current system, or break away with new features and require starting again.

this also would’ve look sick if there were some advancements cuz rn zombies boring. Nothing fun to do, except those 3

0% boost would be equal to having 100% efficiency atm. But since lower than 100% efficiency is now impossible, it makes more sense to have the newer numbers work differently which is why it’s now called a boost and applies extra on top of normal. But it’s not stackable, i.e. a 50% DP Boost is applied and lasts x many hours, and during that time you cannot apply another.

And unlike before you can trade or sell boosts because they’re items.

DP Drain from XP is no more. I think it means DP will be easier to store. (Also how is @Eltralor level 650 while I am only at 70?)

I guess I vote every day, it gets me one level, and I farmed a lot in zombies before with a few pals (which made it easier and was very motivated cus i had nothing else to do) for dp and exp but I was never the chatty kind till now M am taking a break from leveling up because of school (also i like french fries)

Halellujiah, my dp will finally be safe from the gnawing jaws of dp drain