[3] Did this affect anyone (e.g. they were using their hacks in PvP)?
The community at large, via minimodding and using reports to ruin other players experiences by reporting small jokes, and even moderators who are laggy. 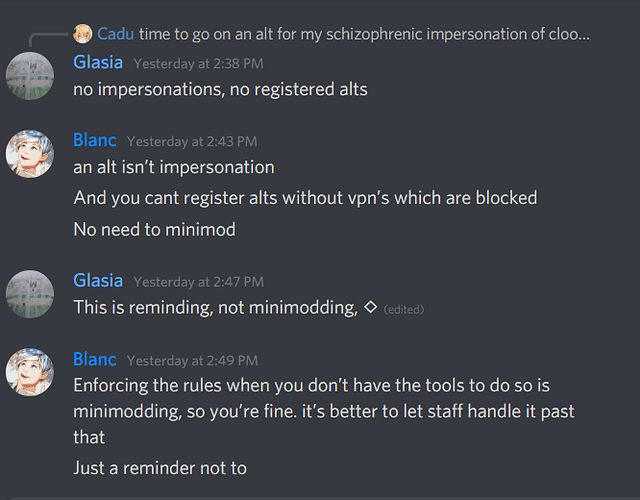 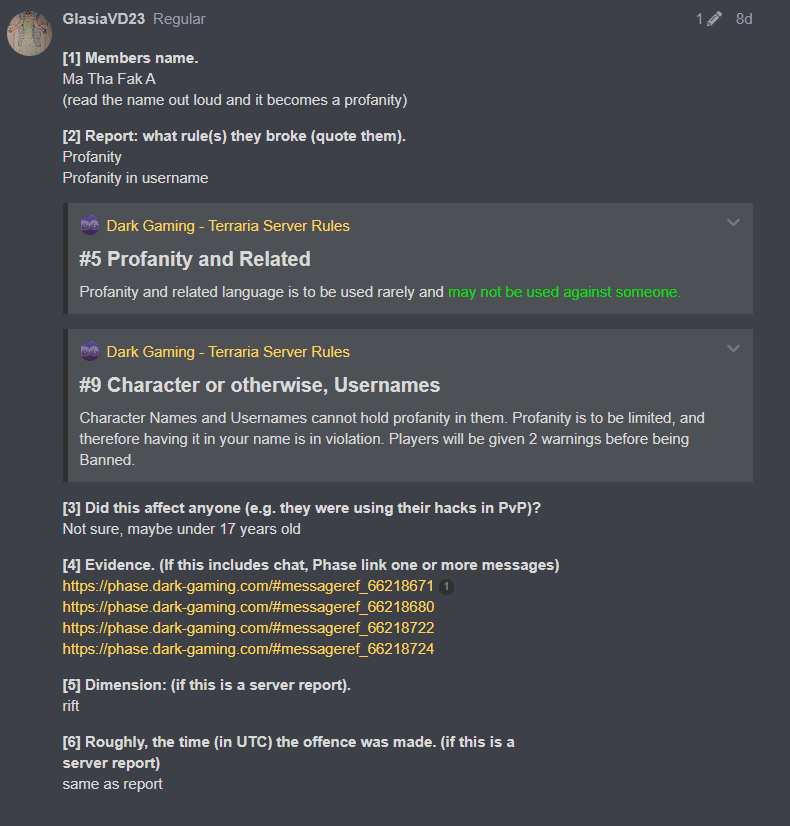 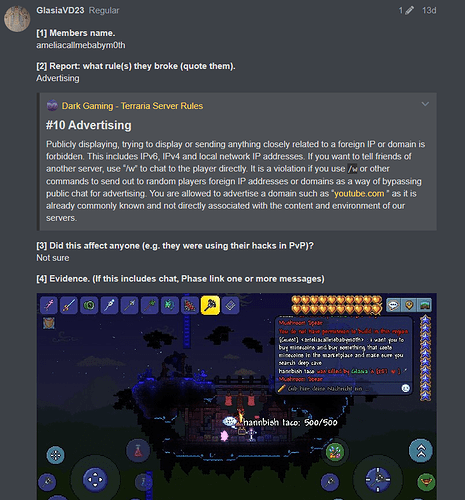 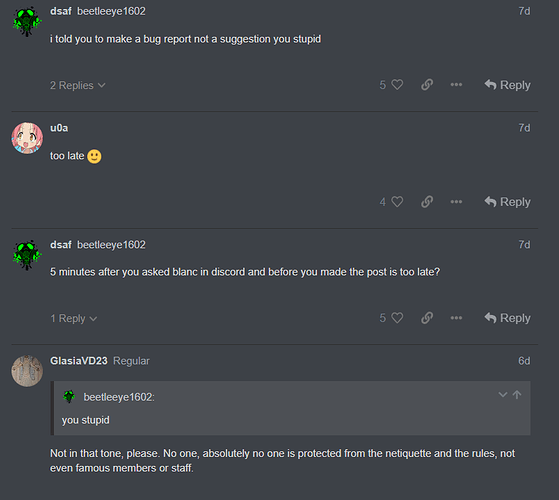 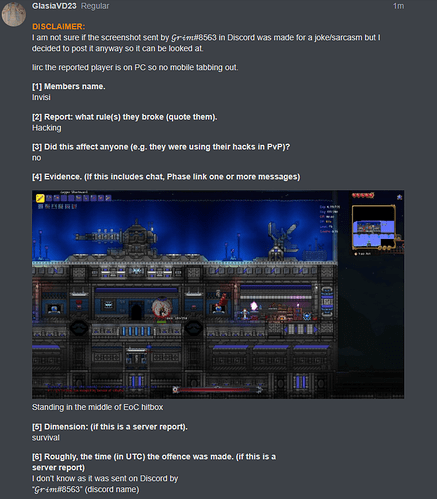 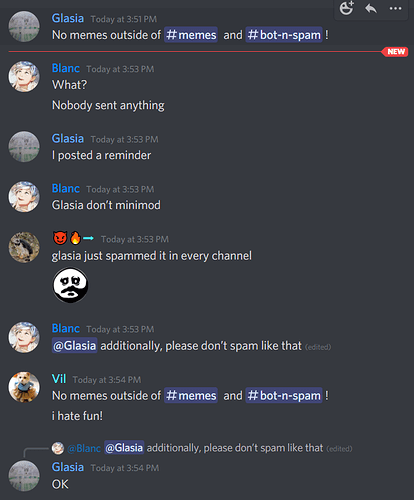 [5] Dimension: (if this is a server report).
None applicable, however the evidence occurs on the DG Forum and DG discord.

[6] Roughly, the time (in UTC) the offence was made. (if this is a
server report)
Varies.

Note: I largely think Glasia’s reports are good, and well intentioned. However, the degree to which they choose to report and constantly remind users to follow rules ends up derailing many conversations. Additionally, this makes users feel as though they must walk on eggshells around them, and that even making sarcastic remarks may get them or another user banned (See Glasia’s withdrawn report on invisi). I think this behaviour creates a toxic server environment where people don’t wish to post for fear of being reported. Futhermore let me explain the screenshots I posted in order from top to bottom

Screencap #1: Glasia minimods when Cadu (Lewd) jokingly says they will go on the server with an alternate character (not account, this was not mentioned). This is an example of minimodding and harassing a user for making an innocent joke.

Screencap #2: Here Glasia reminds Legolas (a mod) about not griefing when they had shown a video of a “car” briefly deleting some tiles on a tree. This video was a joke, and Glasia did not have enough information to even conclude that it was Legolas griefing to begin with. This is kind of reminding presumes guilt even without proper evidence and seems to exist only to incorrectly attempt to strictly adhere to rules that may not apply. This is toxic and makes users feel uncomfortable.

Screencap #3: Here Glasia erroneously reports Ma Tha Fak A, I understand that his name may sound like a profane word, reporting names for merely sounding naughty sets a dangerous precedent that any name that vaguely sounds inappropriate will be punished. I don’t think I need to mention how this might be abused and how it may become toxic.

Screencap #4: Here Glasia incorrectly reports Amelia for simply talking about something they enjoy. Once again, in an attempt to have users strictly adhere to rules he has incorrectly used them to file a report. This type of behaviour breeds a toxic environment where users feel uncomfortable to say anything, nor talk about things they enjoy.

Screencap #5: Here Glasia flags beetle for jokingly calling u0a stupid. It derails the conversation, and while it may be technically true, u0a didn’t seem to care and if no one was hurt by beetle’s comment, then I hardly see why his post needed to be flag. The intention of the rules is to protect a user’s experience on the server, and if no one’s experience was being ruined in this conversation I don’t see the need for Glasia here to interject and derail the conversation.

Screencap #6: I should clarify that Glasia has withdrawn this report, however the fact that they’d report a moderator for lagging, before asking any more questions about the event leads me to believe that they care more about making a report than actually finding out if any hacking is occuring. Once again I will re-iterate that behaviour like this is reckless and likely hurts more people than it helps. However I doubt that this report was ever intended to help anyone to begin with.

Screen cap #7: Glasia Spams in multiple channels in the discord and minimods, once again attempting to breed a toxic environment where users cant harmlessly joke around. I should note, when he sent this no one had even posted a meme in pvp-general (among other channels), meaning that he sent this post just for the sake of reminding people which is unnecessary and generates spam. Furthermore, blanc even warns them in this screenshot because they had spammed this comment amongst multiple channels for little to no reason. (I say its unnecessary because the rules of the DG discord are very clearly stated at the top)

Last thing, I don’t want to say that reporting is bad, but clearly enough of these reports and actions taken by the user Glasia breed more negativity and toxicity than they solve. The reports and minimodding they enact is done so frequently that many improper reports and actions slip through and end up harming the experience of users. Reporting and reminding users ought to have a good reason attached and ought to have plenty of thought put into them because each report requires staff time and resources. Improper reports/minimodding steal staff time away, and breed toxic environments for users. Once again I will re-iterate for clarity’s sake that reporting is good, but in moderation, with maturity, and good consideration for the rules and their intentions. Apologies if this violates the format but I felt as though giving context to the evidence and explaining how it broke this rule made sense.

needed to be said

i agree with you on this, kish, this is something that needed to be said big time.

You’re such a brave legend, really, you just said that one collective thinking that we couldn’t express nor say because of the fear, thanks, we all appreciate it.

I agree with this. Minimodding isn’t generally mentioned in a lot of communities’ rules since it’s such an edge-case scenario. However. I do believe it sparks toxic relations and a negative aura around a person.

I am unsure if their actions are of positive motive, however I’d like to believe so. Agreeing with what blanc mentioned, simple reminders to avoid breaking rules are alright. Though I don’t agree with the tone of their reminders. imo, it gives off a very condescending tone.

When stumbling upon non-live evidence(i.e. photos, videos), I find it odd they immediately report, without not verifying origin, context, or validity. I felt like 2 Invisi cases could’ve been avoided in that situation.

I understand that now, I will only report from now on what I see myself on the server and on phase. If unclear I will ask in the chat before thinking about reporting.

I will ask from now on if I see something like that questions like “Are they lagging/tabbed out mobile?” etc.