During the wait for custom zombies waves, I’d like to see this simple change be made in order to allow a more balanced zombies experience.
Currently, many maps are bordering on impossible to get past round 11/12/15 due to things often out of the players control.
This namely encompasses maps with poor balancing decisions and maps with very small designs that prevent general movement or cover-based strategies, but even a number of the maps that do allow you to pass these difficulty spike rounds will often immediately fall apart on round 16, 18, or 19, almost exclusively due to diabolists.

There’s nothing innately wrong with difficulty spikes like this, as round 20, 21, and 22 are also all incredibly difficult and require planning far ahead in order to deal with these rounds properly.
My problem comes from how the difficulty in the first set of rounds is presented.

I honestly believe Round 10 and 11 are some of the more balanced rounds, difficulty spikes for sure that see the end of most smaller maps, but typically are considered fair and manageable with good mob prioritization and ample farming.
Round 12 is the first issue, Sand Elementals.
Yes, not Captains, but the Sand Elementals. While not inherently unfair in any way comparable to the amount of deaths created by Captains, Sand Elementals shut down 90% of ability to play around the other mobs by forcing you to sit completely still, if not within a 3 ~ 5 block radius that’s largely rng dependant on if you have any vertical height to utilize.
If you see them coming you can position properly ahead of the round, but this still forces you into whatever strategy you first select with no variation, movement, or other positioning to take advantage of and I generally believe this is not fun in any capacity. While captains force you to take cover or keep constant pressure on them, sand elementals do not care.
With captains, on some maps, you can have enough mobility to get around them and kite them efficiently, or abuse cover, but sand elementals do not possess any of these inherent flaws.
Their gameplay is simply not fun regardless of how fair they are or are not.

My solution to the first problem:

For those of you who don’t recognize this mob, here’s a short video I created showing what this mob does and how it behaves. 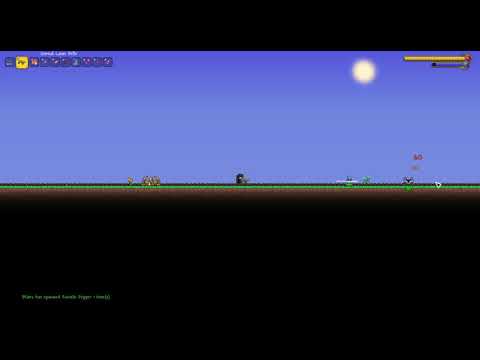 Twinkle Poppers walk slowly towards the player until they’re within a modest distance.
They will then start spawning Twinkles, small mobs that will run towards the player quickly and explode dealing a large amount of damage.
Their explosion hitbox is small but has a great deal of height making it nearly impossible to jump over them, but their hp is very low.
Like gladiators and snipers, they won’t attack when being hit, and unlike sand elementals they cannot hit through blocks, nor do they wall off entire sections of maps as the twinkle explosion will not pass through blocks either.
In order to prevent infinite farming, Twinkles should not be able to give points to the player.

The problem at hand here is even more obvious than Sand Elementals,
Diabolists projectile is invisible due to particle limitations within Terraria, and this creates scenarios where the player is often one-shot from completely invisible projectiles and thus are often impossible to dodge as the diabolist will shoot at the player from off-screen.
You either need to turtle outside of their range, or kill them instantly on spawn, and not all maps support one or even either of those options.
I think Demons are an adequate replacement.
They move towards the player which solves the first issue, they can be modified to do VERY high damage, like Diabolists, they’ll shoot at you from an infinite distance but their projectiles will not go through walls nor are they affected by the particle limitations, thus force a more proper method of mob prioritization while offering a proper ability to counterplay against them by avoiding projectiles through movement and similar.

Everything about Diabolists is mirrored to a lesser extent with Necromancers, invisible projectiles, mobs that don’t move from spawn points, etc. the only difference being their projectiles have a much more limited range and don’t wall-pierce.
I still think they force certain maps into obscurity late-game, thus I’d replace them with Red Devils to follow the theme with Demons, for similar reasons but with a projectile that should in theory be easier to manage.
Perhaps spawning Red Devils in place of Diabolists, with a few demons added into the mix is a better idea?

All in all, I think these 3 simple changes would DRASTICALLY improve the number of maps capable of reaching late-game rounds, but not in a way that simply makes zombies easier.
If you disagree and think that the current mobs are fine, first of all I don’t trust you because they clearly aren’t if you literally can’t see their projectiles, but secondly, what mobs do you think would serve better in the place of these mobs?
My goal with this suggestion is simple: Allow more maps a chance to get into lategame without making zombies feel significantly easier, and to allow other maps a bit more freedom of gameplay within late-game rounds rather than the only viable strategy being to constantly turtle away from diabolist range, or spawn kill instantaneously.
These changes should in theory be simple to make with less than a half hour of work put into it, it will just take a small amount of modification to make these mobs balanced within their rounds, which can be playtested by any of the current staff (as most of us actively play zombies) and then simply given info to Tejd/Durtle to push.

if im correct, red devils look and are stronger, so wouldnt red devils be better for diabolists?

This is originally what I had planned to suggest, but after thinking about how their projectiles work I think Demons would be harder to manage properly.
Given proper health and damage scaling to Demons, this should be easy enough to balance, although I don’t remember if Zombies has proper control over damage or not. If not, yes, reversing would be a better idea

I agree on these suggestions mainly because i’ve been playing zombies and i’ll have to say, rounds where diabolists spawn are almost impossible to complete on some maps no matter how well equiped you are, making it feel like the difficulty just becomes unfair and that such an enemy is really out of place, given how projectiles would not even show up as already stated, them spawning off-screen and staying there spamming towards players, ruining the progression and the fun of killing enemies on zombies since on some cases that is not even an option.

Sand Elemental is not that big of a deal but it’s still annoying how they literally force you to just stay hidden on those rounds with their projectiles.

Any changes would make getting stuff feel more rewarding even if the round is really hard as right now they are plain unfair and unfun to deal with.

Yeah, or maybe they could just be made to be a lot rarer

I think, Sand elemental should be Rd. 12 boss and agree to the twinkle poppers giving no +XXXX because the sand tornadoes can lag mobile players.
Also the weakness of the demons can be counteracted with every diabolist being replaced with three demons. Necromancer can be the Rd. 18 boss.
Additionally I think, red devils should give +2000 on kill because their trident projectile does much more damage than contact. Diabolist can be Rd. 19 boss.

There are actually a few things even further that I wanted to change, in particular, some of the rounds past 10 feel too similar. The suggested changes, in particular, are big changes and would fundamentally change maps and the viability of certain strategies (buffs some that are not viable I imagine). A wide array of maps (especially high economy multiplier maps) need to be tested to ensure they will not require rebalancing.

I think anything like this would be tested and iterated on in Zombies Staging only, until it’s clear that the changes are an improvement.

Diabolists: No. Just no. Take them out or take Zombies out.

Necromancers: Honestly, not much of a problem. I’ve never had any difficulties with them at all.

The only map I’ve seen that has any balance even remotely with Diabolists is Cryptic Castle. Necromancers can be a bit troublesome on tighter maps, but they aren’t tough to deal with by any definition. Sandstorm Elementals are nuisances on all maps (with a few exceptions in the case of vertically challenged ones where the sandstorms can’t spawn).

Sand Elementals are almost always the most annoying mob, because their sandstorms do way too much damage. It would be fine if there were only one, maybe as the boss, but with a possibility of 10+ spawning on some maps, you literally cannot leave an anti-sandstorm location without dying to a sandstorm.

With Diabolists, I have never seen them be any fun. The reason why is roughly the same as sand elementals being broken: They cause massive amounts of long lasting AOE damage. That, combined with the fact that they teleport when hit, and their attacks can just go through walls? It is so unfair that I am pretty certain that the rounds without them are actually easier to get through. Plus, I don’t find Diabolists to be a fun enemy even in an average survival play-through, when there is only 1 or maybe 2 at a time. 10+ is just overkill.

Necromancers are perfect though: They don’t do too much damage, their attacks don’t travel through walls, and I don’t think I’ve ever seen one teleport during a zombies match.

I’ve never seen a Diabolist teleport on Zombies either, to be honest, but I agree- Diabolists aren’t very fun, even on singleplayer.

also for sand elementals, most people just dont fight them untill the end of the round, and killing them is boring,

Yeah, or maybe they could just be made to be a lot rarer

i mainly agree with elric- make sandstorm elementals a boss, because it makes the most sense. I feel like Lihzahrd is too easy to deal with anyway- maybe replace it…?

I mean, I’ve lost many a game to that lizhard. nobody expects the super fast stage to mow through everyone.

nobody expects the super fast stage to mow through everyone.

See, if you could move the Lihzahrd yourself without Telekinesis, I think it’d be fine. But instead… well, it has 100% knockback resistance. Good luck with that on smaller maps with lower tier armor.

Lihzahrd (yep, that’s how you spell it fsr) is a good boss for some, I have always destroyed it in a couple seconds without any issues, but that might just be me

I’d say it depends on the map.
I’ve killed it in seconds on some maps, but on others, it took ages.
Its immunity to knock-back allows it to, as I said earlier, mow through unprepared players. I’ve had it plow through me, even when prepared, because I would be backed into a corner and unable to move fast enough to dodge it.