What happened to them?

Screenshot_20220728-195805720×1640 185 KB
The following screen shot shows a user name: Harmfulcrane. She/He said that he/she banned Aurko also he had a shield badge which most mods have. But when I clicked on his/her profile it said that he/she is a member (leavel 2) and not a leader/moderator (level 4). What happened to him/her. Is he/she just not on the forun anymore?
I also noticed that in that same ban appeal

but she/he is also a member. Usually other mods assigins other mods to take care of an appeal.
So what happened to both of them. I need answers

The leader badge is assigned separatly, so he just doesn’t has it, unlike the shield, that may be for being in the “moderators” or “staff” group, but indeed is a moderator
likely the cause is that he is a pretty old member, and the forum used to be other site, so in the migrating or other things, it may be just forgotten by accident.

About quinci, he moved along, just not active here anymore, and same reason as above, very old member here,so no leader aswell for some mistake maybe.

Do you know what happened to these guys? Question: Was Nemesis really the “PvP God”? (I saw it on a Title in dtp). How good was he?

About Lord avery he left some months ago,Was a Admin alongside Rofle,and a moderator in the oficial terraria discord, Good at PvP.

Marcus101RR Appears like 1 time every month lol, Sometimes in game, sometimes in discord (is said that if you find him active, you will get good luck for 1 week), but likely he is mostly inactive,he was a developer too

Dunkasaur Moved along as well from terraria, I think he was one developer when the server was starting, He was aswell a moderator ,but in r/terraria (Not sure if he is still there)
He was active in the terraria forums aswell.

About N3m3sis dont know much, But yeah, he was a pvper at the timeframe of 1.3 i think., Likely Blanc (mr. Sandwich) Or Solar deity can tell you something, or just any other old pvper.
(However, they are quite inactive in the forums, so dont count on them lol)

About the other people dont know at all, just that they are from the very early darkgaming, maybe from 2012~<2016

Is he/she just not on the forun anymore?

also, i just want to tell you - instead of writiing he/she all the time, just use they

writiing he/she all the time, just use they

I don’t write I type

. They means more then one user. She or he refers to 1 male/female

im pretty sure you can also use they/them when the g.ender is ambiguous

Thank you. That was some valuable information. I really love to read more about DG moderators and server histories.

In a nutshell yes.

Mr.sandwich used to be a developer as well, he just quit coding (however, he is no longer active,so theorically he doesn’t counts now?,anyway…).

Also i see that you like the meme and weird DG lore, so this is a iceberg i made some time ago with meme purposes lol
iirc, all the entries there means something, so all are true and not just an argument that “May be true or false”, however some are memes lol. 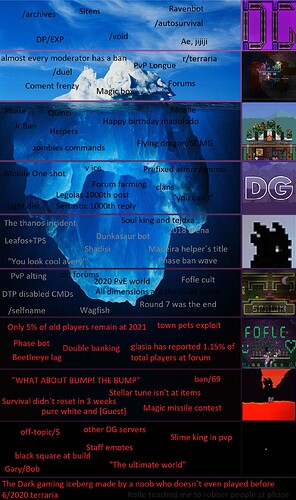 (Also unrelated, but someone said that was a good idea to mmake everyone a collaborative iceberg of DG at the end of the year lol, so if that happens, maybe is interesting for you)

Thats awesome! Neverbeen is really a chad for sticking with DG. I also like the Iceberg you made. It was very interesting. Thanks for the info!

Where am I in that Iceberg

It was made prior to that drama.