Disclaimer: To those with permissions to move posts between categories, please leave this post in the off topic category. I wanted to make something a bit light - hearted for April Fools’ Day while still having it be at least vaguely related to the Dark Gaming Forums so it wouldn’t feel too out of place. The topic I discuss here was previously an issue but it has already been resolved, most notably with the DTP screenshot, that is an old screenshot I used for the purpose of this joke. This is not an actual ban appeal, please do not take this seriously. To any staff members: if this isn’t allowed, please take this post down and let me know. Thank you for reading this disclaimer.

I didn’t receive a ban link when I attempted to connect to the server. Instead, all I received was this message: 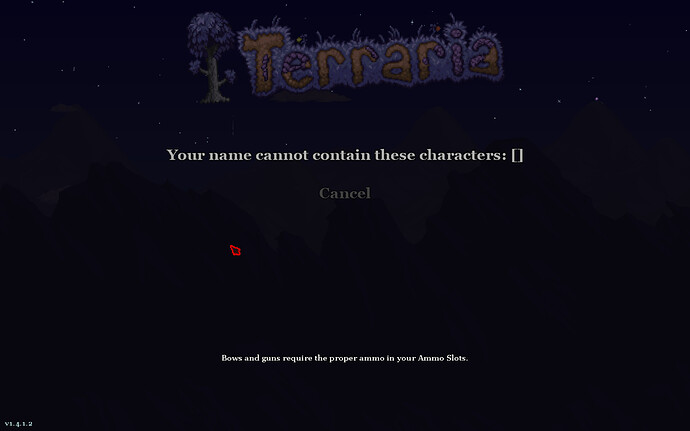 I had only learned about the rule implementation regarding brackets in player names after I was banned, learned thanks to Tejdxa/Neverbeen via the Dark Gaming Discord server, so I’m going to say that no, I did not break the rules knowingly.

I do not believe that my ban was fair, as the day prior to my ban, I was able to play on the server just fine, and then the next day, the new rule regarding brackets in character names started being enforced without warning as far as I was aware, not on the Dark Gaming Discord nor here on the Dark Gaming Forums. As I stated above, I only found out about the brackets rule through Tejdxa/Neverbeen via the Dark Gaming Discord after I had been banned, too late to be able to put to use. That, and my account name still shows on the DTP website as [AK] Gunslinger.

I was banned due to a rule change which directly ended up affecting my character, and by extension, my account. Outside of at least one warning for profanity directed at another player(s?) a few years back (as SolarDeity may recall, or anyone from any of the times I spoke about it here on the Forums and/or the Dark Gaming Discord), I haven’t intentionally broken any rules on the server. I haven’t been as active on the server nowadays, but nevertheless I’d been able to curb my temper and I haven’t lashed out at anyone on the Terraria server, instead trying to help out other players when I could, interacting with others at higher levels of play in various ways, reporting rulebreakers (or players I suspect of being rulebreakers) and hoping that other, better players on the server could fill in the gaps I have, be it in terms of providing aid to other players on the server or in terms of skills in cooperative activities such as PvE, Zombies, and the one time I played it, Survival. My knowledge on the server only stretches so far, and I hope to continue expanding it so I can continue helping out in this server’s community.

I know this is a joke, but I don’t really get it lol

Yeah I know, but I don’t understand what the joke is about lol

Lol I’m just going to play along with this

You have been auto banned by the system. How would I know if you broke this rule on purpose and when I unban you, you will just repeat your offense?

How would I know if you broke this rule on purpose

My account name (registered) *is “[AK] Gunslinger”, and as a player, I am only allowed to have 1 account. The rule was put into place long after I had made my account, so I didn’t break the rule on purpose; if anything, the rule broke me.

and when I unban you, you will just repeat your offense?

Would I just be condemned to play on an alt forever??

Would I just be condemned to play on an alt forever??

Your account name will be changed if you get unbanned

Alright then, in that regard…

and when I unban you, you will just repeat your offense?

I will not, because multiple accounts exist.

If you don’t know exactly which rules you broke, you can tell me and i will make it clear

Attempting to, using the name of or otherwise impersonating another person is forbidden. If you impersonate you will be banned.

Here is the rule I broke

Do you understand why what you did broke the rules and do you now understand how not to break them again?

Yes, I do. If you were responding to me.

I think this is when the joke starts to break down

That gives me a question…
Every time that Popstarfreas ask this, its written exactly the same as others, so… He just copy and paste it? Or he has memorized exactly this quote?

I got beaned too and please unban me but I’m lazy to make an appeal because I’ll say it here since I’ll get more attention and do nothing productive in my life whatsoever.

(This is also a joke)

I got beaned too and please unban me but I’m lazy to make an appeal because I’ll say it here since I’ll get more attention and do nothing productive in my life whatsoever.

unbeaned
(this is also a joke)

* The [ and ] are now not allowed in character names. Anyone who registered using these can likely be migrated to a new account.

How is this possible??