Dimensions or Services it affects
Zombies, specifically the wish ability.

How often it happens
This is the first time we all used wish in a lobby together, so only this once. I imagine this could be reproduced quite easily though.

Any screenshots or videos showing the bug
Player Coochieman was the only one being targeted by the “I wish… Player would die” effect in zombies. The entire lobby was using the ability wish, and yet every time without fail Coochieman would be selected to die. I have provided many instances where this occurred, though it happened much more than just what appears in the evidence provided. They literally could not play, because they were constantly being killed by this effect. I am not sure if the ability wish was intended to be used by multiple people in the same lobby, I just know that this effect that I’d imagine was supposed to be randomized, seemingly was not.

as well, that is not intended, as stated here

Requires at least one other person to be in the lobby. Dependent on whether you are the leader in total score gained. The target is simply a random player

This says it is supposed to be random:

Requires at least one other person to be in the lobby. Dependent on whether you are the leader in total score gained. The target is simply a random player.
[Weight: When not leader, 10. Otherwise, 2]

Yeah, that’s, uh… well, actually there is a pattern to it, a very bad pattern but a pattern nonetheless. Searching “Wish kill” in the Dark Gaming Discord shows this as the earliest (and only one of two times this bug came up there) mention of it:

More recently, there was a mention of it in the staff chat one year later, literally. Or not, depending on timezones. 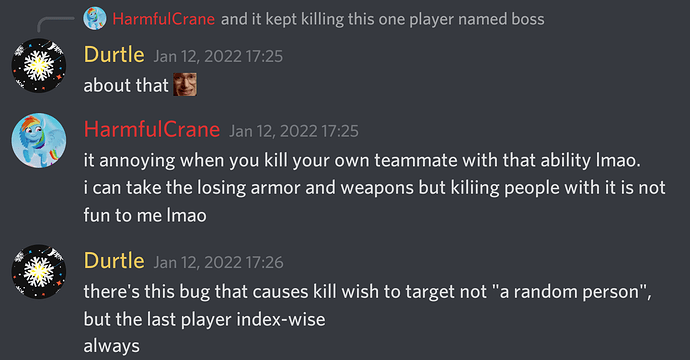 Is that not fixable though? I get this is obviously extremely low priority and I’d honestly rather devote time spent elsewhere, but just knowing whether this is fixable or not would be sufficient for me.

You have to admit it was funny.

It was lmao but it probably got old for them.

He couldn’t get a break. It’s a bug that definitely needs to be fixed

I doubt this will get fixed as it’s very circumstantial but I wanted to make someone know about it at least.

The trama was too much

Oh yeah that bug. Yeah the fix should be to just pull a number from the RNG

Ok sounds good. This issue is in no means urgent, it is simply an inconvenience I suppose.