I’ve thoroughly looked through phase history and indeed Cxco did need some spooky wood and the dark harvest, but they are one player, not the majority. Also I see later in the logs that Cxco was in the build dimension a lot, so it would appear that they didn’t need the whip that badly, or were waiting since they did not wish to spam the event. Regardless, the more I read the more I hear people expressing their distaste for you in chat. 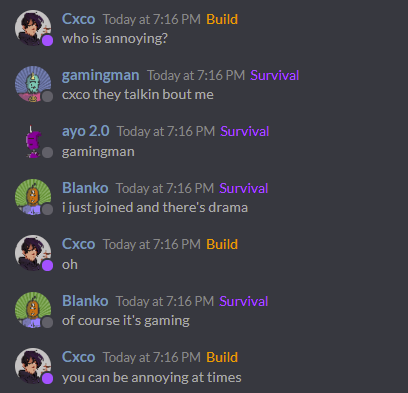 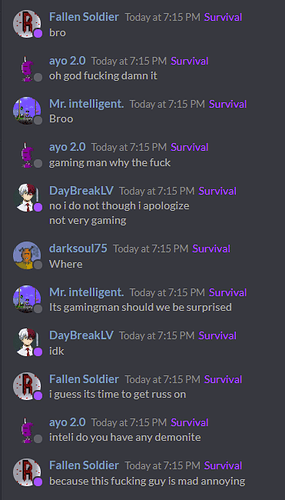 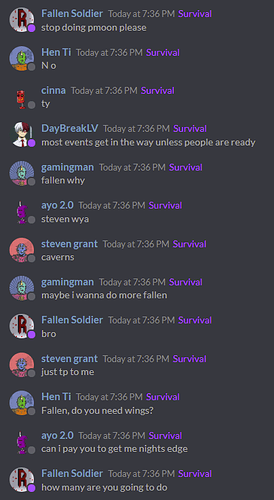 also i just read that, go a few minutes before and look at the 2+ (I forget) people chanting frost moon, and take a second to think how it might not be all me wanting that last one, though that might be a bit big of a thought for someone like me to have

I personally think you absolutely deserve your ban, I would not have made it if I thought otherwise. Also, I am not dragging anything out, rofle will be the one to decide whether or not you deserve to have crew perms, and he is not online right now, so you will just have to wait. If he decides that the ban is unnecessary then I will remove it, but for the time being the ban will remain until I hear back from him.

personally this right here annoys me to no end. you could have said on discord or at the start of this that there is no point talking with you since it gets me nowhere. i might as well just yell at my wall since both seem to be equally as effective at getting me unban. if you wish to keep talking here be my guest, but until someone who can actually make the final decision is here I am done.

Well another invasion was just started by Cxco just now, so I can vouch for you when you say that they needed the whip. The issue is what they say about you just now: 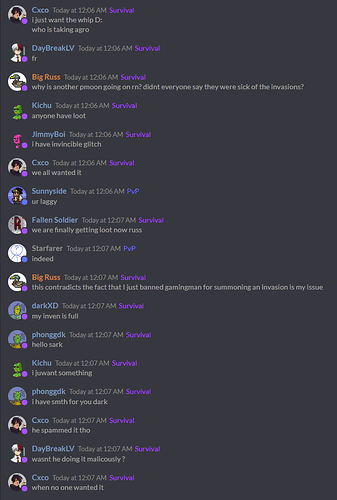 They themselves state you were summoning the invasions maliciously. Not sure what else you want me to believe.

bouta break my promise of not talking again since i hope this might go somewhere, daybreakLV asks if i was doing it maliciously, idk how you want me to prove it besides me just doing it to try and get the whip, and cxco says i spammed it yah because for summoners rn with everything being locked behind golem/ml all i can really do is just grind out pmoon for the whip

so we got any updates for me?

No, Rofle has yet to reply, and I am not going to wait any longer on making my decision.

People couldn’t get the items they needed because you were summoning the invasions before everyone was prepared for them, I have learned.

It seems like you do not see any issue with what you have done, as is evident here in your appeal and in my discord direct messages. All you have done is justify your actions, and that is not sufficient to getting unbanned.

Do you think I banned you on a whim, and then started trying to make a case afterwards? I already had some evidence on the pumpkin moons, and was online when you summoned two pirate invasions prior, and told myself if you summoned another invasion without proper justification, I would ban you.

The last time you summoned an invasion you only got two responses, one of which was a “no”. There were ~20 people online, none of which could be bothered to respond, and you thought it would be well-tolerated to just summon on this sparse of feedback?

I do not think this specifically is a very serious offense, but only recently do you seem even remotely apologetic for spamming invasions, and I am not convinced in the slightest that you would not just continue aggravating the other players like you have been if unbanned. If Rofle decides you should be allowed back onto the server with your crew permissions disabled I would be willing to change my mind, but until that happens, this appeal is considered denied.

Actually, I’ve had a change of heart. Since this is a relatively low-level offense, I think it would be more appropriate to give you another chance, and if anything like this happens again, I will pursue getting crew perms removed or keeping the ban.

I am sorry that it annoyed some people, it is a part of progression in the game, doing those events

Since you state you are sorry, I feel that you may be more inclined to not continue the unwanted behavior. If your intention truly was just to help other people progress and get better items, then please be mindful that there is a right way and a wrong way to approach summoning invasions. Usually it is best to ask the server if they are ok with the invasion, and if the majority wants it, then you are good to go. If you get a majority of negative feedback or no answer, hold off on it and maybe ask again at a better time. This will prevent 99% of the issues surrounding invasions. Having said this, I feel we can proceed to the next stage of the appeal process.

I believe you said this was the rule

Yes that is correct.