Hello to whoever that happens to come across this post, I’m MichelleZ, you might find my name somewhat familiar if you visited PvP dimension frequently during 2020-2022. 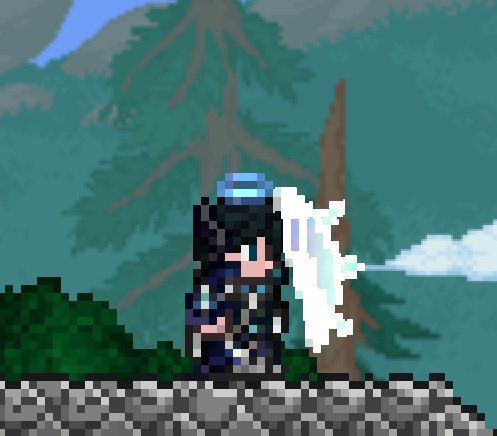 Here’s me in my glorious main vanity that I rarely put on these days.

If you haven’t heard as of yet, I unfortunately got banned today (Ban) [yes, again (Ban), but for a different reason], and I don’t intend to make a appeal for this one [not a proper one (as in not the kind that will get me unbanned but also not a meme appeal) at least].

However I do want to leave something special behind for those that I met during this two year period to look at (in the hope that I could stay in their memory for a bit longer), so this will be a post summerizing my experiences here on this server. 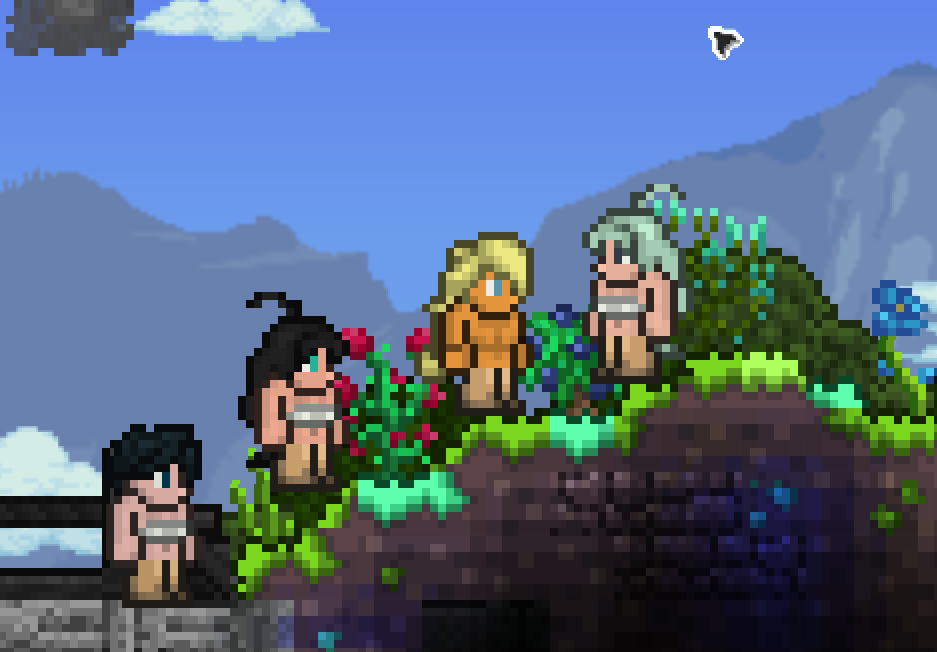 Before you continue, I think I should warn you that knowing myself:

HEY im back from the darkest depths of the Society

Anyhow, I just read another hilarious ban appeal by “Michelle Z”? It was a Ban Appeal but it just isnt, like yesnt. I mean, he did a Ban appeal, supposedly simply answering the question but instead made an essay and in depth analysis of his dum dum mistake and made it a tad to read even for someone like me who reads mangas and VN.

HEY im back from the darkest depths of the Society

This could potentially end up being a VERY long post with LOTS of images and a tad of SOMEWHAT disputable contents, so do be cautious continuing reading.

I joined this server properly around about mid July or so, 2020 (not counting the handful of times I joined before this with a guest character), so even though I wouldn’t consider my self a OG, I still think its fair to say that I’ve been around for a while now. 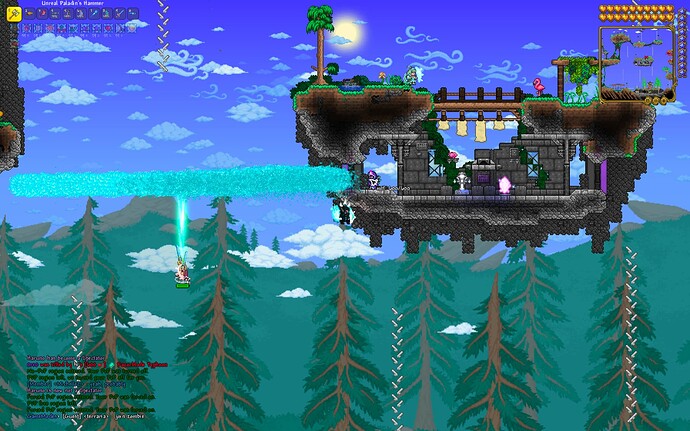 During my time here, I rarely visited any dimensions other than PvP and ITEMS (a tad of GAMEMODES for duel there, a handful of times in BUILD, and one or two failed attempts to get myself interested in SURVIVAL). Although I’m fairly mediocre (C in Terraria PvP Lounge & Combatant in DG discord) at it by pvper standards, I enjoyed playing PvP here VERY MUCH. To the point where I dedicated a little under 5000 hours of my life to this game (I mean I did other things as well, also afked a lot, but still). 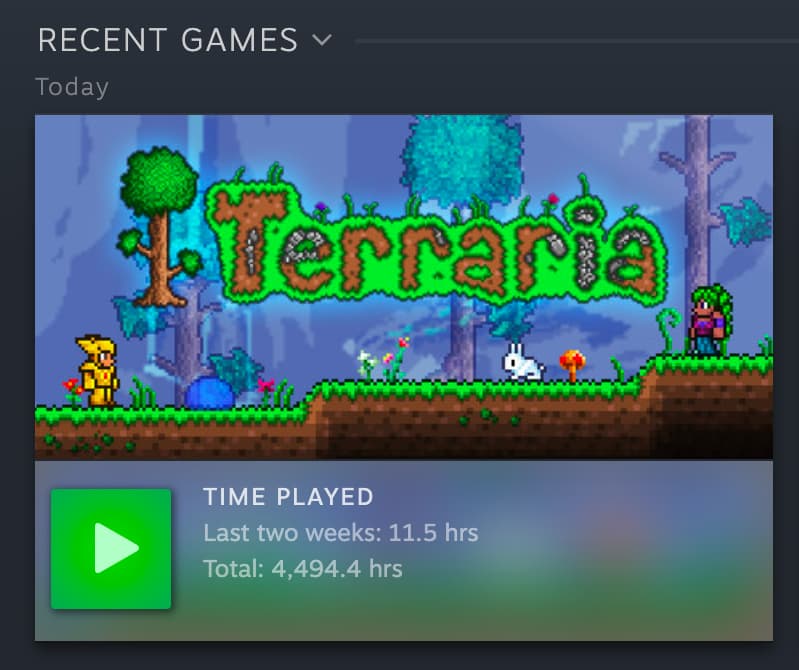 So much of this post will just be me going through my screenshots recalling events that happened during my time here (I do think this could make a good story tho). This is intended to be my farewell to those that I met in this community, this server, potentially this game, and this part of my life. Interesting how I’m also attending a graduation dinner tonight IRL.

Anyways, its 12:18 pm Beijing Time (yes thats where I live), I gotta go eat lunch and prepare for my afternoon activities. What I have here seems like a good start to me, I’ll probably return to this post tonight unless I’m too intoxicated from grad dinner. See yall soon.

Welp, goodbye. But will there be a Netflix Adaptation of this in the near future?

Welp, goodbye. But will there be a Netflix Adaptation of this in the near future?

ill make a michellez tribute if i can bother

Mich can finally rest in peace if that’s gonna happen

We wish you goodbye and we wish you a happy future.

Another one of us are gone goodbye friend, hope you enjoy your endeavors such as I have.

dont know what else to say ig

Took longer than I expected, but I’m back to life. Lemme think. Maybe I should fill in some more backstories.

I was first introduced to mobile version this game around grade 4 (year 5), I vaguely remember calling it ‘fake minecraft’ to spite friends for fun, but it didn’t take long for me to fall in love with it too.

Though not entirely sure (bad memory + im too lazy to look into it), I’d say the version was equivalent to pc’s 1.2 something, but with ocram & all those long gone mobile-only contents.

I think I got interested in terraria pvp around mid 2015 because of some random pvp tutorials on Chinese (yes i’m ching chong) forum. Looking back, it was some rediculous stuff, like trench digging tutorial (【图片】回复：【开坑】【PvP】【建筑】战场基础土木及相关理论———【醒目【terraria吧】_百度贴吧). I couldn’t join them though, was still playing on my shitty iPhone at the time, so I even made a mobile pvp group chat later that same year (which died VERY quickly of course). 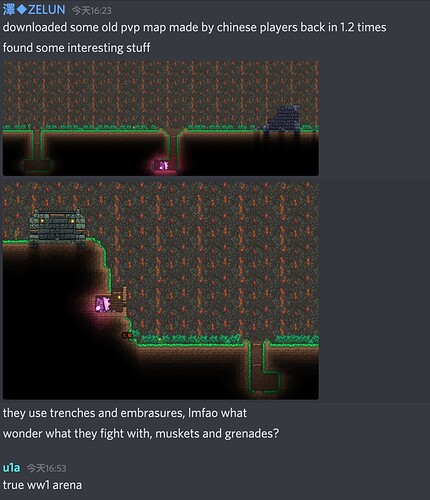 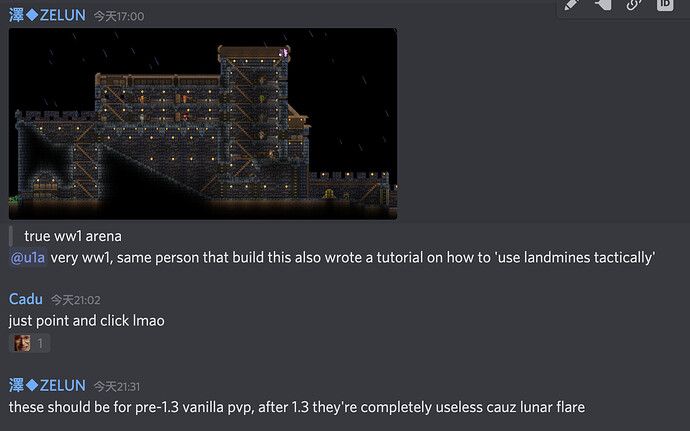 I also built some small pvp maps myself back then, but I never uploaded them (I don’t even know how back then), and no one played in them, so it was quite pathetic. I had some fun building though.

Aside from this, my mobile terraria experience was, quite ordinary. Worlds I spent months on crashed (not sure if this is the right term to use, but I imagine old mobile players should know what I’m talking about?) 2-3 times, so I lost interest in the game around (probably before) 2016.