[Q1] Provide the Ban link or if none, the reason
I was removed from the Terraria discussion on phase (no link). If there is something else I should enter here to make this question valid, please let me know.

[Q2] Did you break the rules knowingly?
No. I now know that the most probable reason I was removed was for adding Suplerbz, who was removed himself separately. I thought that this was an accident (occasionally, people remove themselves by mistake, and the messages I saw led me to think that is what had happened). I now know that Suplerbz was probably removed by a staff member instead of by himself (for a legitimate reason), so I wouldn’t have returned him to the discussion if I had known this was true.

[Q3] Do you think your Ban was fair? If not, please provide a reason.
Yes. However, I wasn’t given an explanation yet and do not know why Suplerbz was removed in the first place, which is why I was confused and made a mistake that led to this sequence of events.

[Q4] Why should we unban you?
This ban/removal was fair, but I didn’t understand the circumstances at the time. Nobody said why Suplerbz was banned, so naturally I didn’t know what was going on. I still do not know why Suplerbz was removed or who removed him, Glasia, Grim Wind, and myself. From process of elmination, I think Rofle is the one who removed us.

For clarification, these are the messages I saw on Discord which led me to think that Suplerbz had just removed himself: 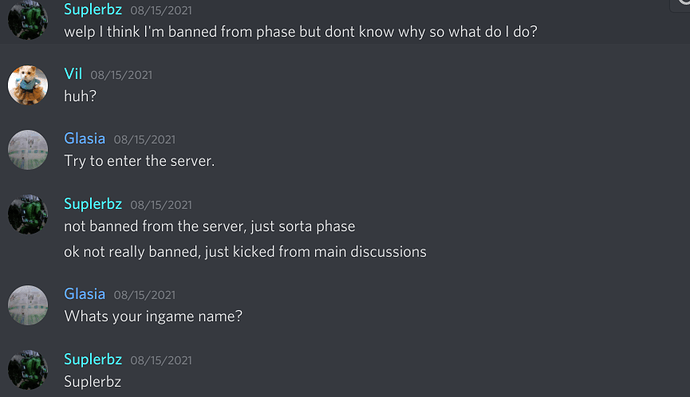 (The messages afterward I did not see until I switched tabs and had already re-addded him to Phase.)

I forgot to bump my other appeal, which is why I am posting a new one.

Well, he said himself that he was kicked from the main discussions, not that he removed himself. I would advise you to leave it up to Staff to add someone into the main discussions if they are not in them, in case they were removed by Staff. Hopefully, I can address this problem in the future so that it doesn’t happen again.