Shadow’s Descent is quite infamous due to it being all painted with shadow paint, making vision almost impossible, thus people tend to get lost or fall to lava easily. Today I decided to make this guide regarding how you can play on it, as it is quite an easy map really, which also grants you a unique ability (needs Crew) when you beat round 15.

The following image is a screenshot of Shadow’s Descent, but I highlighted all of its blocks so you can have a better look of it. 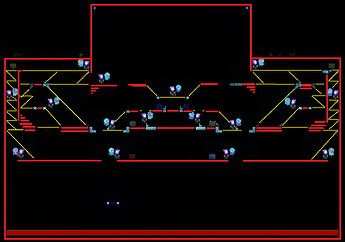 (Some white blocks not highlighted as they are visible)

The classes in this map consist of mage and melee. It is preferable to pick mage class, for the reasons being its weapons cover for the whole map, last upgrade of one weapon chest being Razorblade Typhoon and 5 MP costs only 500 points, therefore making it easy to have 400 mana (maximum possible). On the other hand, for melee, Shadowflame Knife and Scourge of the Corruptor can also be handy, but if you are playing in a decently big group, most should go mage.

The floor below the class chests is recommended for camping. All lobby players should stay there for nearly their whole time on that map, making some enemies unable to target them directly. While doing that, one person can choose Sentry ability and on the platform above the class chests can put a Tank sentry to attract the enemies and keep players safe while also farming points with banks. The rest of the players have two options;

While this map may not be liked by many people, in reality it is underrated. Not only the camp point mentioned above makes it quite easy to play it, but it also rewards you with the Wish ability after round 15 is beaten (remember you need to be Crew to obtain that). The map is also quite fun with friends.
Learn more about Wish here;

An interesting (albeit a little quirky) ability is Wish. When you use it, it gives a random effect that usually favors your current situation. (e.g. being at full health will favor max HP wishes which gives +50 max HP. Being at low health will favor regen/healing wishes.)

What wish can do

Or y’know, get some shamans, get at least 1 minimun light spirits or people in lobby / 4 with more than 3 people, then everyone else shadow spirit, camp near zombies spawn, then just shaman the heck out of everyone

It’s a proven strategy to get wish

And if you have more than one device that one can be used to just revive people and more quickly max out your health storage.

And if you have more than one device

What do you mean by that?

If youre not on steam you can join from the other one using a different character and just afk on that device.

There are endless possibilities with this. . .

Yah I only considered using one and having it afk while shamaning to increase max health.