Ban appeal for my misbehaviour

[Q2] Did you break the rules knowingly?
No, i didn’t know it was forbidden because i didn’t read rules

[Q3] Do you think your Ban was fair? If not, please provide a reason.
I read the rules after getting banned and realized what i did was wrong.

[Q4] Why should we unban you?
First of all im so sorry for joining server with Rofle’s name. I wasn’t malicious while doing that i just thought it would be cool so i did. I’m sorry for this incident and I promise that I will never enter the server under any other name again.

You need to follow the format. Add back the question for Q1 (move your ban link down a line) and bold each question by adding 2 asterisks to the sides of each.
Do not post a new appeal; edit your existing one. Post a reply here once you have made the corrections.

i fixed it now

I wasn’t malicious while doing that i just thought it would be cool so i did.

If that was your intent, why did you make a claim to authority while already impersonating a staff member? 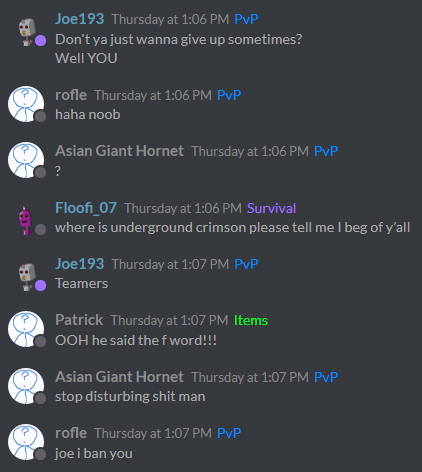 There’s also something you didn’t mention in your appeal that you were banned for: why did you register multiple accounts on the server?

Well, when i got banned i felt really sad and immedietly post an appeal with that feeling but i’ll be honest this time. I write that because i wasn’t thinking about my actions neither the words i use. Someone has to warn me about that because some people like me does not realize that what they are doing is wrong without warning. After that i read rules carefully over and over again, eventually im changed and i promise to follow the rules.

And about multiple accounts. When posting this appeal i didnt realize i also got banned for multiple account. This is going to be a little weird because you may never have heard of something like this, but I’m telling you.

When i first registered this server under the name “Musacan” i played for few weeks, then i had to quit for over 6-7 months. Later on i decided to back join server but i forgot i already had an account “Musacan” so thats why i registered “proman31”. Afterwards i tried to connect my steam account so i could get crew. But while im trying to do that i got a message saying:“This steam account already linked to another account”. After thinking a bit i realized i already had an an account “Musacan” and login that one. Then i never used “proman31” again. If there is any way to do it i will delete that account.(my english is not good, sorry if i made mistakes)

Using the name of, claiming to be or hinting at your identity being that of another person is impersonation.