[Q2] Did you break the rules knowingly?
I found know Rule Breaking such as sexual content OR personal topics…

[Q3] Do you think your Ban was fair? If not, please provide a reason.
I dont think this was a fair ban as I was saying how a player turned into the angler as we all hate the angler (I hope) and were burning in lava for eternity…

[Q4] Why should we unban you?
Well there is legit no point in banning someone for FALSELY ACCUSED “sexual and personal topics”
I would like a further explanation on what sexual stuff or personal stuff I said.

…what? Did you break the rules knowingly or not?

I dont think this was a fair ban

What makes you think the ban was unfair? You broke the rules many, many times over many days, and several times it went completely unchecked.

Profanity directed at other users: 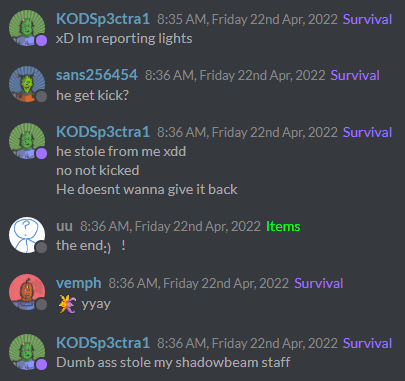 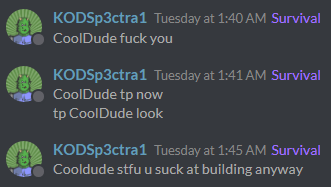 Talk about sensitive topics in chat (some directed at other users, others not): 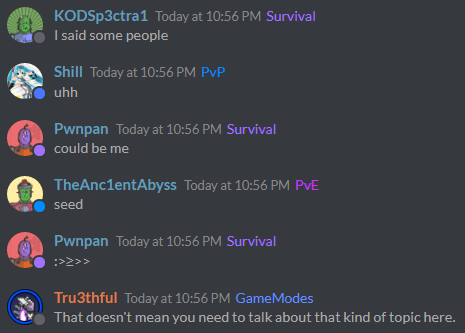 Then, leading immediately up to your ban, there was first this:

And after warning you not to proceed since that topic is not appropriate for the server, you said this:

While I was gathering all the previous Phase screenshots, the sensitive topics seemed to just keep escalating:

It doesn’t matter that it was meant to serve as a joke, what matters is that you kept talking about these kinds of topics for excessive violence and whatnot after two separate warnings. Are they on the level of all the colorful language you were using prior that didn’t receive a lot of attention beyond reports, or even the pedophilia(??) that you were warned for before this? No, they aren’t. But they fall under the “sensitive topics” part I listed in the ban reason, so I’m sorry for not making that explicitly clear in the first place.

oh wow, I didnt realise I was talking about this all. You are 100% right and I dont deserve an unban I guess. It was nice knowing the server. If I can be honest, it was not right of me to make these jokes, and I never saw a “warning” from you or anyone A. due to flooded chat and I am used to mc warnings like where it pings you or shows a message private to you in big text, so I didn’t think you were talking to me. But you are 100% right and I apologize.

These were all directed towards jokes, but now that I read them again, they WERE NOT, funny at all.

This is not an excuse btw it is literal truth.

By the way, what is pedophilia?

and I never saw a “warning” from you or anyone

Well, to be fair, most times you didn’t receive a warning, as far as I was aware. I just cracked down last night due to there being multiple reports against you for your language, and I believed there was enough evidence to warrant a ban. It doesn’t matter if it’s for jokes or not. With how much you were using the language you did combined with repeatedly talking about topics that might make some people uncomfortable in public chat, I had to take action. After all, Terraria’s playerbase is quite diverse in age range, and because there is at least some amount of a younger audience playing the game, and by extension, the server. Do you understand why using the language you did to the extent you were led up to your ban?

To be very blunt, it’s sexual attraction to minors in some capacity, especially while the person in question being accused of it is an adult. The Angler is portrayed as a child in Terraria, which is why I was warning you against discussion about the kinds of topics you were before your ban, e.g. “I think several people here want to rape the dumbass.” And you know, I get it, Angler fishing quests can be annoying at times, but at the same time it’s not an excuse for publicly talking about doing stuff like… that to him.

Oh, and yes. I do see why it led up to my ban. Me making others uncomfortable, probably hurting ohers, and just being stark annoying and innapropriate… I apologize dearly.

Ah, that makes sense. You are all the way right, I’m not just saying this. I really mean it.

This is Im pretty sure the rule I was breaking, I hope I did this right…!

Correct, though there’s also this one:

Yes I understand the rules I broke
I understand how to avoid them again, by maintaning calmness and chillin.
I promise not to break the same rules again.
I understand that if any of these are broken again, there will be no 3rd chance.

Also sorry, didn’t think bout that one. I thought it was mainly rule 6. Thanks though!