[Q2] Did you break the rules knowingly?
No.

[Q3] Do you think your Ban was fair? If not, please provide a reason.
Yes.

[Q4] Why should we unban you?
I now have a better understanding of the rules, and I am sorry for what I said. I will not make any mistakes like this in the future, and I will take the rules more seriously. I would just like to play on the server again. Thank you.

Looking back at your messages in game, why did you refuse to believe it was staff impersonation?

Before I was banned, I thought impersonation was only limited to using staff members’ usernames and didn’t think much of it. After being banned, I looked over the terraria server rules, and I now see what I did was wrong.

I thought impersonation was only limited to using staff members’ usernames and didn’t think much of it.

That doesn’t really convince me, when you were reported for staff impersonation you said the same message as you did in game: 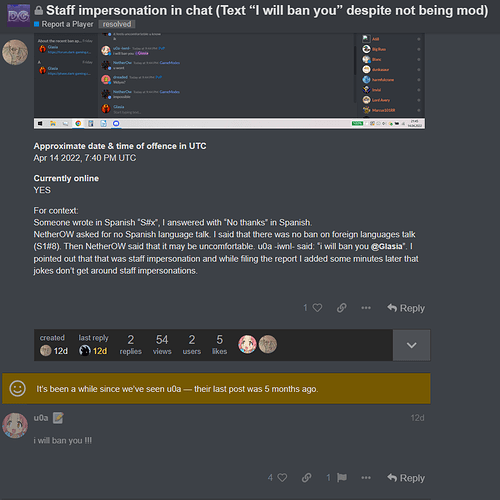 a883×883 83 KB
Looking at the report it clearly tells the exact rule you broke. The message you sent both in game and forum were unexpected, this makes me conclude you are targeting a specific member of the community, it’s noticeable you are exposing your hate among the player you said to, why is that? what were your intentions?
6 Likes
u0a (u0a) 27 April 2022 05:08 #16

Originally I said it as a joke in chat, and on the report, (though I know jokes don’t get me around the rules,) to mock Glasia, which I regret. I replied “i will ban you” minutes before the ban, when I didn’t know the gravity of what I said had. I know it was foolish and immature of me, and I apologize to Glasia for it. I have realized over the past couple weeks that Glasia is just trying to further enforce the rules to benefit the community. I never really hated them, I just felt that they were irritating at times, and I am sorry Glasia.

Why right after the report you sent this message in server discord: “bye @Glаsia”? So you knew you were about to be banned, as result making [Q2] incorrect.

No, I said bye after realizing that I’d soon be banned in the discord, because I had already seen the ban link in-game.

This is the rule I broke:

Using the name of, claiming to be or hinting at your identity being that of another person is impersonation.