This is how you run tank on survival. If you don’t like grinding, I recommend you do not run this class.

Potions
The only potions you will need is ironskin,regeneration,endurance,life force and any major food buff.
Pre-Hm
It is impossible to tank in pre-Hardmode, as there are no aggro items available in this stage. However, you should get a obsidian shield, feral claws, potions, a ton of money, and the two evil bosses accessories.
Mechanical Bosses
The accessories you should be using right now is frozen turtle shell, worm scarf, brain of confusion, Flesh knuckles, berserker glove, star viel, and obsidian shield. The armor is titanium mask, and frost chess pieces and leggings. The only needed weapon for this stage is Sergant United Shield because it grants you 20+ defense when you block.
The destroyer
Destroyer is not much of a threat to a tank, as the probes serve as free iframes. You could almost die a few times, but other then that, destroyer is a piece of cake to tank.
The twins
The twins are slightly more interesting, because you do not have access to ankh shield, therefore ditching one of ur accessories for Armor polish. The accessory you should ditch for armor polish is flesh knuckles. When you are close to dying, do /tpnpc nurse. You need to be shield blocking at all time.
Skeleton Prime
Skeletons prime spin is impossible to tank atm, so when he starts spinning, run around the arena in a way where you can easily hit him. Your free to attack while he is above you, or when ur running around. I would use the goat skull and the doc dash.
Plantera
Planteras load out is the same as mechs, but replace your armor for turtle armor. You can facetank the first phase, but the second phase you could dodge or ur a emergency exit.
Post plantera
Your accessories change to Master ninja gear, worm scarf, brain of confusion, hero shield, frozen shield, star viel, and berserkers glove. Also, you do not need vampire knives for tank, but get it if you want. Reason is because of healers.
Golem
Use Post-Plantera loadout, with ofc honey, a chair, the sergeant shield/inferno brand and/or Vampire Knives
Once Golem is down, make the TANK (higher defence) beetle armor, see below

However, you can make the tank beetle armor, replace frozen shield with shiny stone and replace berserkers glove with a celestial shell.
Lunatic Cultist
You need to set up a proper arena. You will use it for both cultist and moon lord. 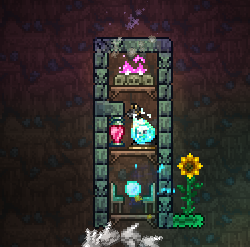 This should be your arena design, and you should have at least 1-2 healers supporting you while you sit there. Do not hit clones.
Moon Lord
Same load out as cultist. Make sure you have a minion out to hit core. You ALWAYS need to be shield blocking for this fight. Your vampire knives and mage healers become useless. When the teocs come out, you need to pray you don’t die. The order of moon lords eyes should be:
Get both hands extremely low
Then get top eye low
Kill all at once.
It is possible to last the entire ml fight if there is a backup tank.

Events
I will be talking about the moon events here.
Pumpkin moon
For pumpkin moon, you should have at least a heavy hitter, a starlight, and 2-4 healers. You don’t need a tank box for this, since you need hearts to survive. That means you also need a heart reach potion.Make a bed near where ur tanking so if the supports die, they can come back without getting spawn killed.
Frost moon
It is impossible to tank frost moon because of frost queens inflicting frozen debuff. Also, it’s not as easy to collect hearts.
Optional Bosses(Queen slime, empress of light, duke fishron
Optional bosses that are not needed to progress any further, but useful.
Queen Slime
Using your pre mechs load out, make a box as ur tankbox and the other stations. You have to face tank the first phase, but she leaves slimes behind that can serve as free iframes. When she is in the second phase, while she’s flying, make a roof on top of your head so she can’t hurt you(might not work every time). Your free to attack when she can’t hurt you.
Empress of light
Empress is not too hard to tank, but you should have a healer with a bat scepter, incase. Note that people should be above empress, to reduce the chance of aggro steal.
Duke fishron
Duke is very hard to tank, and you will most likely die to it. You can rely on ur healers while you pray that you don’t die, or spam vamp knives. Note that you need a roof because cthulunados are untankable.
———————————————————————
You need 500 hp by the way. (if you got it, highly suggested)
Things you should have on you are:
Bast statues
Heart lanterns
Campfires
A bucket of honey
Sunflowers
Bubble blocks
If I should add any other things; lmk.

Golem
Golem is s piece of cake, I don’t need to explain this.

Nah it is srill easy to tank