[2] Report: what rule(s) they broke (quote them)
#1 Hacked Clients [or Modified Clients]
All types of modified clients, that deviate gameplay functionally in any way from the original Terraria client; this also includes using 3rd party programs, such as Inventory Editors, to modify your character to possess impossibilities, but texture packs that do not alter game mechanics (e.g. hitboxes) are exempt. Warnings may be given, however due to the nature of the people using these clients, warnings may not be required, and in cases where this affects other players in a negative way, to a degree of selfishness, then the ban may not be appealed.

[3] Did this affect anyone (e.g. they were using their hacks in PvP)?
They were causing a lot of lag and were filling the entire screen with razorblade typhoons. 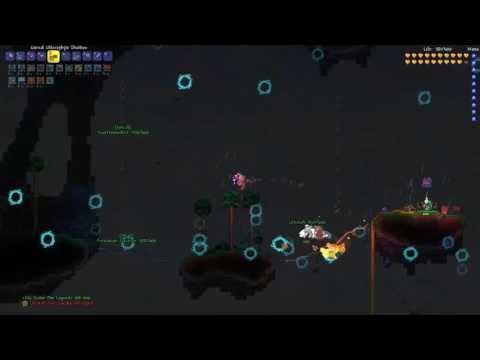 I can’t see in that video any evidence that it was Claudio.

Really? Well, everyone was saying it was Claudio and I wouldn’t make false reports. Do you really need to see me point at him? I don’t think you could just let a hacker free because of this.