[2] Report: what rule(s) they broke (quote them)
#1 Spam
Spam is not tolerated in the chat. An anti-spam plugin is in-use on the server to control spam while limited moderation is in effect, however, spam is punishable by Ban if the spammer shows no reluctance of future spam.

[3] Did this effect anyone (e.g. they were using their hacks in PvP)?
Disturbed the chat with no sense, random letters. 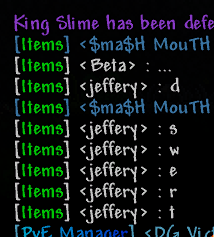 [6] Dimension: (if this is a server report)
/Items

What do we want ? /kick CMD

I agree with Aug that helpers should get /kick. I know it’d be “Too big of a privilege” or “people would abuse it” but Rofle should give it to people who he thinks are mature enough to use it

Helper and Staff-Assistant are two separate roles. Perhaps it might be time for this to change.
Player is now banned, thank you for the report.