Reduce DP multiplers by x0.5? (and other measures)

I initially didnt wanted to post this, because i thought that i was the only one that actually wanted this,and i lack of arguments, but i found that some people may like this , because, well… 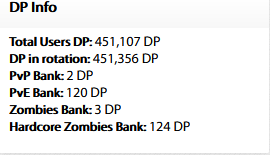 The DP banks are pretty much empty all the time, or just with <200 DP,which, may be not an issue As long that you have DP always , this makes very hard recovering from 0 DP , or for new users even getting just a little, mostly because its way, way to easy and fast to obtain, the main thing is that, if any member that has registered in the trading system, and dont cares about DP, he still can obtain about 900 in a public zombies lobby, and therefore having “Freezed” this amount, and never actually using it

So if the multiplers get reduced, the DP drain may be enought to keep it moving and not being there for all the ethernity

Mathematics of the Economy

The core DP multipliers have been updated and are now 6x higher roughly.

)
Before this, the banks were almost with 22,000ish DP, so maybe just halving the actual gain (or x3 as originally) , will at least make harder to reach this point where DP lacks, and in the best case, make a stability where DP is always avalible ,at least some value close 3000~DP

Other important part is the DP actual bank, which Its not enought to the amounts of players that we have
and the fact that is getting smaller by the time (Was the total of 500,000ish at August 2X)
so other solution may be increasing the banks sizes, to at least 4,000,000ish, but if this happens, the Dp multipliers should be reduced as well, and would help making the Softcap of DP to 15,000 so its actually posible to buy things like inventory space, or the shop, but it would requiere work to get, and not anyone could reach this easily otherwise this is likely making us return to square one

and unless this is kinda your strategy to make people trade for DP lol, i would be fine, except for the part of the fee lol

alternatively , im also fine if you increase the DP drain by >X2~4

Also err, if the new trading system is close to be released (1~3 months), may be better to just ignore this suggestion and let the things be as they are

I don’t think that there is enough dp in circulation to accomodate all the users of dpt so I don’t quite think solely the multipliers and banks are the issue. Remember, the shop prices are much higher than the current cap which I believe is 5k dp, so lowering the multiplier would only make dp harder to get. It would not impact how money is spent either. The issue with the banks always being empty is caused by the low dp drain rate from all users, and the shop prices being so absurdly high. No money is being spent, which refills banks quicker than the slow drain from all accounts, and we are forced to hold onto what little dp we have to preserve our efficiency.

In part, i give you thereason, because, yea, the Dp is not enought for the amount of players, and also that is being reduced slowly, doesnt helps (focus on the DP in rotation value)
(this was Total DP at August 22) 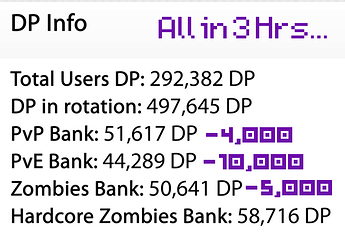 and now Total DP is this

Being reduced like this also contributed in the effect

But mostly i want to focus on this

so lowering the multiplier would only make dp harder to get. It would not impact how money is spent either. The issue with the banks always being empty is caused by the low dp drain rate from all users,

That is a bit of the point, while its true, has something behind

However, if we make this change, the DP our user gets now is 50DP per day, meaning that Increased the lost value to 42%

while this purely only , yea, makes the DP slower to get, means that actually , We are increasing the drain in some way So it would take longer to the users to actually do the same thing that is now happening

And the other factor, is that we are directly Making that the users that dont get more than 42 DP, actually returns them to the bank

so now at the “Inactive hours” would be more DP avalible, because they are not getting enought to actually maintain this number

but yea, i have noticed that your point is very important, becuase if we say that every active player has 4000DP, that is only 112 users needed to keep empty the bank, which is a little amount

So imma rewrite some things, and Tysm for the opinion and criticism

TL;DR Inversely proportional increase
and yea, we need a bigger bank, the actual one only holds 110 to 150 active players

indeed, the banks for pve has been on life support for a while now, more dp needs to be out in circulation

Dp loans from dp banks when.