Oofity Scammer (not the first time tho)

Scamming other users is not allowed. This includes, but not limited to, tricking players into giving you items, deceiving players in trades, and lying to other players to gain an advantage. If you break this rule, then you will be warned, kicked, and possibly banned.

If you drop an item for someone and someone else picks it up unintentionally and does not give it back, this is not scamming. You are expected to take precautions such as not trading near other players and turning on teleport protection. However, if someone is trying to catch item drops, you are trading to someone else; this can be seen as a violation of S0#4.

[3] Did this affect anyone (e.g. they were using their hacks in PvP)?
Affected the player Mr.Memer Man, who were going to trade his paladin’s shield for a influx he supposedly had.

And then he scammed the guy and gave an fake excuse and left.

I have indeed found evidence of them suggesting they scammed another player a separate time. I do not believe that Oofity can be trusted to follow the rules of DG. 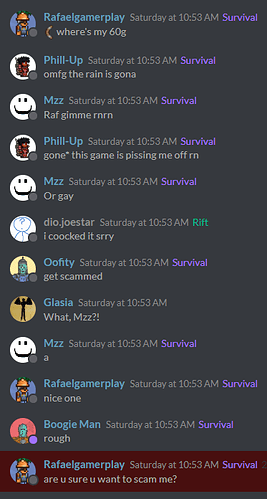 Rafaelgamerplay then questions Oofity about this exchange, and seems to get ignored. 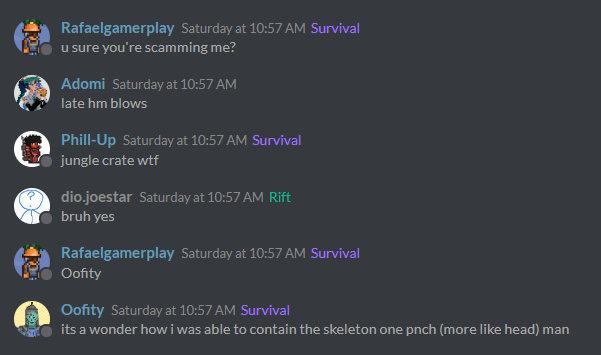 While I cannot prove that Rafaelgamerplay got scammed on the day above with chat logs alone, it does reveal pretty well what Oofity is like, and I do not think that another accusation of scamming put in today is merely a coincidence.