[Q1] Provide the Ban link or if none, the reason
i put a decent amount of items in chat and russ also talked about how he just disliked how i act on the server

[Q2] Did you break the rules knowingly?
sort of, i assumed russ was just annoyed at my earlier posting of my herbs in chat and assumed different things im selling is different and ok, and ikd what else i got ban for so no since russ went on about how he doesnt like me and ive been some plague on humanity since my unban

[Q3] Do you think your Ban was fair? If not, please provide a reason.
no, russ clearly stated it was a ban out of bias which is not a fair reason to ban a player

[Q4] Why should we unban you?
russ ban me out of anger im not sure if he ahs other reaons he blocked me on discord so i couldnt ask the whole reason

I’ve made this decision based on your behavior that I’ve observed since I unbanned you. 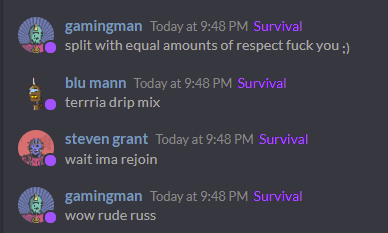 You used profanity at another player, which is already a red flag. You were banned for maliciously spamming invasions, and this behavior does not make me confident that you are not just as toxic as before. You even have the nerve to sarcastically comment on me kicking you.

Second:
You ask me what class you should go in the survival discord channel. 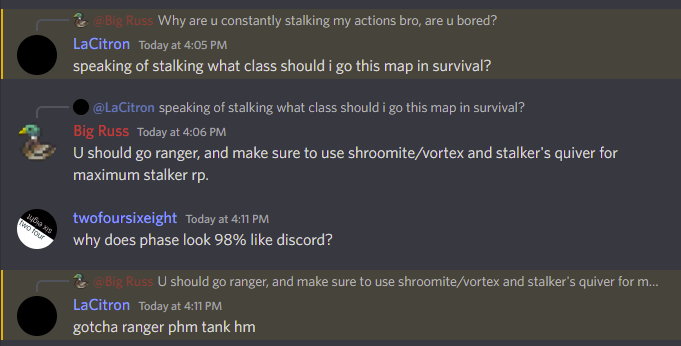 I respond to you with humor. Nothing is of issue here.

Then:
You later ask other players what class you should go. 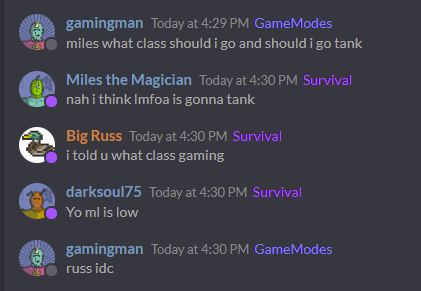 I respond that I already gave you my opinion (which you asked for in the first place) and you respond with “russ idc”. This tells me that you went out of your way earlier to try and make me feel stupid, and did not care in the slightest for my opinion in the first place. This is not typical behavior from any decent player on the server. You are simply showing your true colors, as a toxic player that is a pain to deal with.

Third:
I have observed you intentionally ruining other players farms by using your tank gear’s aggro.

You were just sitting there, intentionally ruining Cxco’s and Raf’s farm. Also the fact that another player comments that we are having yet another dispute shows that something is not right with this situation.

Lastly:
I made an OBVIOUS joke in comment to something someone said in chat earlier, and you immediately take it upon yourself to point out that I am clearly in the wrong and am horrible for what I have said. 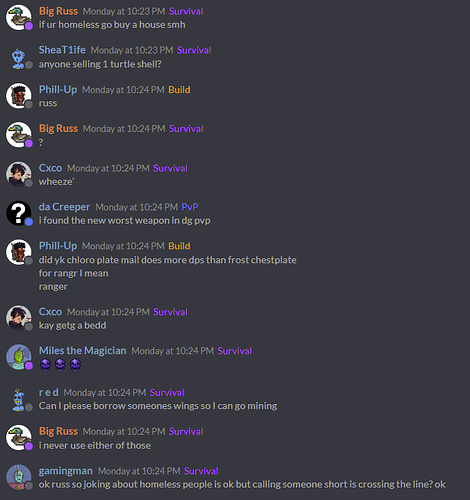 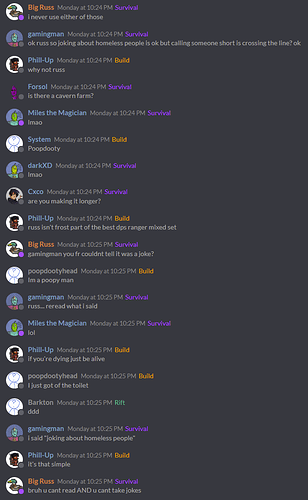 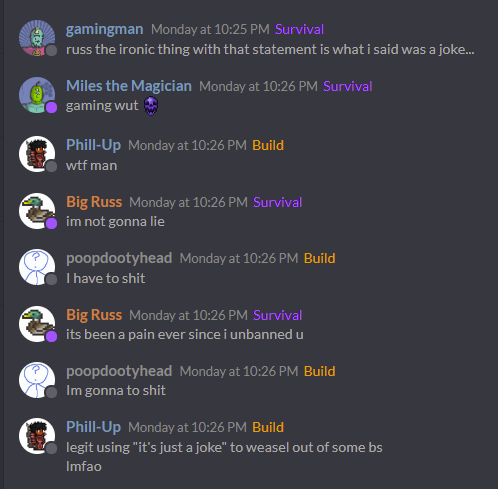 Phill-Up is 100% correct. You are trying to take every chance you get to make me out to be a fool, and you are constantly saying stuff to me to try and provoke me. I am fed up with it, and will not tolerate that anymore.

I have been fighting with you constantly since I unbanned you, and you clearly are just becoming braver every time I just leave things as they are. You were banned for using invasion summons in a toxic manner, and your toxicity has really not changed since I started monitoring you after you appealed. Quite frankly, survival is a better place without players like you, who feed off of getting others riled up. For this reason, I have rebanned you. This appeal is denied. I will say it again, I am fed up with dealing with you. Do not make another appeal, this decision is no longer negotiable. I am the one handling your ban appeal, no one else has permission to handle this unless I am told otherwise by those above me.