[What is the actual item/mechanic/thing being targeted?]
Kaleidoscope

[What would you like specifically changed about it?]
Buff the base damage by 10-14 and increase the max damage by 7-9

[Why do you feel that this change is needed?]
Kaleidoscope could be a viable phammer-class rush weapon, but as of right now it’s a bit underpowered and fairly useless (does like 28 usually). It was already mostly unused before the armor changes and now it’s pretty much trash

No, It’s fine, It’s nearly hitscan with a big hitbox, having more than 30 damage would be just OP

The hitbox isn’t that much more than a normal Phammer’s. You’re right that it is much easier to hit, but the damage is completly terrible atm. I don’t expect it to hit over 50-55 a lot, but it should at least be viable (right now it’s in virtually no kits)

The hitbox isn’t that much more than a normal Phammer’s. 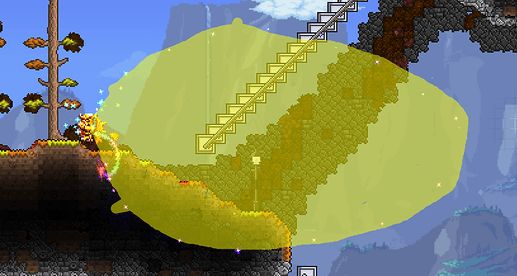 image705×348 79 KB
that without counting that kaleidoscope doesnt get affected by your speed, also swings really fast and that i also had 40% increased melee speed in that screenshot

around 30 damage is fine, it’s more than enough for a weapon extremely easy to hit that also swings really fast, just use dark harvest

The kit you’re using in that photo probably has a bit more melee speed than most, considering you have two gloves. It goes about 10% shorter than that. However, you’re right on how it’s easier to hit; but it’s not doubly easier to hit by far. Paladin’s Hammer currently does roughly 200%-300% the damage of Kaleidoscope, so it should definitely not be that much better. With currently 25 damage a hit, you would have to hit 24 times with Kaleidoscope to kill someone if they had 600 HP and no regeneration; 30-35 times is more realistic. This may not sound like a lot, but it actually is and is MUCH slower than literally anything else at the moment. I think my initial buff is too overkill; I will change it a bit, but Kaleidoscope is nowhere viable right now.