[1] Members name.
Cookie l1l1lll1lll1ll (not sure if is correct

All types of modified clients, that deviate gameplay functionally in any way from the original Terraria client; this also includes using 3rd party programs, such as Inventory Editors, to modify your character to possess impossibilities, but texture packs are exempt*. Warnings may be given, however due to the nature of the people using these clients, warnings may not be required, and in cases where this affects other players in a negative way, to a degree of selfishness, then the ban may not be appealed.

[3] Did this affect anyone (e.g. they were using their hacks in PvP)?
Yes, massive lag 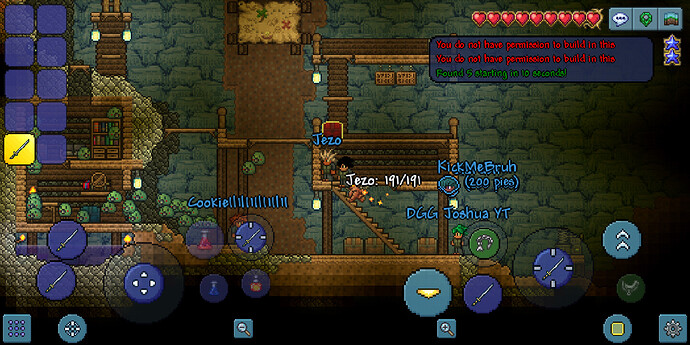 [5] Dimension: (if this is a server report).
Gamemodes-Zombies

This might also be ban evasion; I reported someone named “cookie summons” who was doing the exact same glitch, with the slimes as well.

Same, it seem summoner on pvp useless but wip is good

I think a lot of people use this (even though it’s not effective).

Its honestly terrible due to the amount of player traffic that’s in PvP so if you have infinite summons, someone will notice it. It’s not even practical either…

Geolindrag, i guess it suppose to be crash for mobile, massive lag for pc, i think?

Yes but actually no

Depends on your RAM , for me i get 3 FPS (but that is nothing new…)
eventually, when you play at an overall 5 FPS, for a long time, you will adapt.

,the problem is for the people that are used to be at 30+ Fps, (and the server for the number of proccess).

Rarely thigs like this end in a device crash, the real affected is the server, because there are all the game data being charged, for the users will only drop the FPS

What is your ram? My ram is 2GB well easy lag

Also deppeds on the procesator, but about that, i don’t know much,also in your wi-fi, if you have a 5mb wifi, will get a lot of lag spikes, and this will end of your device trying to load multiple things at the same time, and again… This will down your FPS a lot for a moment

There was a person on the discord too, reported by invis called like l1l1l1l1ll1l11l or something one shotting with terrablade

I think thats the invincibility frame exploit, not summons.

I already do decrease everything, grafic low, gore off, fps 30 And it still lag or crash/not response ;-;

It’s a glitch where mobile players’ attacks sometimes dont give invincibility frames to their target, making the target take damage once per frame.

I guess my procesator is weak?
And am using 4G cellular

The hacker is online right now, should i ping mods on discord?
He is not doing anything, so i can’t make another report

I see him, he’s AFKing in Gamemodes

your IGN is just “yems” without mayus?

Hes just like PedroSanko but hes moving and he have infinite minions then my phone crash during very very lag.
But idk where he is now im think he ban in both forums and the server.