Dark Gaming has one of the PvP arenas of all time.

Jokes aside, DG’s main arena is actually quite polished, with its various sections providing interesting areas to navigate around, for randoms and veterans alike.

DG’s main arena is pretty good, but did you know that there are actually several other arenas made for dueling? 7 in total, to be exact. Most of them are used in the Duel gamemode.

In this guide, I will go over the main DG arena by each of its sections, and then I will summarize each of the 7 duel arenas.

This is (a majority of) the main ffa arena. Like I mentioned, the design is quite solid, with a lot of areas to work with. Both ends of the arena have their own bed areas with spawn protection, which can be accessed with /warp leftspawn and /warp rightspawn.

The top area (which is cut off in this screenshot, whoops) has a platform with a cross statue on it. Standing in that area will grant regenerative buffs, so the area is intended to be a regen spot, like a honey pool.

Speaking of honey pools, there are a total of four honey pools spread out in each of the sections of the arena. One in the top left, one just left of spawn, a tiny pool right of the house, and one on the far right, below the bar island.

Each section of the arena is used, which may seem surprising considering how big it is. All of the sections aren’t created equal, however. 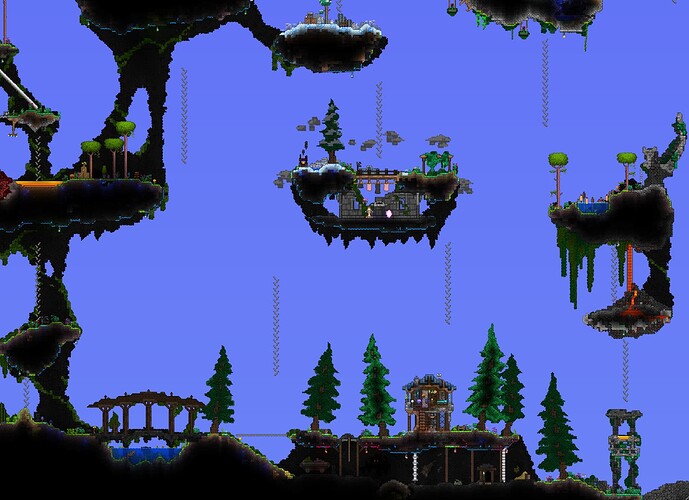 This is usually where a majority of the fighting between random players takes place. It is basically one big open area, which is ideal for those fights, but there are also caves and corridors where camping usually takes place.

The house at the bottom is the prime camping area, as are the trees next to it and the cave below it. The honey pool on the left is typically used more often than the one at the bottom right, because it’s bigger. 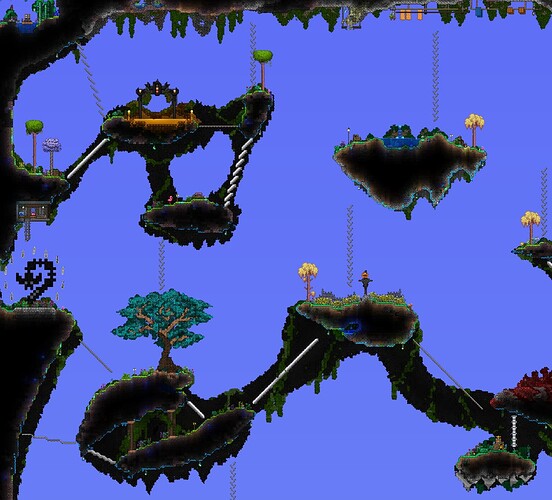 This area is the Fight Club of the DG arena. It’s where a majority of flights between novice, intermediate and veteran PvPers take place. It has everything a PvPer could ask for, that being islands to navigate around, large open areas, a decent amount of hookable rails, a honey pond, and a bed area.

You know that this is where shit goes down when you see the Bat Hook Shrine. 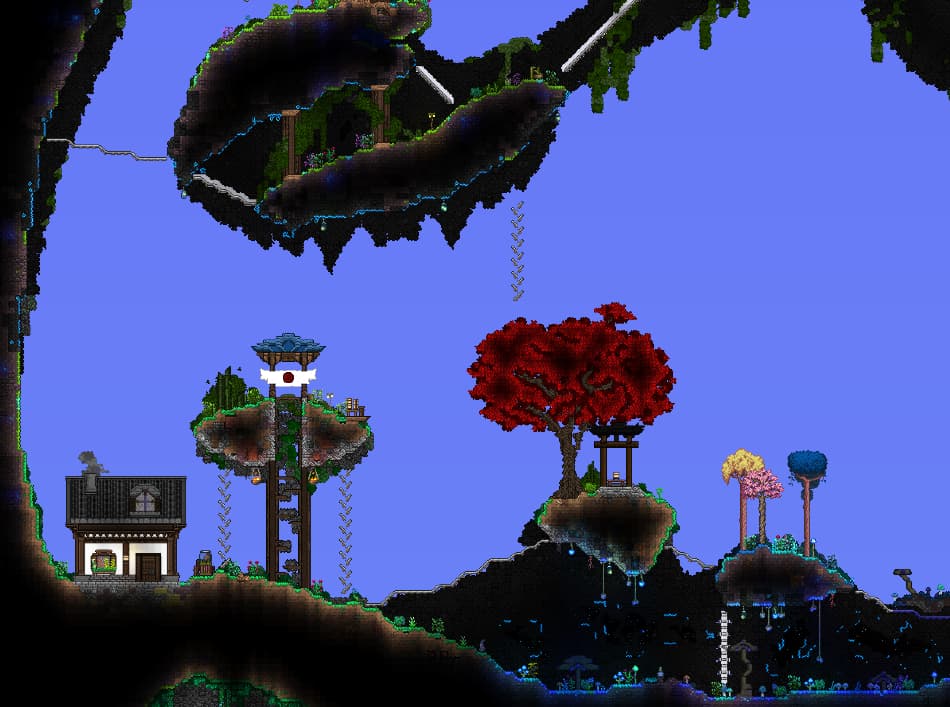 This area is the camper’s paradise. It’s isolated from the rest of the arena, but close enough to the top left to be a good hiding spot. There are also a lot of thin corridors and hard to get around structures 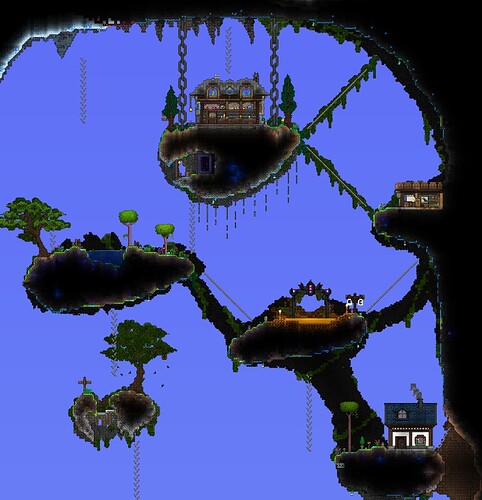 The right side is a less popular alternative to Fight Club, exclusively because there’s less islands to navigate around. People tend to just circle camp the bar island. The bar is also where a lot of peaceful loitering takes place. 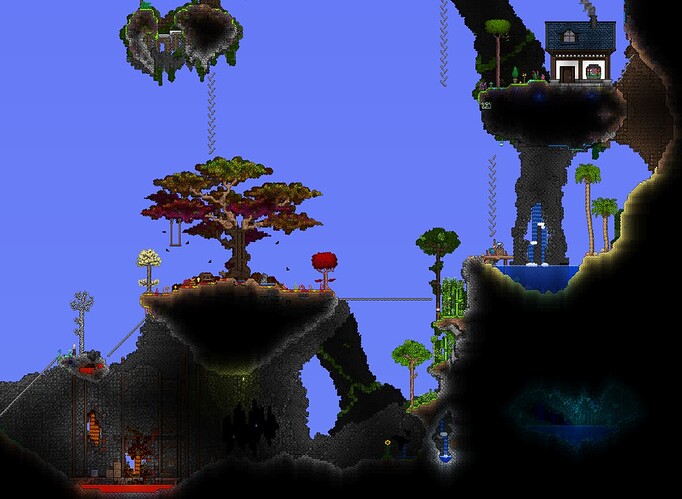 This area is the least used area in the arena. It’s dark in the cave, and there’s not too much going on structurally. Most of the time, fights that occur here only happen because a random is chased into this area.

You’d think this would be a great camping area because of how dark it is, but it’s not for two reasons. The first is that unlike the bottom left, there aren’t a lot of areas to hide behind. Second, it isn’t close to a popular fight area.

This is where the regeneration platform is, and it’s also the only area with cart-dashable rails, one next to the regen platform and one really hard to spot one at the bottom right in that shadowy cave.

You’d think that getting from the cart-dashable rail to the left side wouldn’t work because of the rail being in the way, but whenever you land on it, you don’t get stopped by the wall, you simply slide under it, keeping all of your speed.

Old FFA is an old version of the FFA arena, accessible through /warp oldffa. At some unspecified time which I do not know, this FFA arena was completely reworked into the early versions of the current arena.

There are a lot of similarities between this arena and the current FFA, like the placement of the honey pools, the house below spawn and the cave below it, and the bar island at the top left corner.

Additional Warp: /warp spectate (Warps you inside the box in the middle)

Autumn is a very typical dueling arena with an autumn theming. It’s moderately sized, with a large open area in the middle, and some thinner corridors around the edges of the arena. All but one set of rails are cart-dashable, that being the small corridor on the left side of the giant tree.

There is one honey pool included in the arena, one which is deep enough to be used as a hiding spot. There is also a home-y box inside one of the islands, which can be used as a spectator’s bench of sorts.

Additional Warp: /warp spectate2 (Warps you inside the box in the middle) 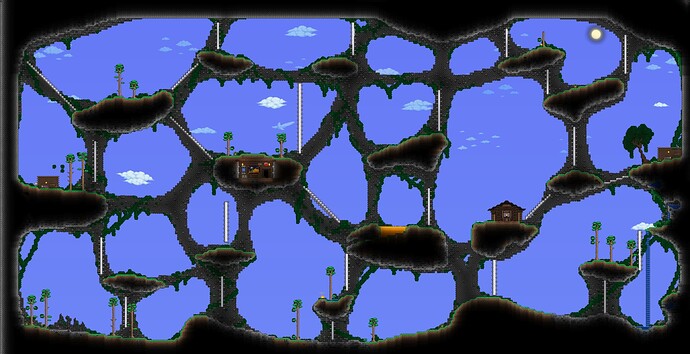 Forest is very similar to Autumn. The honey pool, beds, and spectator box are in the same areas. The main difference is the structure.

The islands are placed more evenly across the arena, which means there aren’t any large open areas, and there’s more condensed areas. This arena also doesn’t have the one cart-dashable rail that Autumn has.

Additional Warp: /warp spectate3 (Warps you inside the box in the middle) 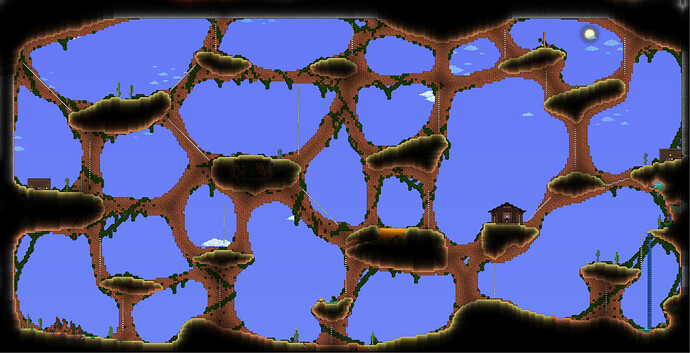 Desert is nearly identical to Forest structurally. All but one of the islands is identical, even the decoration is extremely similar. The biggest difference is that all of the rails are cart-dashable.

Also, this arena isn’t used in the Duel gamemode, but I may need confirmation on this.

As the name implies, this arena is an old dueling arena from an unspecified time period, and by unspecified, I mean I don’t know it.

Old Duel has a few interesting quirks. Structurally, it’s not that unique, aside from the large quantity of thin corridors. The honey pools, however, are quite unique. One of them is really small, only a 2x1 deep pool, while another is on top of some bubble blocks at the top of a thin corridor.

You can actually see some aspects of this arena’s design in the current arena, mainly the house, the cave area at the bottom left, and the tree island at the right side. 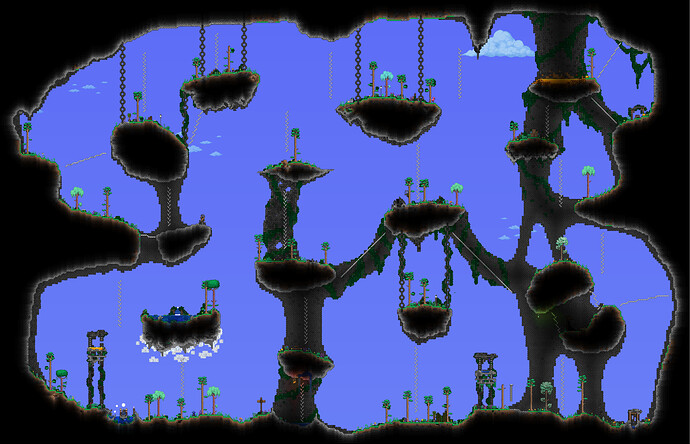 This arena is named the way it is because of the giant chains, go figure.

This arena is only really interesting structurally. It’s quite tall height-wise, but it’s also thinner than the other arenas. Aside from that, it’s rather typical. The 2 honey pools are in corners of the map, similar to the main arena, and one of them has cartdashable rails next to them.

This arena is a very gimmicky arena, made obvious by the giant volcano in the center with multiple entrances, including one in the water.

It’s arguable whether the gimmick behind this arena is good or not, considering how easy it is to camp inside the volcano, but it’s interesting nonetheless. 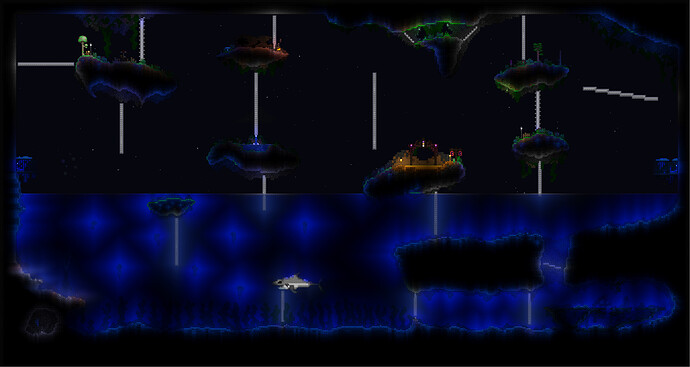 This is another gimmick arena, this time the gimmick is that it’s half submerged. Unlike Volcano, I am 100% certain this gimmick sucks, considering the limited movement and inability to access your Slime Mount while in the water.

The water is also quite dark, which can make it hard to spot people and easy to hide from people. I’m pretty sure this arena isn’t included in the duel gamemode, unlike Volcano, which is, please remove it.

At least some of the decorations are neat.

Honestly, this guide really isn’t that useful, I just wanted to showcase what goes down in the ffa arena and the lesser known duel arenas. Dueling is a good way to improve, so it’s definitely a good thing to know about these arenas.

Also, if I missed any accessible arenas or warps or whether an arena was in the duel gamemode, feel free to inform me about them.