Due to the 1.4.4 Update, several weapons, armors and accessories have been reworked. This, of course, will drastically affect the balance of DG PvP.

This thread will be a discussion thread for potential nerfs/buffs for weapons. I have compiled a doc of all changes that matter.

Weapon Changes That Matter Universal Change: Auto-Fire Option, all weapons that couldn’t auto-fire previously now can This is probably the biggest change out of the entire changelog, several non-autofire weapons will need to be changed Starfury...

Most Notable Changes (for meta weapons)
All weapons can now be auto-fire. This includes Sniper Rifle. All non-autofire weapons will need to be changed.
Bubble Gun has increased range and the projectiles last twice as long.
Starlight can now be buffed by gloves that increase size, increasing the range.

With the rework to True Night’s Edge, True Excalibur and Terra Blade providing substantial increases to their projectile size, they’re going to need to be heavily nerfed, but i feel Terra Blade’s massive, fast projectile may or may not be ban worthy.

Could the North Pole possibly be unbanned with the projectile spam and the spear itself now nerfed?

The projectile damage could be nerfed, which would essentially mean the North Pole was entirely nerfed.

All weapons can now be auto-fire.

I’ve updated my Changelog doc to include some of my thoughts on the new changes after testing them briefly. I’ll summarize my most important thoughts here:

Ice Sickle goes super far now.
True Night’s Edge and Horseman’s Blade stone you on use.
Terra Blade and True Excalibur do no damage.
Starlight Range Buff from Gloves seems scary, may need nerfing.
Flying Dragon fires way more projectiles with the usetime buff, should be nerfed.
Aqua Scepter can now hit off-screen, it’s basically a better Golden Shower now. Should be nerfed.
Spirit Flame is functional now, meaning that the worst weapon in DG PvP is Nebula Arcanum.
Unreal reforge on Stellar Tune has no noticeable impact.
Unreal on Nebula blaze does have an impact, however.
Bubble Gun goes much farther and lasts much longer, should be nerfed.
Morning Star fires as fast as Old Dark Harvest, and Dark Harvest fires faster than Kaleidoscope. Both need heavy nerfs.
New projectile from Chlorophyte Leaf gets owned by PvP Iframes, so it doesn’t work.
Tiki and Stardust Armor buff Whip range by 30% now, they give no defense, but Stardust Plate/Leggings may need to be banned, because 30% Whip Range on Stardust Armor is hella toxic.

Stardust Plate/Leggings may need to be banned

would this mean obsidian armor is unbanned due to massive nerfs, making it actually balanced? also, would tiki armor also suffer banning?

I’d suggest 25-50% reduced damage, including dmg caps. It shouldn’t be too bad, considering they both swing significantly faster now, but considering all the other weapon buffs and how good they would be (specifically talking about stuff like the massive autofire enablement, Shadowflame Hex Doll, Magic Dagger, Phantom Phoenix, Aqua Scepter, Bubble Gun, and Flairon), I see no point in nerfing whips overly much, especially considering the huge buffs to antirush weapons that would balance these changes pretty well.

What about tiki helmet?

Anyways both the flying dragon and chlrophyte saber is essentially got buffed when 1.4.4 came out so now they shoot faster. Also, the frostbrand finally got a speed buff
Also, waffle’s iron is nice, faster 1.3 christmas tree sword. 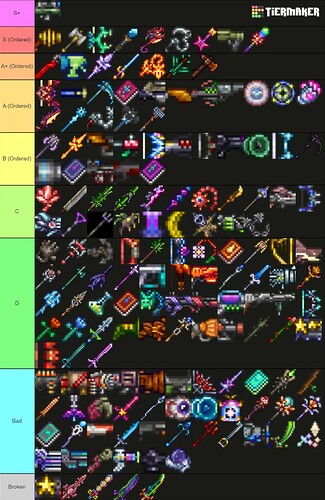 I have maade a first draft of my weapon tier list for 1.4.4. I’ll briefly go over the most important changes (subject to change on all of them):

Magic Missile is Mid-S tier and Rainbow Rod is Low S-Tier now. The addition of autofire on these weapons make them much stronger and able to dish out more damage.
Dark Harvest is Mid-S tier and Morningstar is A Tier now. Both of these weapons got insane usetime buffs and in the case of Dark Harvest, it can outdamage Paladin’s Hammer on mixed kits. Paladin’s Hammer is still higher because it’s better on Solar Flare Armor kits.
Aqua Scepter is High-A tier because of the insane range buff. Self-explanatory.
Venus Mangum and Chain Guillotines are C-Tier.
Three new weapons have entered the “broken” tier, all of them are melee weapons that got reworked.

Something is not right here!
Gungnir twisted the meta! It should be at least A tier.
(It does extremely high damage for a true-melee, outranges starlight, and has a projectile that actually works!)

Gungnir is a weapon that only works in close proximity and can’t be held out constantly to deal guaranteed damage like with starlight where you just flail it around.

it can easily be defeated with anti-rush weapons or literally any ranged weapon.

I would rank it mid B tier.

Dark Harvest/Morning Star is massively better than phammer now on whip-focused kits, which there are a lot of now because it is absolutely broken