This post is editable, or at least will be one second after it has been created. Please edit it if you want to add your own ideas. just dont like delete the entire post or smth

Tower Defense. That is all it is. If you know Bloons TD, it’s related to that, but also kind of different. Anyways, let’s get started on some core aspects of the game :

Someone built a castle and now team one has to defend it for some weird reason. Basically, it’s just a building. Its max health and its regen at the start of the game depends on the builder of the map. It’s also so rich that zombies are attracted to it more than players.

Like a boss health bar, there will be a health bar at the bottom of the screen displaying the health of the castle.

The lobby uses the same intermission that zombies uses. Here is an example of the info of the lobby :

If you want to get into the example above, contribute to this suggestion.
The lobby has a max of eight players. (Because there will be so many sentries)

There will be one command, two sub-commands, and one message that is given every five seconds for those who have not joined a team after 20 seconds after the lobby started being in intermission.

What death? It is impossible to die.

The following information only applies to Team One.
You can upgrade two types of things : The Castle or Sentries. To upgrade something, stand near it then use the lemon. Upgrading, for the Castle, increases its health and regen. For the defenses, it changes any of :

Possible errors while upgrading include :

The two teams have different goals. Team one is trying to defend the castle from the outside world. Team two is trying to raid the castle for glory. At least one person has to be on one team. If everybody except you has already picked only one team, you are forced onto the other.

The Impact of Too Many Players on a Single Team

If everyone joins team one, they get to spawn their own defenses. However,

So if you have seven players on Team One and one player on Team Two, team one sentries will do 1/5 of their normal damage.

If everyone joins team two, they get to spawn their own mobs. However,

It’s the same formula. If you have seven players on Team Two and one on Team One, mobs you place will only do 1/5 of the damage.

DO NOT go AFK. Going AFK in this gamemode is strictly prohibited for obvious reasons. Anyone who does this without the lobby’s permission and/or for boosting, they will be warned and kicked. If they refuse to stop, they will be banned.

Score is just like in Zombies. Something will display it (maybe that combat text or smth that mobile players can see too), and it can be used to buy stuff. EXCEPT, it’s not used to buy stuff, it’s used to make and upgrade stuff.

Your income is the score you earn per 30 seconds. Time is recorded in seconds, by the way.

So at the start of the game, you earn 2778 score. It increases exponentially.

This section is about the defenses for team one.

The players will start with some bad weapons which will not go up. This is only to defend from the early rounds when no robots have been summoned. Players also can’t die.

These defenses are different from the ability in Zombies because they are summoned differently and upgraded differently.

To summon a defense, you have to use an item. These items are assigned by the Map Builder.

To upgrade a defense, stand near it and try eating that lemon in your inventory.

This section is about the people who want to steal diamonds.

The players are ghosts (or at least look like them). They can fly and explore the map. All they are trying to do is send an army of mobs to destroy the castle. They also can’t take damage.

To summon a mob, you have to use an item. These items are assigned by the Map Builder.

Each player will have one of five ranks. Just Joined, Newbie, Apprentice, Expert, and Master. And to stop DP Boosting, they will have values of 1, 2, 3, 4, and 5. This won’t affect who you are with like in duel. It is just used to reward players with abilities for playing and to stop DP boosting.

Abilities but in Defend The Castle. I feel it had to be called different due to the change in the point of them existing. There will be some powerup that can only be selected on some team, and some that can only be selected on the other. And when you try to move to another team after selecting a powerup that is only on a certain team, it removes your powerup. Some powerups will require you to be a certain rank. Selecting powerups :
/powerup [powerup]

DP is rewarded every one minute.

Since the DamageDone variable is only used for the DP, it caps at 999. The max DP you can get per game is 450.

XP Is rewarded at the end of the game.

The other stuff of the other section.

No mob outside of the arena is allowed to spawn. If a mob escapes the arena, it will kill itself. A player can’t escape the arena because it will be teleported back into it whenever it goes outside the border.

One single map would be too boring, so like Zombies, it has its own map submission system!

Before submitting a map,

The map submission is basically just the zombies submission but without #3 because that is useless.

The class breakdown of the map must include :

DTC Managers and DTC Map builders (obviously the submission makers) handle the implementation of a map submission. The first few steps are simple. DTC Managers that have WEdit will move the maps from the build dimension over to the Defend The Castle dimension. The submitter will then run a whole bunch of commands (using the syntax that Tej posted) to implement the map content (other than the build of course) because why not.?

Setting the arena works like it would in zombies (though I am not a Zombies Manager so I don’t know how it works) except with a different modification. The modification is probably going to be dtc.

To select your map, use /arena select [arena name].

To set the mob spawn (where the offensive team’s mobs will come out of), use /set mobspawn in the place you want it to be. To unset it, use /unset mobspawn.

To set the Defensive Team’s spawn, use /set spawn B at the place you want it. To unset it, use /unset spawn B.

To set the Offensive Team’s spawn, use /set spawn R where you want it to be. To unset it, use /unset spawn R.
Error is “Element has already been set.”

Everything about implementing the offensive side.

Mobs & Assigning Items to Them

To Delete Mobs :
/dtcmob del {[mob name or ID]}
Error is : “Mob does not exist.”
Deleting the mob also deletes the item with it.

These were all the commands for the offensive side.

Everything about implementing the defensive side.

To set the health and regen for the Castle each tier :
/dtccastle settier {[tier, 0 for the beginning] [health] [regen per second] (cost, needed only if the tier is not 0)}
Errors include :

To modify a tier of the castle :
/dtccastle mod {[tier] [type] [value]}
Values include :

To delete a tier of the castle :
/dtccastle del {[tier]}
Errors are :

To add a defense, you must :

Defaults of the sentry :

The rest affect the items that the defense uses.

Reset resets all of the modifications to normal.

To delete a defense :
/dtcsentry del {[name] [tier]}
Errors include :

To delete them :
/dtcplayer delwep {item name or ID}
Errors include : “Item does not exist.”

Here is an example of a map submission that will contain everything needed in a submission (and extra). It will also be the first map to get into DtC if DtC is added.

#3.1 :
I permit someone else to take over ownership of my map and for it to be processed and setup without me if I am inactive or unavailable.

#3.2 :
I permit unauthorised edits by administrators/managers.

Castle :
Left side of the map.

Player :
Spawns in the castle.

Player Spawn :
Cave to the right.

Mob Spawn :
Same as above. 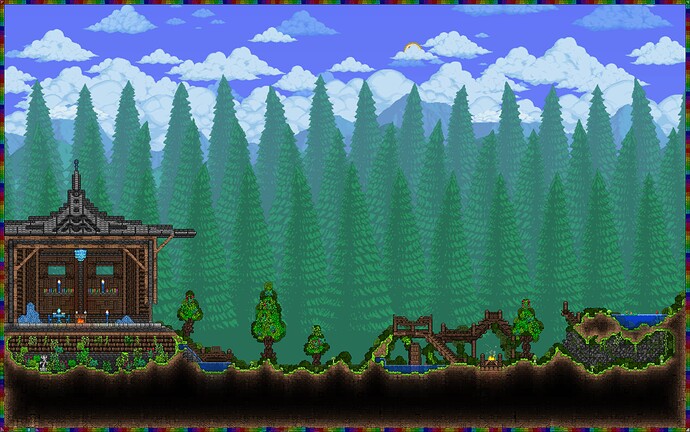 The defending side gets DP from time and time only, this could be a potential exploit for DP where the offender doesn’t spawn any enemies.

Even if this problem was fixed while still keeping the time thing, a team of defenders can still easily earn DP if they are against people that are bad at being offenders or people that exploit the anti-exploit to make it insanely easy for the defenders.

idk what to write

I think I fixed it.

What are ranks, exactly?

Maybe a section explaining ranks could be a nice addition

Also, I made some changes to the equations as well.

I have no idea if it’s balanced/functional or not.

Each player will have one of five ranks. Just Joined, Newbie, Apprentice, Expert, and Master. And to stop DP Boosting, they will have values of 1, 2, 3, 4, and 5. This won’t affect who you are with like in duel. It is just used to reward players with abilities for playing and to stop DP boosting.

Also, I made some changes to the equations as well.

I have no idea if it’s balanced/functional or not.

XP (Or at least in this gamemode) is just experience. The more time you are on, the more you should be rewarded with XP, so XP shouldn’t be influenced by the rank of the other team.

Edit :
Playing a full game with someone with rank Master gives you about .65 DP… And the more the castle health goes down, the more DP you get??? lol

Does anyone have permission to build?

Don’t all Crew have permission?

Not until build has been restarted

Wait a minute… How did you put a file more than a certain amount of file size in without it not letting you?

There are a surprising amount of cool compressor websites out there, and the lossiness and low quality doesn’t seem to affect the image too much.

Just scrolling through the forum and found this interesting concept. I play BTD6 so that clicked with me. But when you mentioned about Ranking System, I thought that’s actually good idea to have that in Zombies as well XD

Not sure how it will look, but anyway you get my vote

That would be cool, but I can’t belive how hard it’d be to do the health bar.