How do bans get onto the ban manager even when the mod only enters something like /ban add when banning people?

Ban Manager I’m guessing is linked to ban commands and when they’re executed.
When a ban is executed, the system detects and studies that ban and then displays the information of said ban.

It does this so fast that it’s why you see the Ban Manager link on the menu screen immediately after you get banned.

There’s two types of bans on ban manager: 1) the bans you see, 2) the TShock bans

The bans you see must be created on the ban manager, however, they don’t have any effect: they are purely visual

The ban manager doesn’t scan TShock bans and automatically creates a ban, a mod has to manually do it. My ban process is usually create a ban on ban manager and do a ban in-game, I think most other mods have a similar process making it appear ban manager is the one creating the bans. There’s edge cases though where we may have to rush a ban and put “pending” or similar as the reason

The bans on ban.dark-gaming.com
How are they made?

There’s a create ban button at the top of the ban manager page, used to create the ban link.

Fill in the information regarding the ban, then click Create Ban.

This creates the ban link, which you copy to paste under the TShock ban’s reason section. 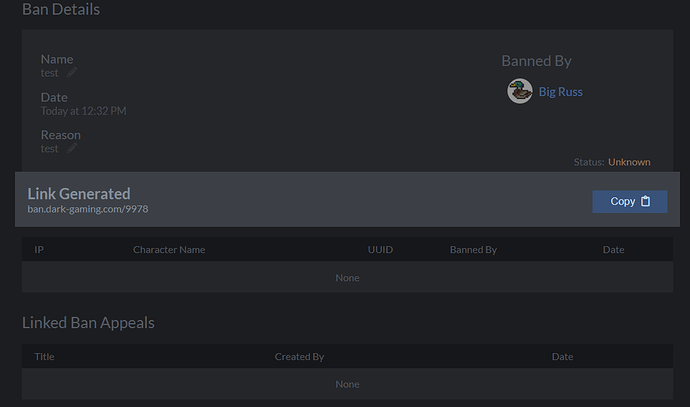 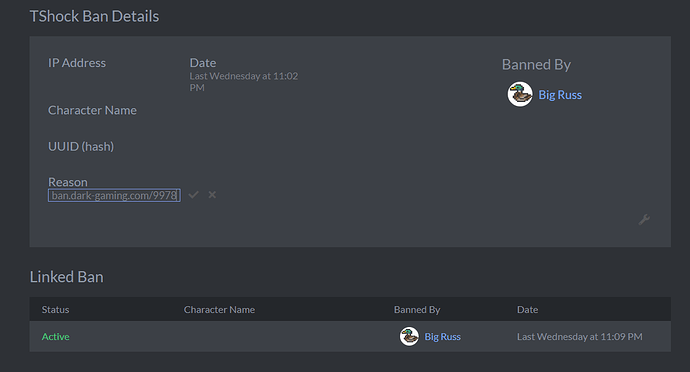 Then when they try to rejoin the server they will see their ban link.

Is the procedure the same if you ban via Phase ban? I mean: Translate|Link|Kick|Ban context menu.

Yes it is exactly the same, though I prefer not to use the preset ban settings on phase since it only bans IP, not including UUID or account (if applicable). I’ll show what mean.

Here is the preset option to ban via phase:

Notice how it only includes the IP.

I would rather manually type out the dimension-specific phase command as this will include UUID and the actual account as follows:

This is just personal preference, but I like to include as much data as possible to make it harder for someone to evade their ban.