About My Ban Appeal

[Q1] Provide the Ban link or if none, the reason
Link: Banned: Ban

[Q2] Did you break the rules knowingly?
Yes, I unfortunately did.

[Q3] Do you think your Ban was fair? If not, please provide a reason.
Yes, but I wasn’t harming any servers or having an unfair advantage, I was just trying to have fun without dying.

[Q4] Why should we unban you?
Because I Will change the Era of my ways being a hacker to a selfless honest and helpful player.

There’s a few things in this appeal that seem contradictory to me.

[Q2] Did you break the rules knowingly?
Yes, I unfortunately did.

If you were breaking the rules knowingly and claim that to be as “unfortunate” as you say, why did you decide to break them in the first place?

[Q3] Do you think your Ban was fair? If not, please provide a reason.
Yes, but I wasn’t harming any servers or having an unfair advantage, I was just trying to have fun without dying.

I believe that the main thing that is contradictory here is that you say you weren’t having an unfair advantage over other players that were following the rules; instead, you were just trying to have fun without dying. The only loss condition in a regular Zombies lobby is dying. Do you believe that not being able to die an unfair advantage?

Yes I believe that having not to die is an unfair advantage, but I still die from effects like poison or fire or something so it’s a very bad hack.

Also I hope you unban me sir moderator and peace out

Q2 is that I broke other rules from other games

Rules from other games/servers are irrelevant, unless they are other modes on the Dark Gaming Terraria server. It’s unlikely that they would end up carrying any weight in this server unless the offences are generally recognized (e.g. sexual language and racial slurs) between all games and modes.

Yes I believe that having not to die is an unfair advantage, but I still die from effects like poison or fire or something so it’s a very bad hack.

Only taking damage from debuffs and not conventional sources perfectly matches the behavior for godmode in every instance of usage of a modified/hacked client I’ve ever seen (i.e. all players I’ve seen using godmode through a modified client only take damage from debuffs). It does not matter that you’re not completely immortal. What matters is that, through using a modified client, you were gaining an unfair advantage at all, which is against the rules of the server. In the case of Zombies, where only a few enemies in the entire mode are capable of inflicting damaging debuffs, it’s even more of an unfair advantage. Even outside of Zombies, cheating can still serve as a massive advantage in any capacity; pulling endgame items out of thin air to skip progression. Moving at impossible speeds to dodge attacks and get around in general. Modifying weapons on your client to obliterate anything that might stand in your way. And in the problem cheat addressed in this ban appeal, godmode makes you nearly invincible, and thus, removes any sort of challenge that might be presented from… anything in this game. Being almost impossible to kill without needing to put in any effort should be at least somewhat self - explanatory as to why it’s not allowed.

but there only was one hack anyway

Yes, indeed. Do you understand why it’s not allowed on the server?

Yes yes I do, I understand now that God mode is bannable especially if it’s for fun or for ruining the server.

idk how to do it on mobile

Refer to the guide on how to quote the rules. The alternative method: 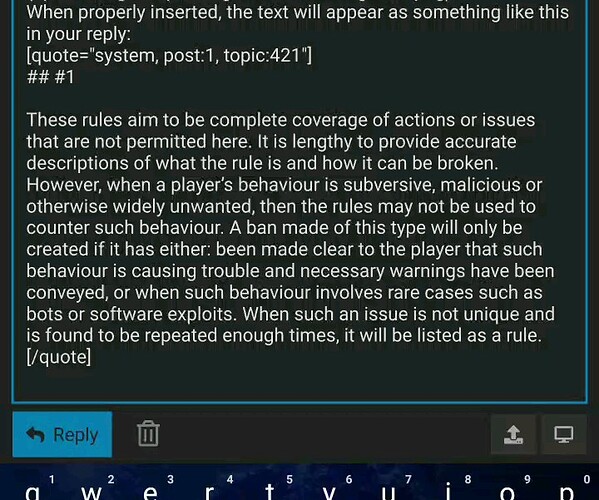 In the actual reply, it will appear similar to this:

To check that the rule was quoted correctly, you can use the preview button to see if it works (highlighted here in red): 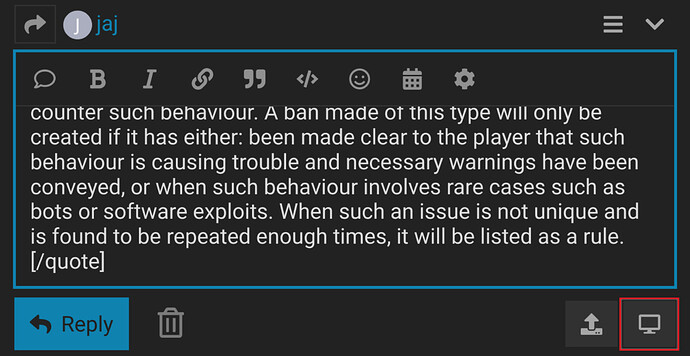 #2 Exploits
An exploit is unintended behaviour of the game that can be done without using third-party modifications (as that would be considered violation of S5#1). This also includes unintended behaviour of the server. The use of exploits is forbidden and punishable by a ban. It will be up to the discretion of staff to provide a warning instead, where an exploit has a minor impact.
I broke this rule

That is the correct rule, however, you copy/pasted them, not quoted them. Refer to my previous replies.