A General Guide to Zombie Survival

This is a guide to the overall play in Zombie Survival on the GameModes server. If you are the actual zombies in normal Terraria difficult, then unfortunately you might just not be very good at this game.

Firstly, it is important to know that sharing Score is one of the most effective things you can do in Zombies. This is especially important when you play certain roles. Here’s an example: On Hill House there’s two classes, Gun Slinger and Mage; with Mage, you can get the Aqua Scepter (highly recommended), which will grant you a lot of score. It is important to note that this amount of score is what you must share. If the Gun Slinger does not shoot, you can get maximum score out of the zombies and with sharing, you can quickly muster the greatest weapons. The Mage on this map quickly tails off as a healer with fairly low DPS. This is intentional. With all the score that gets put into the Gun Slinger, you should then be at a great position. While the Mage will not be able to tear through enemies, they are still a useful tool in ensuring teammates are at good health. Often other maps will have similar ways of gaining a lot of score for certain classes, and the same can be applied. Usually, classes without great score gain have greater weapons, with the difficulty dampened by another class giving score. For classes that tail off like mage, you can complement them with abilities that deal damage.

Secondly, it is important that you revive teammates. You may not think much of someone who is constantly dying, but if they are willing to listen, you can give them enough score to survive and eventually punch out a lot of damage. Regardless of skill, a teammate with good weapons will be a great asset in the later rounds. If you do not revive teammates, what happens is they either leave or perform worse and can become a detriment.

Thirdly, crowd control. In the earlier rounds, on some maps, you may find yourself unable to keep back the zombies. In these desperate times, you must jump. The best thing you can do for yourself and teammates in this time, especially if someone needs reviving, is to clump them up. If someone needs reviving, it is also important you kill as little as possible unless it is the end of the current rounds waves. If you kill too many and the next wave spawns, it will be harder to revive any teammates and all the clumping will be for nothing. To clump up zombies, you simply jump over them repeatedly and when you have 2 clumps on either side of you, let them come really close, and then jump over one. A single clump is a lot easier to manage especially when you are in danger as they act as a unit (as though they’re just one zombie).

Fourthly, damage. A lot of people who start to play will think that they must get the best weapons available as quickly as possible. And they think this means to upgrade whenever possible. Unfortunately, this is misleading. Once you get to a particular weapon that has low damage but high rate of fire, often something like boomstick (for Gun Slinger on Hill House), Minishark (Beach House) or even a shortsword (in the beginning rounds especially), you do not upgrade it unless it is absolutely necessary. But why? Because if you do, you will kill zombies more quickly. Remember that score is gained per hit, not per damage. The more hits per round you can do, the more score you gain in that round. Of course there is a point where it becomes min-maxing of score, so chase this at your own peril. The best way to achieve this is to use low damage but high fire rate weapons. It is important you upgrade your armor or buy defense accessories over all else to ensure survivability until you are better at avoiding damage. It is also important for anyone who is not particularly good yet, to get an alt weapon that has high damage in case of emergency. Once you get enough score, you can then proceed to max out everything. Doing it this way ensures you get the best tier of everything more quickly and at an earlier round.

Finally, if you follow the above, you should be able to consistently get to Round 10 at least. And with teammates all doing this, you should easily make Round 13+.

I am touched that my map was used in an example. It has grown up so fast ;-;

Not going to lie, hill house is probally the best of all the maps in my opinion, but back then, it was probally tied with Winter’s Scream, but that changed with the classes…

I think there was a bug in Monster Mansion, if you choose Consumer class they take your bones (Weapon)
and also in other maps a worm called “Milkyway Weaver” spawns and kills everybody.

@DerpDerp It was one of the first to be setup again for the new zombies.
@TonnageofDGThe Milkyway Weaver spawning is from “zombie” zombie lobbies. Those that have no real people in them, but are still increasing in rounds. It’s been hard to find out why. I still don’t know.

I think I saw these Milkyway Weavers at one point, it was a pest when I was playing with some fellow people…I’m a tad bit curious to find out why, and how this is spawning…

I did a bit of research from A Terraria Wiki
So here is a quote “Milkyway Weavers are flying worm-like enemies after defeating the Lunatic Cultist, near the Stardust Pillar. They are pretty much same as Crawltipedes, they will only target airborne players. Their body and tail are completely immune to damage, only head takes damage from hits.”
Your chance of hurting them is slim, so your best bet is just to dodge, it only targets air born players, so as long as you don’t use an item like rocket boots, and don’t jump a lot, you should be fine, but they will still be annoyance, it would be nice if they could help kill zombies :p, but that isn’t happening anytime soon, is it? Good luck in…dodging

Hello, but what is /li and how do you do mob despawn

Thanks, could you also tell me the name of this map? its sorta like ascension, but you can buy a gun and spear weapons. also tell em the names of all the zombies maps thanks

There’s a list of maps in-game(/lobby list), It also includes some unreleased maps, otherwise you can use this 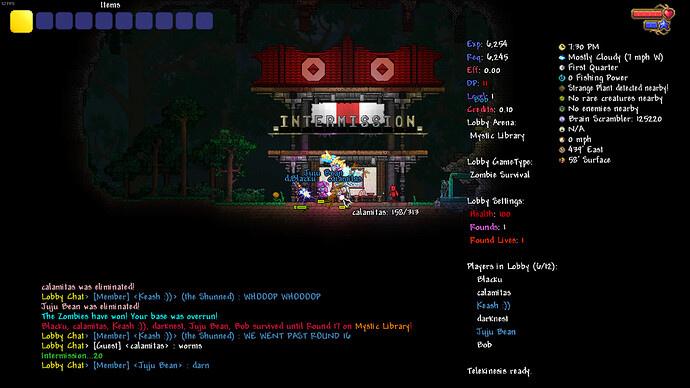 …This post was made four years ago, and is probably long outdated by now.