Prevent Lihzahrd Altar from being moved at all in Survival

Simply make the altar unbreakable, if that’s possible. After the fist time Golem is defeated, any idiot with a Picksaw can take it and stop progression for everyone else.

I have a problem with this though: A lot of people like being able to fight golem in places that aren’t the temple. I like doing it myself.

There might be another solution though. For instance, maybe make it so that there are 2 altars, one movable, and one permanently in the temple.

In the end, stealing the one that is movable would still be against the rules, and so both sides would be happy. Or, if it is an option, you could make a golem altar part of the loot bag instead of making 1 that is movable. Then everyone would be able to spawn golem wherever they want to.

There’s been an issue where late-game when the world regenerates, people can and will just get to the Lihzahrd Temple and break in, then take the altar with them and leave. This causes issues for people later on who wishes to refight the Golem and had to go through the effort of killing Plantera, just to find that some random person decided to steal the altar needed and had left with it inside their inventory.

you could make a golem altar part of the loot bag

There is an intentional loot table by Terraria (like the 400 mana limit) which cannot be changed for everyone and Survival TrueSSC 1.5.1 has many problems with lootbags.

Also there should be a rule against the stealing of progress relevant items (text proposal):

Anyone who blocks the progress by preventing the lunatic cultists to spawn or stealing the lihzahrd altar and similar ways will be punished.

The punishment I leave up to staff, it can be:

or perhaps add a free lihzahrd altar at the spawn? well, on top of the spawn region, but still inside the region like in the picture 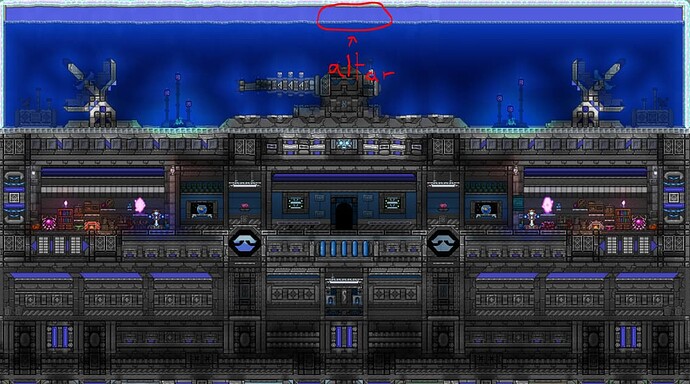 yeah that could work. I vaguely remember there was one there before the new spawn

i couldn’t place it there so i improvised 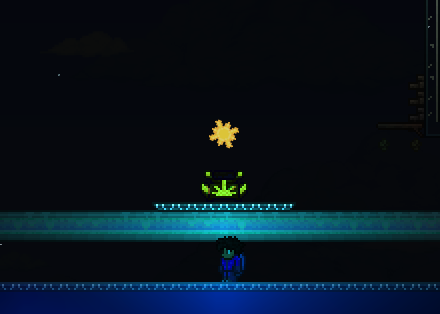 #7 Bosses: The spawn area is not to be used for boss fights. Any bosses being fought at spawn can and most likely will be despawned without loot drops

Another reason for this is because bosses tend to get loose and kill everyone in spawn repeatedly, as well as most of the npc’s nearby. It should be considered griefing when players unleash bosses just to mirror back to spawn and lead them there, or intentionally spawn additional ones while everyone else is trying to take down the first one. Fighting bosses anywhere on the spawn island is just a bad idea.

The first run on Golem has to be in the temple anyway since no one has a pick strong enough to break the temple blocks. I’ve seen at least one way around this with a lot of actuator blocks and kiting him out. After the first successful kill, the area around the altar can be expanded without any need to break and move it. Locking it down is the only way to guarantee some moron can’t just take it out of ignorance or thinking they somehow have a right to it.

Fighting bosses anywhere on the spawn island is just a bad idea.

The spawn area is not to be used for boss fights. Any bosses being fought at spawn can and most likely will be despawned without loot drops.

The spawn area is not to be used for boss fights. Any bosses being fought at spawn can and most likely will be despawned without loot drops.

I believe the rule needs clarification. The rule itself doesn’t state it is forbidden, only warning that it may be despawned

It does both. “The spawn area is not to be used for boss fights.” it pretty clear if you read that part by itself. The second part is a warning of what can happen if a boss makes it to spawn. Otherwise, if nothing in that rule is forbidden, then how can it be enforced?

I agree, but in several weeks of playing survival nearly every day I’ve never seen it enforced or even mentioned in chat. EoC is one of several that just spawn on their own and inevitably go to where most of the players are hanging out. We usually end up fighting bosses in and around spawn out of simple necessity, otherwise they just camp the entrance and spawnkill everyone until they either despawn, or chase someone elsewhere, which is why the top of spawn mentioned above is a fairly popular boss fight area if there aren’t a lot of houses/blocks in the way.

I don’t see a way to actually enforce the rule unless someone is intentionally spawning bosses like Plantera and Queen Bee for teh lulz to watch the chaos and carnage and brag about it in chat.

Which gets to the core of the problem with Golem: should admins allow anyone to do anything they want with a Golem altar, or impose some order and lock it down to the temple? Is that even possible in coding terms?

I have an idea: How about a respawning Lihzahrd Altar? It’d probably be a bit harder to implement but the premise of this is that if you break the altar, a new one appears about two minutes afterwards. They don’t even sell for much, just sells for 60 copper by default. This solves all the problems: you won’t be forced to fight the Golem at spawn, it won’t be locked to the jungle temple either so it could be made accessible to the whole playerbase by having it placed near a warp (ocean warps are most commonly used in this situation,) and having it be stolen won’t be much of an issue.

The way this would maybe work is that at the start of the run, the server detects the position of the Lihzahrd Altar and then every two minutes, a new altar is placed at that exact position, replacing the old one if it had not been taken.

Of course, this would break if the world seed were to be changed in the middle of a run, but I doubt there’s any real reason to do that.

Agreed, that would solve both problems if code will allow it. I don’t actually have a problem with fighting Golem elsewhere, just with ppl taking it for themselves and screwing everyone else.