If I had a character named NoobGamer69(example name), I logged In and played on survival, did a ban-able thing so I got banned ofc. Then the next day I renamed my character to GodGamer96(very creative) , then I just got in like normal.

Is that normal…or just utter unjustice?!

That is Ban evading

I would say that there isn’ an exact rule to that, but i think that should be obvious that if you got banned its because you shouldn’t enter, because… That its the point of bans, the ban it suposed to doesn’t allow you to enter…

Also, aside from that

This can be also added, to make 2 Ruke breakes

Do not do it unless you want to get permabanned, or be chased by the staff

No no no I am not that petty… I just read a hilarious ban appeal who complains that he was banned for no reason BUT at the end he said that “his other account was banned and renamed it and was able to enter in like normal” but then times after that he got banned again. So i thought if that is ok, Im just askin

I already thought of this strategy but i wouldnt call it a strategy though, its kinda childish and very unjust.

You can actually see that dudes ban appeal, i think he posted it a while ago 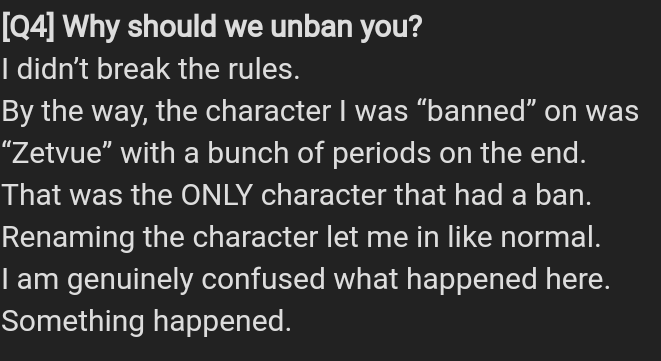 (Im posting a part of someone elses Ban Appeal, if this is illegal please take it down or inform me and ill take it down myself)

This is an exception because the user got the infamous Jr’s ban (4847) because having many repeated characters (like Waaaaaaa or lex333333).

Given the description of the user from the appeal in question, I think it’s just another case of Jr’s ban triggering false positives. 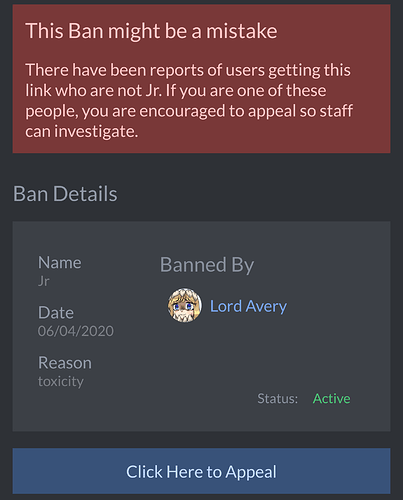 Important takeaway from the ban link: “There have been reports of users getting this link who are not Jr.” I don’t know specifically why, but after other users in the Dark Gaming Discord did testing back when the issue was new, it was found out that if you joined the server with a character that has a name with more than 4 consecutive characters, you would receive Jr’s ban link and be kicked from the server upon attempting to enter any Dimension. You wouldn’t actually be banned, though, and the only workaround would be to rename your character that you intend to use on the server.

By the way, the character I was “banned” on was “Zetvue” with a bunch of periods on the end.
That was the ONLY character that had a ban. Renaming the character let me in like normal.

Referring back to the appellent’s ban appeal, the character name they were likely “banned” on was along the lines of “Zetvue........”, though the exact number of periods present in the name can’t be determined without screenshots. However, it must have been greater than 4, which triggered the false positive.

Scary thing is, there’s nothing odd about the ban. It has an IP, a character name but no UUID, though multiple other bans have no UUID but it does not happen

OH now I understand, thanks for clarifying em up for me.

Funny thing is, his ban appeal still wasnt given attention to.

why hasn’t this bug been fixed yet?

AIDAN MY MAN!!! HOLA SIGNORE!~ Hows your day sir?! Are you having FUN playing Terraria? I myself am HAVING FUN playing Terraria. But since were both BANNED, lets have a competition to whoever gets the most badges before they get their ban lifted wins…

Our battle will be LEGENDAREE!!

Er… Sadly by experience, most of people never returns to the forum once they get unbanned…

A-are you tryna say that we will never ever ever getting unbanned for the rest of our minutes left in our life?

Man, I think I am all of the above!!! HAHAHAHA

No bro you forgot somethin!!!

WHAT about THE MEMES?

Have you ever been chased?

Except by the admins

Chased by what specifically?