How do I play survival?

I am a member, and i am in the game, but I don’t know how to play like how to get a house, get items and do anything else. Could someone educate me on how to play?

Survival on Dark Gaming isn’t entirely vanilla, as a starter. There’s lots of things there adjusted to fit lots and lots of players. To answer your initial first 2 questions:

how to get a house

With the exception of the spawn platform, the world resets every 12 hours, commonly referred to by players as “world regen.” Every 12 hours, when the regeneration occurs, what I believe happens is that the world is reset to its initial state, allowing for more items to be obtained from the world as well as for progression to begin anew, but all players keep their items. As a result, structures are wiped when this happens, except for on the spawn platform, and to claim on the spawn platform, you as a player need to register for Crew. Instructions can be found in the Dark Gaming Discord server by running the command !crew, preferably in the channel #bot-n-spam.
Fun tidbit, here’s my house the one reset I played Survival. 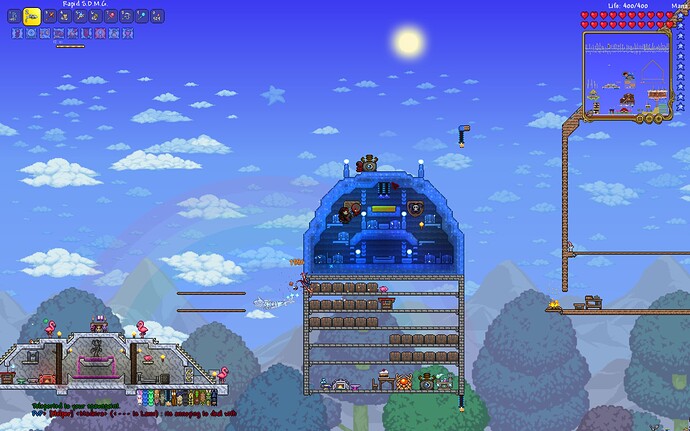 This is where the vanilla game comes into play. On Survival, you gain items through simply playing Terraria normally, going through progression, hunting for shinies in nuggets of ores and treasure, and taking down bosses before continuing the hunt. The major difference between a simple playthrough and DG Survival in that regard is that, especially early on in a weekly reset (Survival fully resets weekly to keep things fresh), you’ll be accompanied in play by lots of other players, and by working together, all of you can reap the rewards. Interact with others through text chat for any number of reasons, be it putting out an offer to purchase items or trade, or give away some spare items to others who ask to help them get started on progression if they joined late.

Those are the absolute basics, but for a few other things:

I’m not the most knowledgeable on Survival (if anything, Zombies is more my area of expertise), so if you have other questions, reach out and ask!

how to get a house

You need to have crew in order to make a house. The command for making a protected house is: /house define [name of your house]. You will have to mark the top left and bottom right corners of your house by hitting them with a pickaxe in order.

Tip: Make a box made out of dirt or any block you have in your inventory, make the house protected and then start decorating and building it.

Also, you’ll have to contribute to the bossfights (hit them) to get boss treasure bags and explore the world to get loot. Use warps to your advantage (you can see all the warps via /warp list) to grab loot or ore that people have not yet explored.

Be nice to others and help others out whenever you can. That way you can also gain the help and trust of others.

Also, fishing is an option. It’s kinda boring though, and if you don’t wanna grind or fish just go Yo-Yo class. It’s fun and has a bunch of non-grindy equipment while still being relatively powerful.