As the banlink says, you were banned for using a modified client.
I deemed the items in your inventory impossible to obtain normally in the timeframe you spent on this server, so I banned you for using a modified client. Standing out most notably would be over 600 bars of luminite and over 700 stardust fragments (not including crafted items). You also have empress of light items despite drop logs not showing that you opened such a bag. And empress of light summoning is bugged in survival so summoning it is very difficult. 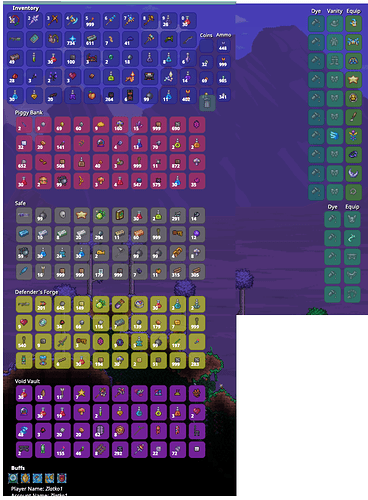 [Q4] Why should we unban you?
im new and like the game, one thing i noticed though is i had a bufferoverflow message everytime i try and load survival withough waiting for the game to catch up, this has only been like this for 2 days, and might be why i was banned. I have no altered account or information or anything like that its a slow read/write issue with my comp and affects most games at somepoint. The read/write speed goes as low as 1 kbps, 5 kbps then back up to 30 mbps. I am almost certain this has caused the error, its the only new game affecting thing that seems like a serious problem, a few games i cant sign into, other times i have to wait a bit before proceeding with an exchange or it bugs out

Everything is held in memory after loading your player and the world file, so read/write speed would not affect ingame performance nor should it affect your ingame items. If it was changing data, your player file would be corrupted. But your data is stored on the server, not your computer, so read/write speed is irrelevant here. The “bufferoverflow” message is just a server-side bug that is a de-sync that kicks people rarely. It does not trigger any automatic bans or anticheat, nor is it the cause of your ban.

I initially obtained lots of stuff i needed from charity, then once i got my picksaw (I traded 3 platinum coins from defeated moon lord) i also found 700 luminite bars i the bin. Once i got my picksaw mining was done at sprinting speed so i collected lots of junk, also mining out all the gold from hell. The thing that gave my infinite fly i traded for aswell. When i was mining with picksaw i would get easily 5 crystal hearts per min.

Also its a HDD error and definently can cause an error in a match because its still doing it at the moment. It went buffer overflow when i tried to enter surival, this has only happened for a few days. I think its the reason for modified client message. I have super terraria world installed, but use normal shortcut to join game.

While at the start of logging in at the place (/rift). All the chat seems to freeze for a few seconds after i spawn, if i enter surival mode at that time i get a buffeer overflow message and am kicked from the game. So i have about 4 seconds of chat time freeze where if i go enter survival mode i get kicked for buffer overflow. Im certain this is the same issue related to (modified client) slow HDD read/write issue. It also stopped me playing conquerers blade if i dont wait several minitues after it starts for the game to become ready to play it will always drop with an error

please let me know what you need me to do because i know i havnt done anything wrong or illegal. Still completely innocent\

If possible i could show you the error when i load survival, if i get a chance to.

The person i remember who i traded the picksaw with was Aquatic (scourge?) first name part aquatic. it was off of his friend in chat that i got the ‘infinite fly’ accessory traded for

Also i have Super Terraria World Installed but i dont use the shortcut, i start normal game normally through steam. What else can cause modified client? I have done nothing at all wrong

What could of caused the message modified client in survival?? Is there anyway that this can happen as i have not cheated so far.

I find this to be quite unlikely.
You have an ancient chisel equipped, which can only be obtained via desert chests however you have absolutely 0 desert items in your inventory.

When i was mining with picksaw i would get easily 5 crystal hearts per min.

Also, coincidentally, you happen to have seven HUNDRED stardust fragments. - add 110 you used for the weapons and armor and that’s over 840 fragments. The reset was on Friday, and I find it very strange that you or “someone else” managed to do 21 (at the minimum) stardust pillars when you guys were at golem/cultist earlier on yesterday. Same goes for the Obsidian Skin potions - 28 with the buff active. Clearly it was stacked to 30.

And 547 cobalt ore? Even if that was possible to get why would you mine 547 cobalt this late into the game?

Also i have Super Terraria World Installed but i dont use the shortcut, i start normal game normally through steam. What else can cause modified client? I have done nothing at all wrong

You didn’t get kicked automatically, you were banned because you modded in items. It has nothing to do with the server detecting that you have Super Terraria World installed. It mas a manual ban.

So i have about 4 seconds of chat time freeze where if i go enter survival mode i get kicked for buffer overflow.

This is a common error. Happens to me often too. A relog seems to solve it. Your HDD read/write speed is not related whatsoever. All you need to know is that you cheated in items and got punished for it.

If you’re telling the truth and you somehow managed to get all that loot that is in once again a coincidentally high number close to the maximum stack for the item, then I apologize. For now, though, it seems that the chance of you hacking the items in is roaringly higher than the chance of you obtaining them legitimately.

I have never cheated in this game or added in items, the stuff in there is almost entirely just junk i found, the luminite and star dust were found in bin, please unban my account, i really want to play but probably cant convince you that i have never duped items in or anything illegal.

I bought the game only a few weeks ago with the intent not to cheat but to play online honestly and heed any advice i recieve. Check my steam account if you must which would show i purchased the game. I dont cheat or would have done something as careless as cheat on a game i just purchased after years observing it. I wouldnt cheat in a game i just bought, if i really wanted to cheat, i wouldnt of bought the game.

Even if you didn’t cheat items in, holding on to these cheated items knowing very well they were cheated in is just as bad.

There was no notification that any of the items i posses were cheated it. They were give to charity.

Hoping you will reactivate my account, still no word on modified client. (have done nothing to make this occur)

So you just assumed that someone earned a full stack of Luminite and Stardust frags legitimately and decided to use them?

Didnt know the game had lots of cheaters, people would always leave tons of loot for charity if they are high level.

I remeber on the day i got it, there were 5 players running around with full luminite armour.

Please someone state what the issue is clearly so i can deal with it.

Is there anyway i can show or prove that i have never used a modified client? a screenshot or something like that?

Do you mean i have too many items from others? maybe you can reset my character and items and let me back in server.

Use of modified clients, or items that were obtained illegitimately (in this case, quite clearly given the quantities) are not allowed. Can you find in the rules the rules that concern you in this case and make it clear you know what should not be done in circumstances similar to these? Rules: Dark Gaming - Terraria Server Rules

Is there anything i can do like a character reset?

So i can can on the server?

Can you find in the rules the rules that concern you in this case and make it clear you know what should not be done in circumstances similar to these? Rules: Dark Gaming - Terraria Server Rules

As a reminder, your ban reason is use of a modified client in Survival. Read over the entirety of the rules and find whatever you believe applies to you here, and explain why such rules are in place.

Ok i have a modified client because i have STW installed, apart from that i have a few gifted items from players on the server.

Can you find in the rules the rules that concern you in this case and make it clear you know what should not be done in circumstances similar to these? Rules: Dark Gaming - Terraria Server Rules

As a reminder, your ban reason is use of a modified client in Survival. Read over the entirety of the rules and find whatever you believe applies to you here, and explain why such rules are in place.

Again, you could read over the rules as directed by @Tru3thful and me previously?