[Q2] Did you break the rules knowingly?
i didn’t know i broke any rules

[Q3] Do you think your Ban was fair? If not, please provide a reason.
it wasn’t fair because i didn’t use a modified client in survival i was on survival helping people with cultist

[Q4] Why should we unban you?
i just like to use the server for testing purposes and playing with people on survival i don’t hack or anything

If that’s the case, can you explain where the highly unlikely items you’re in possession of came from, when there’s a blatant lack of progression towards nearly all of them? 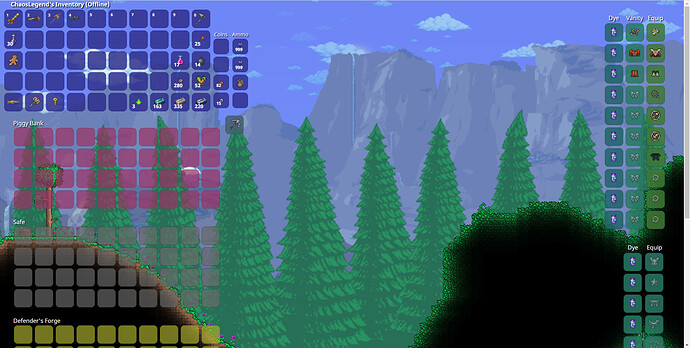 That doesn’t resolve anything. Hacker or not hacker, the bins are a very easy and common excuse you could play your card on. Not only that, but items in the bins, especially in the amount you claim to have gotten, are very likely to be hacked in by another player, both of those being against the rules if you are found in possession of them. There’s not much of a way to prove your innocence or your guilt in this case, so I’ll just move on.

You claimed those items to be from the bin, so I’ll ask you to read the rules from here, and copy and paste/quote the exact rule you have broken, regarding those said item drops.

Yes. As I stated before, items that are incredibly high in bulk(in your case, the bars, life fruit, and dyes) are most likely hacked items. Being aware of that, I’ll be asking you to remove those bars, fruits, and dye from your inventory. I wont ask you to remove absolutely everything, but the point stands that any items in the bins that seem “too good to be true” should not be kept. With that being said, this appeal is accepted, and your ban has been lifted. It’s also noteworthy to keep in mind that if you are banned for the same reason, it is highly unlikely that the appeal process will go as smoothly, on the considerably low chance that a second appeal is considered at all.