Also, looking at other ban appeals, I know you might want the reason, so here you go!

Griefing is the removal/addition of blocks to another player’s structure without their permission to do so. Griefing is punishable by no other than a ban and will not expire. Protection is irrelevant in all cases of grief. It is only there to avoid having others break this rule. Section 2 - Griefing

You need to follow the format (some things are italicized when they were meant to be bold.)
Do not post a new appeal; edit your existing one. Post a reply here once you have made the corrections.

I am confused on what you mean. I am very confused onto what your saying. Could you go into that a little further so I can understand it?

You may have removed an asterisk from Q2 and Q4

I think I updated it

Well, I didn’t know it was a rule.

Figure A. These were the messages you sent at the time. You even accused someone else of doing it 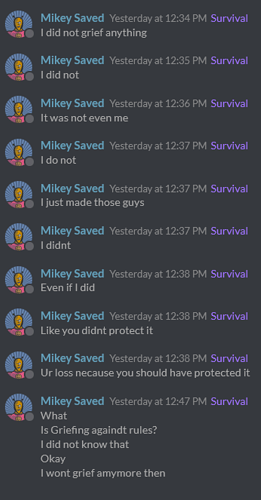 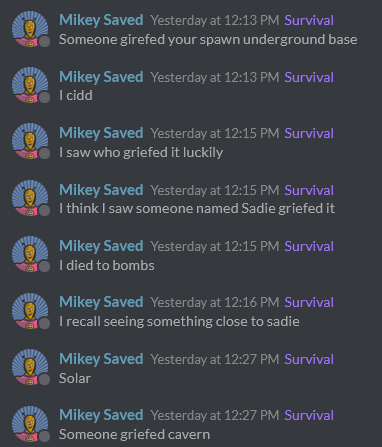 Figure B. This was the building you griefed, and reportedly you also griefed a farm elsewhere (although I do not have a screenshot of that…) 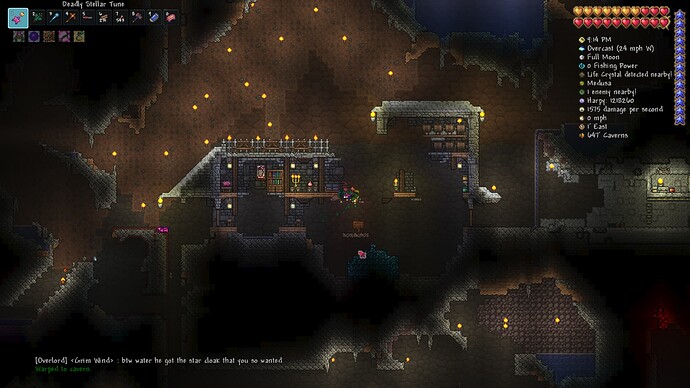 Figure C. This was your inventory, until Water Bottle called it out and you deleted the materials encircled, as well as the bombs (there’s some stuff in it that I noticed he didn’t encircle and you didn’t delete.) 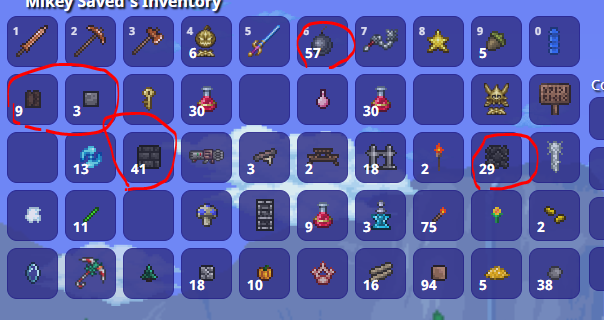 Figure D. Chat messages with the builder of the griefed build backing that up:

Figure E. Your inventory after you deleted the materials: 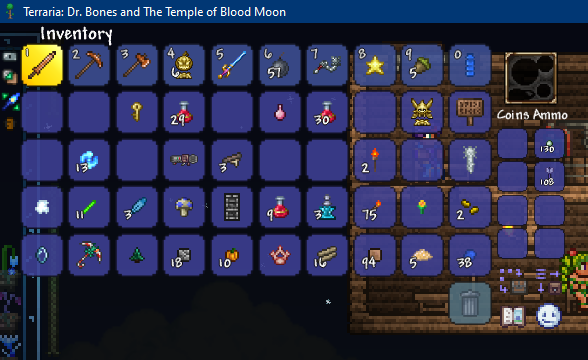 The proof that you were lying in your messages pretending that you didn’t do it is a presence of the griefed materials in your inventory, as well as bombs, not to mention that you only had copper tools. Those materials, luckily except for the tiki torches and probably the shelves and door, were suspiciously deleted after you were called out.

You cannot “know it wasn’t against the rules” and “proceed to cover up your tracks” simultaneously. If you truly did not know it wasn’t acceptable, you wouldn’t have deleted them as soon as someone pointed it out in the first place. Except you did, and you even pretended you didn’t do it, as well as accused someone else of having done it. This invalidates you claims of being unaware of the rules.

tl:dr you say you didn’t know but your actions prove otherwise?

The only thing that actually could have been a little more fair was for me to JUST be banned in survival, not everything.

If you were banned only from Survival, there’s a chance you probably would have just proceeded to grief in Build instead, or sabotage Zombies lobbies. We wouldn’t know, and it’s better if less damage was done so that’s why you were banned from the whole server instead.

If your wondering, WHAT THE HECK IS THIS ANSWER ITS BLATANT

You do realize that not everybody is the same as you right? You do know that there are people who legitimately come into the server to cheat while being well-aware that they shouldn’t?

usually, the survival servers I play allow griefing on them.

I’d like to point out that in a previous iteration of your appeal, you mentioned Minecraft servers.

Last time I checked most regular Minecraft survival servers also banned griefing, so why else would you go specifically to ones that allowed it other than to be able to grief stuff at all? There’s no doubt you did also do some griefing in those ones since it was allowed. This points toward your intent.

Okay, sit back and relax, this is going to be a long one.

Alright, so the first one, Figure A. Now, the only thing I am going to mainly answer here is that the “Sadie” figure I said that I thought did it did not even exist. I didn’t blame anyone else because it would be toxic and I’m not going to go THAT far.

Now, I was denying at the time because I wanted to hide my secret. I didn’t know at the time that it was against the rules though so I didn’t hesitate to have a bit of fun, although things went a little downhill from here.

This is basically what you see, when someone called it out, I cleared it hiding my tracks, yet I still did not know it was a rule at this time of the issue. I did not even know you could “inspect” inventory’s like that.

That’s pretty much standard among servers. It makes no sense to me that someone gets banned for modified client, but only in the Zombies dimension, and are free to continue modifying their game in other dimensions like Survival or PvP only to get banned from those after, so instead of that they should just be banned from the server itself; it guarantees that they know they’re banned and that they can’t continue to cause harm. It’s the same thing for all rules, that’s why you get banned from the entire server instead of just sections.

Griefing is the removal/addition of blocks to another player’s structure without their permission to do so. Griefing is punishable by no other than a ban and will not expire. Protection is irrelevant in all cases of grief. It is only there to avoid having others break this rule.
[/quote]

Although you did get the right content, that doesn’t appear to be a proper quote. You left something out…

Can you try to make it clear by any chance?

You can see that it’s formatted in a way where a gray textbox appears alongside an arrow that opens the post it’s from. However, yours doesn’t.

Invisi, I am on mobile. I am trying to do that and it just doesn’t work for mobile people. Sorry about that.

I see. Put this line unto your incomplete quote them.
[quote="system, post:1, topic:421"]
Place it before the text.

It’s saying I need more then ten characters too so I am adding them here.

2- Yes, I understand how I will not break them again, I have read the rules multiple times now and those days are now behind me. I could also just NOT play on survival too.

3- Yes, I promise on my life I will not break them again.

4- I understand that fully.