Allow First Fractal to Show in the Inventory Viewer

There’s been quite a few players who were banned in the past for wielding First Fractal, I even ran into one myself earlier today. However, there lies a problem: sometimes, gathering footage to document and then properly report the player in question can be a bit of a trouble. Take for example, the clip I used to report the player I mentioned during “earlier today”. Here’s what it looks like:

Yeah, kind of hard to catch, right? The easier solution would just to be to see if they had the item. Except… you can’t. Here was the inventory of the player in question shortly after I recorded the clip, and before I filed the report in the Dark Gaming Discord: 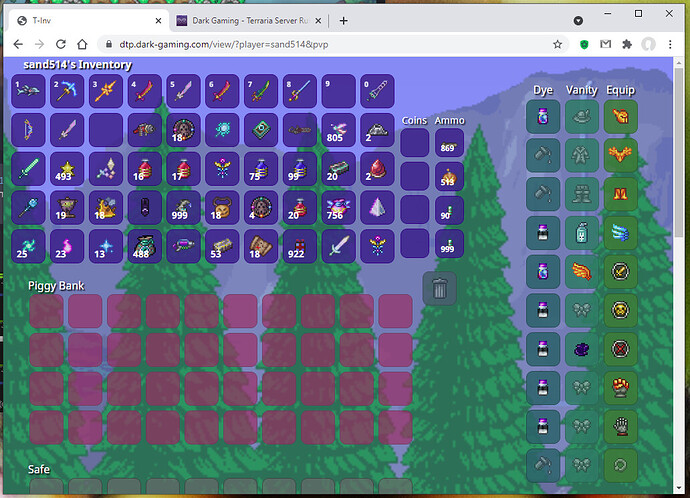 image1032×745 256 KB
No First Fractal is shown anywhere, but there’s an empty hotbar slot that would very likely have been holding it. As a result, it would be easier to just be able to screenshot the inventory of the offending players, provided that First Fractal could show there.
Invisi 14 September 2021 04:58 #2

I do agree with this, and at the same time Health and Mana should also be shown too (which has been suggested by Madofado and Legolas#1…)

Also, it’s probably not possible, but if it is, maybe a way to tell that an item is modified in T-inv aswell? It would really help.

Pvp Manager has an entry for the first fractal projectile (857) PvP Manager. So maybe ban that projectile?

I’m against banning that projectile. The projectile does little to no damage in the first place, so it won’t have an effect on PvP. Plus makes their users easier to catch (I don’t recall a swing animation for First Fractal anyway…)

To use a First Fractal in the first place you would need to have a modified client as the game is programmed to immediately delete it as soon as it’s detected. It’s the fact that their users are using a hacked client that counts.

So maybe ban that projectile?

As Invisi stated, it’s not the projectile that’s the problem, it’s that in order to possess, never mind even wield First Fractal at all, you have to use a modified client, as the base game of Terraria doesn’t enable users to save First Fractal into their inventory. According to the Terraria wiki page on the First Fractal,

If the First Fractal is added to a character’s inventory/research menu using inventory editors or similar methods, it will disappear. This can be prevented by overriding Terraria’s automatic removal of deprecated items, in which case it can be used normally on both single player and multiplayer. If then deposited into a storage item or thrown onto the ground, it disappears.

Key words: overriding Terraria’s automatic removal of deprecated items. This is impossible to do within the vanilla game, and the vanilla game alone; to see anyone do it is a dead giveaway that they are using a modified client, which is against the rules:

All types of modified clients that deviate gameplay functionally in any way from the original Terraria client is forbidden; this also includes using 3rd party programs, such as Inventory Editors, to modify your character to possess impossibilities.

(I don’t recall a swing animation for First Fractal anyway…)

If solely watching a user wield First Fractal in PvP (with disregard for projectiles), the only way to distinguish it from someone attempting to wield a Zenith is by the sound; Zenith makes a sound on use, First Fractal does not, but their use animations are virtually identical.

The projectile does little to no damage in the first place

I guess somebody could suggest nerfing the projectile to 1 damage. This would make it so that you could still see the hackers that wielded it, but it does very low damage.

I thought it already did low damage?

In the video it deals 1 damage.