[Q2] Did you break the rules knowingly?
No, I don’t even know why I got banned, since I’ve never seen a warning. It’s probably because I “insulted” a guy who did something after I and other 5 people told him not to, ruining a farm in survival.
I mean, I just told him he’s an idiot.
From what I see on the rules on discord I haven’t really broke one, I wasn’t being disrespectful, I was showing someone that he’s stupid if he keeps ruining farms on purpose.

[Q3] Do you think your Ban was fair? If not, please provide a reason.
No, I don’t think it was fair. I was never warned, as I said in the second answer. I don’t think someone should get banned for getting “angry” for one second because, I repeat, someone ruined a farm on purpose in the survival server.

[Q4] Why should we unban you?
I’m a new but active player of the community, I’m always kind with everyone and answer questions of people who need help. Everyone knows it in survival. This is the only server I play in and I don’t really want to find another I like as much as this one, I literally still play terraria only for this server.

I was never warned 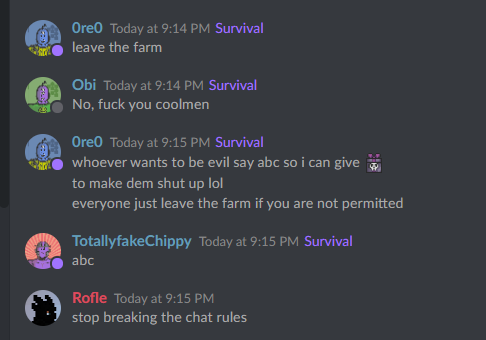 If you’re going to ignore chat other than to break the rules, it doesn’t seem like you should be able to use it at all.

I’m always kind with everyone

Other than when you blatantly aren’t. Seems a bit pointless to lie outright.

These are the server rules:

I suggest you read them over and show me you understand what rules you broke. That would be a good start.

Ok, I get It, also, the chat in Survival has been constantly filled with the messages about the spirits the last 2 days for a bug and it’s hard to read what all people say so this must be why I haven’t seen the warning, sorry.

I suggest you read them over and show me you understand what rules you broke. That would be a good start.

Missing action on this part.

I’ve read all of them now. I clearly broke Section 1 - #5 . I haven’t been respectful and mature at all when I’ve done that, I’m sorry for causing trouble.

You have been unbanned.