[Q1] Provide the Ban link or if none, the reason
I do not have the link, as i was banned in the server. I was given no reason as well, which I will link an image of. 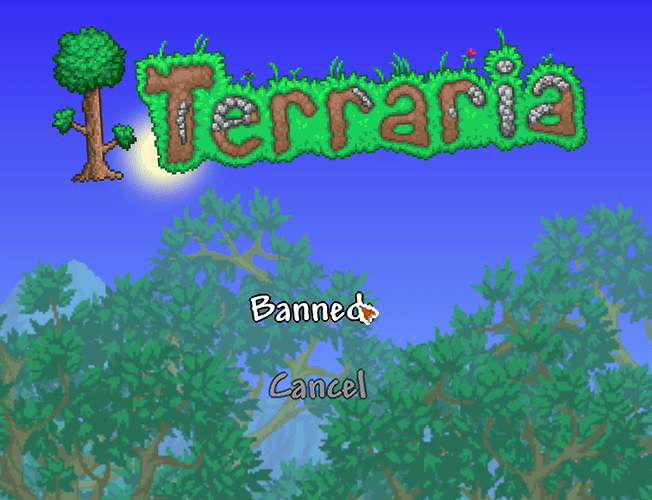 [Q3] Do you think your Ban was fair? If not, please provide a reason.
I do not believe my ban was fair, as I was not given a reason for it. It just says “Banned:” and nothing else. And no, I am not banned from the website or the DTP.

[Q4] Why should we unban you?
I just feel as if having no reason for a ban, not violating any rules since my joining of the server, and not being banned on the website or DTP should inflict an unban. I genuinely believe that the ban was unjustified and seemed to be unnecessary. However, if an admin can give me my actual ban reason, I will gladly make another topic to talk about that appeal as well.

Did you say any Terraria version like 1.4.0.4? That may have been the case.
Or you just have the same glitch I have where ur game crashes or something and u get banned

I got the same glitch as you did. My game crashes all the time and I got banned. And the version is 1.4.0.4.

Hmm ok, not sure if this is actually a gltich or somethin

Ik its not because of a legitimate ban by someone, because they cant type the command and your name and the ban link doesnt appear.

This was an automated advertising ban. It means you sent something in chat which triggered the rule. What did you send and what dimension did you send it in?