Rules broken
#1 Spam
Spam is not tolerated in the chat. An anti-spam plugin is in-use on the server to control spam while limited moderation is in effect, however, spam is punishable by Ban if the spammer shows no reluctance of future spam.
#2 Spam - Caps
Full Caps, repeated use of caps and mostly caps is not tolerated in the chat. It is not needed in anyway and is seen simply as spam. The same conditions apply to use of Caps as other types of spam.
Acceptable: Make sure that you DO NOT take it off until the end.
Unacceptable: MAKE SURE YOU DO NOT TAKE IT OFF near the end.
#5 Profanity and Related
Profanity and related language is to be used rarely, and may not be used against someone.

Users affected
I have only seen him insult 1 or 2 users (which I warned him to stop doing) but for all I know he could have insulted more when I was offline. 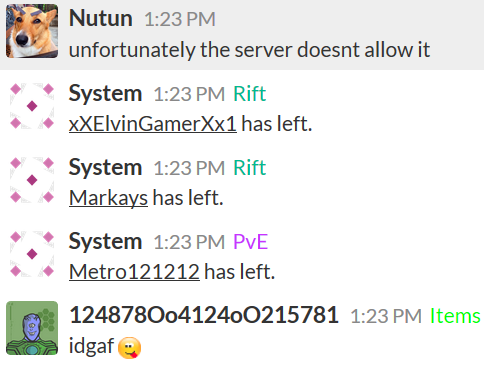 Clarification for last picture:
He accused me of being offended over such “little” things, so I told him that I was okay with swearing anywhere, but the server didn’t allow it.

Dimension
Rift, Items (he switches between these dimensions occasionally)

dude you can swear on the server? since swearing is allowed that makes this report uncomplete due to only 2 valid warnings

#5 Profanity and Related
Profanity and related language is to be used RARELY, and MAY NOT BE USED AGAINST SOMEONE.

I only made it in capitals because I don’t know how to make it in bold.

That dude also has a spammy name, which is against the rules. I’m in Nutun’s favor here.

The report wasn’t about the spammy name, it was about profanity, which was NOT used against someone OR excessively. I’ve said “idgaf” so many times I’ve lost count, and I swear way more than him. But yes, the name was indeed spammy.

The excessive profanity against someone was not shown in the pictures as it had happened the day before I posted this thread, I didn’t bother to take pictures because he stopped, but may have continued when I left, I’m not sure.

Admins can’t confirm anything without any evidence.

Vic is right. No evidence, no resolution.

There’s not enough proof to warrant a ban. If he breaks any more rules, be sure to add on to this report.