He is using dev wings. He has steampunk wings in his social slot so noone can see him with the dev wings 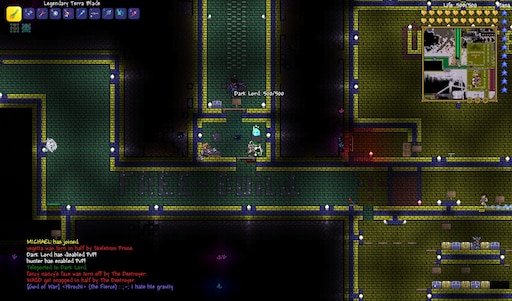 Steam Community: Terraria. Hacker is using dev wings. (He has steampunk wings in his social slot. He is really using red's wings or dev wings)

for this to be true you will need a picture of him wearing Red’s wings. (as slayer said)
If there was other crew or helpers or other dark gaming members form the site you will need their names and that they saw him wearing red’s wings.
at the moment you this is no help to me, or others and accusing him of wearing dev amour when you don’t have sufficient proof is not going to get him banned or other.

It’s true, he is wearing dev, he covered it in social once someone said he’s wearing dev.
So there’s no point of me reporting this guy cause you guys won’t believe me.

do you have screen shots?

I will watch for that guy,
meanwhile this topic will be remained as open one as if this
guy will show up with red’s wings again he will be banned.
Tip : Take a pic of him lying down when he isn’t moving much (walking or standing still will work)
and I will identify it and if needed will ban him.

If there is people wearing them why not ban them?
The wings

SeaCat, if someone is report for use of devs items he / she must bring a proof to it.
We can’t ban people just as we want, as if someone will reports someone els for the dev’s armor
we must see that it’s true and not a lie.

The devs armor suits arent banned items because that we are catching modified clients, as its the most common way to modify one as I know.