[Q1] Provide the Ban or if none, the reason
I was banned for Profanity and my ban id is 9969

[Q2] Did you break the rules knowingly?
Listen we got on the wrong foot about the profanity ban, I won’t lie I did use some profanity during the two days ago before you gave me warning and the first ban I got was justified, but when you gave me the warning on Sunday to not do it and I listened to you and didn’t start any problems. Then on Tuesday when you came on the server and I wasn’t even doing anything, then you come and reappeal my ban, after you banned me again I tried to discuss what happened here and one of the other mods showed once again proof from two days ago that was before the warning you gave me on the profanity. Of course I got mad because the mod gave proof before the ban warning.

[Q3] Do you think your Ban was fair? If not, please provide a reason.
It would’ve been fair if it actually continued, but I really listened and It didn’t happen since that day, I have been really enjoying this server and making some friends on here, and I even listened to your warning on the 24th, so why did you still ban me after I listened to you? So I don’t think it was.

[Q4] Why should we unban you?
Because I listened to your warnings after the warning you gave me, simple.

You need to follow the format. Add in the ban link for your answer to Q1 instead of just the ID.
Do not post a new appeal; edit your existing one. Post a reply here once you have made the corrections.

You have some explaining to do. First off, why are you making now a third forum account? I suspended your first one due to toxicity after I banned you ingame, and deleted your second one because you tried circumventing the first account suspension. Now you have created yet another forum account, and you think that you have valid claims to get unbanned? I will let you answer since you are rather persistent, but the odds of you getting unbanned after I determined you still will not abide by the rules even after being banned the first time are slim to none. If you want me to clarify why I banned you the second time, let me know. I will gladly show you.

Russ I think we should talk

how do you link the ban I forgot

You can get the full ban link by trying to join the server.

Well you still haven’t listened to what I said about the ban warning on Sunday. You gave me a warning for profanity towards other players which I listened to after you gave me the warning, then yesterday I wasn’t even doing any harm to anyone just enjoying a great server and then you come and ban me. About the second account. I was angry at the mod who was Nate for only showing me proof of the profanity before you even gave me the warning and that day was the 24th of April it is the 27th now and you banned me yesterday where I did nothing wrong, so I got very stupid and desperate and made an alt, I shouldn’t have made an alt to try and resolve things, but I felt like no one listened to me about me doing nothing wrong on the server after the warnings two days ago. And I really enjoy this server and have made some pals there, I swear I kept to the word after you gave me the warning on Sunday. Also I didn’t know the sexual references could get me banned, me and some other players were just making jokes about the golden shower weapon in the game and wasn’t directed towards any other player, but I swear Russ nothing happened with cursing at players after the warnings on Sunday.

Truth I have the link now edited in there

You gave me a warning for profanity towards other players which I listened to after you gave me the warning, then yesterday I wasn’t even doing any harm to anyone just enjoying a great server and then you come and ban me.

I actually gave you two warnings. Let me show you them. Notice how you never properly respond to any of them either. 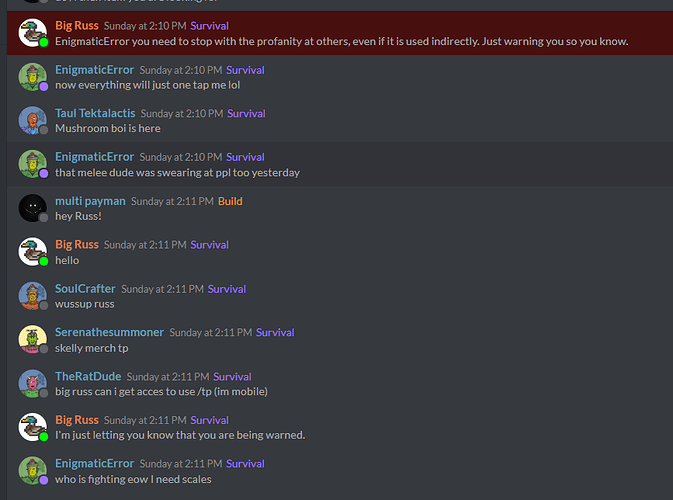 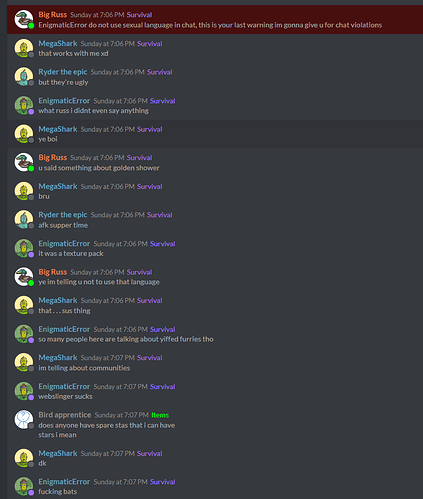 You still keep showing proof from Sunday, and I already told you that I listened to your warning after Sunday, also I thought cursing was fine as long as it isn’t directed towards a player, I said fucking bats, referring to the mob. Also I’m sorry on my part for not listening immediately after you told me.

I swear I don’t remember doing anything wrong after the warnings on Sunday. All of the players have been fine with me. Russ, I think we can still resolve this.

Here is you first offense, where you used profanity aimed at other players:

To which I replied:

To which I replied:

I made it clear that this was the last warning I was going to give you, yet you continued.

The following is what I used to determine you had in fact not learned from your previous ban.

Here you are seemingly being rude toward another player:

Here you are making a sexual reference even after I warned you previously not to: 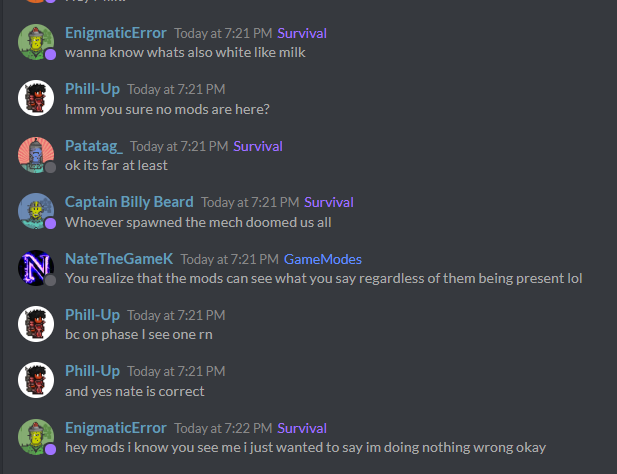 You say “hey mods i know you see me i just wanted to say im doing nothing wrong okay” because you are intent on testing your limits. While you did not literally say anything sexual, you are still referring to something of that nature, which I warned you about previously. Clearly you had not gotten my message still.

And here is your conversation between Nate I observed: 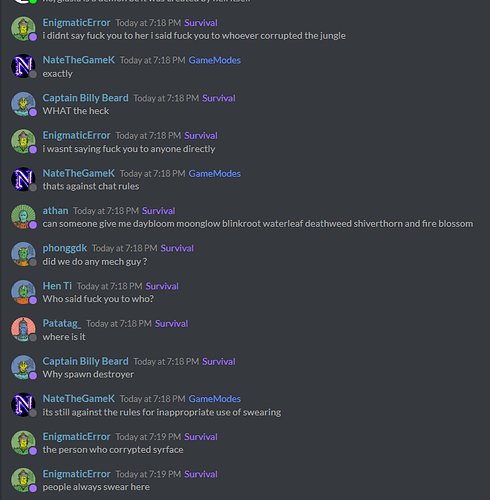 I did not take into account your profanity on this example, as you were not using it at anyone. What bothered me was when you said “people always swear here”. I determined from this you clearly had not learned your lesson. You are justifying using profanity at others by saying “people always swear here”. It is apparent that you clearly do not understand why what you said was wrong, and would likely have continued with similar behavior if I did not stop you. I was absolutely correct on my hunch.

After I banned you in-game, you came here to appeal. This is what you said to another member here on the forum, sealing the deal that you cannot be trusted to follow our quite simple set of rules: 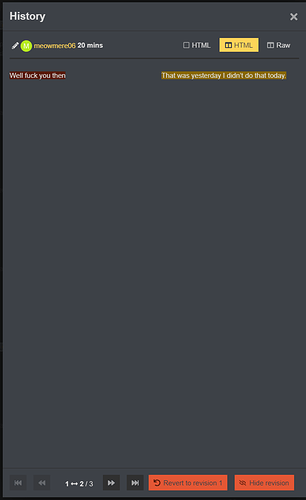 I had just banned you for chat violations, and you come to the forums and say that. Clearly, without a shadow of a doubt, you had not learned your lesson.

Do you still think that your ban is unfair, even after being given all this evidence?

I already said I’m sorry for that on my part and I didn’t realize the sexual wordings were banable if you were just joking around and I’m sorry I wasn’t listening to the part where even though I wasn’t cussing at a player I still was referencing a player, I’m pretty new here and I didn’t know much of the rules and I’m gonna look through the rules before playing the server if I ever do again. Also, when I said that player his ass was gonna get beat, I was trying to warn that player not to fight the boss alone I wasn’t even trying to be rude there. And I told the truth in a previous reply that I admitted to saying fuck you to the other mod on there because I was frustrated that I was getting further proof on the situation with the ban, and I immediately deleted that reply too.

It is far too late to say sorry and just forget what all transpired. Above are the reasons I rebanned you, and why you will stay banned, unable to appeal. I cannot trust you to act civilly with the rest of the server. I have given you many, many chances to correct your behavior, and I am not willing to let this continue any longer. Even as we speak, you are evading your original forum account’s suspension, which I strongly disapprove of. For all of the reasons I stated is why this appeal is considered denied. This is my permanent decision.