[Q2] Did you break the rules knowingly?
Well, I didn’t read all the rules, so It was like I don’t know if it’s really that bad, but also I felt like I’m maybe doing something really bad.

[Q3] Do you think your Ban was fair? If not, please provide a reason.
I guess so, well I wanted to help people on PvE survival, last few seconds before success I got kicked. Like, yes I was able to normally patiently (including not small number of dying) get items. But we weren’t much strong group this day so I was trying to get items and then wanted to save 2 boss fights, so they wouldn’t be ruined and waste of time. I want to be honest here, because I don’t want to have trouble.

[Q4] Why should we unban you?
It may sound like something cheap, but now I know how it feels to get banned from good server. As a phone player I didn’t find much of a nice servers, well, actually only 2 servers was really good and pretty fine. And this server was the better one of course. Because it has many possibilities what to play, item place where u can easily reforge, etc. I think it will be good to say “I’m sorry, it was stupid to do what I did”. I hope I wrote everything correctly, I hope and wish that I’ll be unbaned. If I will be, thank you for second chance.

@popstarfreas no, I didn’t try to evade ban. I was just playing terraria in my TL Pro and I tried randomly to check if I still have ban. (Edit: I was told it counts as modified client, I’m sorry, I didn’t know that, since it’s paid app from official store I thought it’s okay.) Then I saw I actually connected to serves so I was happy, I switched to my character what has login there, tried to log in and then I’ve got disconnected and see again that I have ban. So it definitely wasn’t attempt to evade ban. I just tried TL Pro, because I was wondering what it does and thought that my ban appeal was accepted. 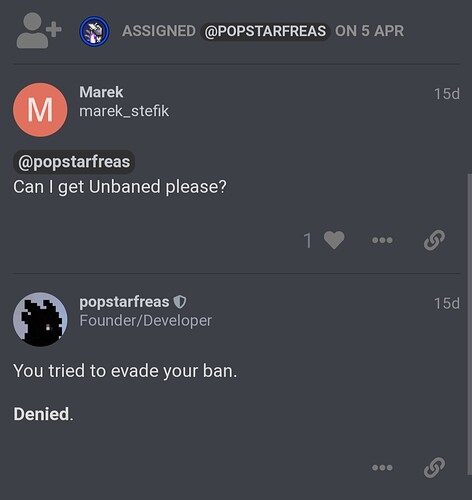 I added this to make everything about me clear. I’d never try to evade ban, Absolutely NOT.
Thank you for understanding of the person to who will be assigned this to. I hope everything is written correctly, makes sense and will be understood in the right meaning. I hope I’ll get unban or how I call it: “Second Chance”.